A group of well-informed experts on Syria warned that Turkey may face unprecedented challenges after a potential military strike against the Assad regime. 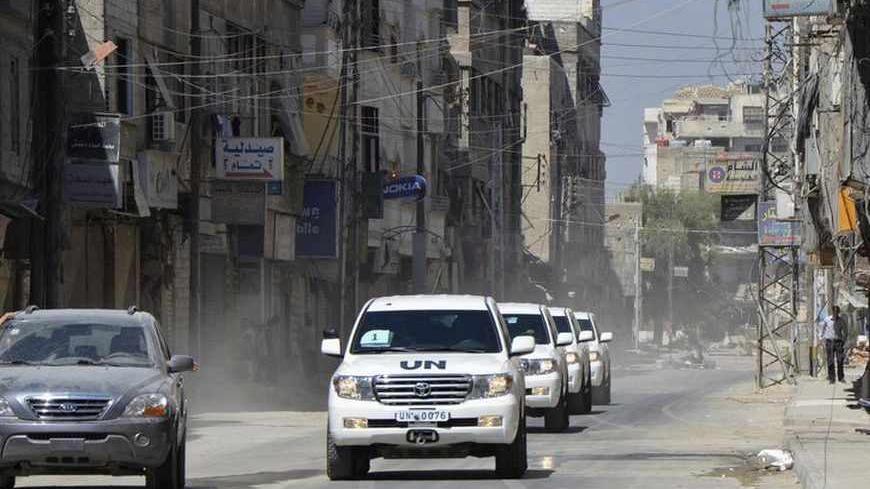 A convoy of UN vehicles carrying a team of UN chemical weapons experts and escorted by Free Syrian Army fighters (vehicle on left) drive through one of the sites of an alleged chemical weapons attack in eastern Ghouta in the Damascus suburbs, Aug. 28, 2013. - REUTERS/Bassam Khabieh

At Ankara’s Esenboga Airport, upon Turkish Foreign Minister Ahmet Davutoglu's arrival from Saudi Arabia on Wednesday, Aug. 28, he said, “The existence of a regime that uses chemical weapons against its own people in a barbaric way, right next to our country, is a risk in itself. We have never attempted to bring down a regime, but we have taken a clear stand against a regime committing crimes against its own people. I’m stating this to correct some incorrect perceptions [regarding Turkey’s position.] It’s not right to think that Turkey will follow in the footsteps of some plans or some decisions taken on its behalf.”

Davutoglu is right that under his vision Turkish Prime Minister Recep Tayyip Erdogan’s government has put in place an independent policy toward Syria, which did not work. In fact, on Aug. 28, experts at the 21st Century Turkey Institute discussed the potential military strike against the Bashar al-Assad regime and drew attention to four main points.

First, while no one blames Turkey for triggering Syria's civil war, many hold Turkey responsible for the escalation of the crisis. Turkey allowed its border to turn into a free-passage zone for anyone and everyone, and Turkey also kept a close eye on the flow of radical Islamist groups into Syria in an attempt to bring down the Assad regime. Second, many argued that Turkey declared a policy of regime change in Syria without having the necessary tools to back it up, putting Turkey’s national interests at risk. Third, although the use of chemical weapons drew strong condemnations, many at the conference expressed doubt over whether the regime was responsible. And last but not least, many question the legality of any outside military operation in the absence of a UN Security Council resolution. They also questioned the wisdom of Davutoglu declaring from day one — without obtaining parliamentary approval — that Turkey will take part in the “coalition of willing.”

Haldun Solmazturk, a retired brigadier general, for example, wondered why there is no nuance in the Turkish media about the military strike. “You don’t see this in the international media, but here in the Turkish media — possibly due to close control [of newsrooms by the Justice and Development Party (AKP) government] — they build a public perception that the military strike is already a given, which is not even open to question. This is an outright attempt to shape public opinion without discussing the legality of such operation,” he said.

Solmazturk completely objected to Turkey being an active part of such a military engagement with Syria. He said, “Davutoglu quickly jumps to the conclusion that this is a chemical weapons attack, and that the regime is responsible. It’s better, however, to be skeptical about the situation,” adding, “If we don’t discuss the legality of such an operation, and what it means for Turkey taking part in such a questionable operation, what else are we going to discuss? Somebody needs to throw the constitution booklet on their face to remind them of their obligations and responsibilities to this state. ... If you say yes to such an operation under these circumstances, you cannot guarantee that it won’t be used against you tomorrow.”

Bahadir Selim Dilek, a veteran foreign policy correspondent for Aydinlik, stressed this point, saying, “Middle East politics is often slippery, and it would be wrong for Turkey to engage directly in such an operation without taking into account as to how this may impact the Kurdish debacle.”

He continued, “If this operation is going to accomplish one thing, it will remind the actors in this region that America has not really moved that far away from the scene. It may disengage itself at the outset, but it still remains the sole power to take action when need be. And for the United States, Israel’s security is pivotal. This is also going to remind the actors in the region that there are certain alliances that can’t be crossed. Also, this could be a preparation for the bigger operation — that is Iran. It’s no secret that Israel considers Iran an existential threat and can’t stop talking about its nuclear program. These are all connected to each other and therefore Israel’s security cannot be ignored in the decision-making process while heading to this operation.”

Yasin Atlioglu of Nigde University, who lived in Syria for years, questioned Turkey’s perception of the Arab Spring. “Turkey did not actually have a strong reaction in the beginning when events started to erupt, but then we were somehow misled,” Atlioglu said. “Turkey declared a policy of regime change without actually having the tools and means to actually carry this out. It completely opened its borders to people without any control. No one knew who was passing through these borders, and that, in a way, encouraged the passage of radical Islamist groups into Syria. If Turkey had stayed neutral, the events would not have escalated to this level. Assad had actually delivered long-promised reforms in the first six months [after the events started]. This conflict could have been resolved differently.”

Mehmet Sahin of the Gazi University Department of International Relations stated that although he does not 100% agree with the AKP's Syria policy, he is nevertheless a supporter of the party, and wishes this operation had taken place yesterday. “I believe that the mission of this operation is to prepare the parties for the Geneva II talks,” Sahin said. “The United States wants Assad to clearly understand that he is not going to be able to govern the country, while at the same time it will warn the opposition that it needs to back away from supporting [Jabhat] al-Nusra-type radical groups.”

Oytun Orhan, a prominent researcher at the Center for Middle Eastern Strategic Studies (ORSAM), also views this operation as an attempt to pave the way for a political solution. “They seem to be pushing for a political solution at the Geneva II talks. The Syrian regime, lately, has progressed well, and the opposition lost some ground. So, they may attempt to bring a balance to this equation and force the regime to come to the table to find a political solution,” Orhan said. “The Russian decision to stay distant from all this, and its announcement that it won’t get involved militarily [if the US and allied forces strike against Assad strongholds] may be explained through this prism.”

Salih Akyurek of the Wise Men Center for Strategic Studies (BILGESAM) noted that the Turkish people still don’t support a military operation into Syria. The last time a public opinion survey was conducted, he said, was in July 2012, a month after Syria brought down a Turkish jet. He speculated that the popular approach to this matter would be the same.

“A clear majority of the Turkish people want to see the Syrian crisis resolved through political negotiations, not through a military operation,” he said. “Forty percent of the people do not want Turkey to be part of any military engagement with Syria. Thirty-eight percent consider that Turkey can provide logistical support to coalition troops if there is a UN Security Council resolution, and if that becomes a NATO operation. But only 18% support Turkey taking an active part in a military operation when there is a UN resolution, and if that becomes a NATO operation. Seventy-two percent believe that such an operation will help imperialistic powers’ ambitions in the region.”

When asked about the recent popular protests in big cities like Ankara and Istanbul condemning the Assad regime’s atrocities and the Egyptian military’s coup, he said, “It would be wrong to judge the society as a whole just based on a few protests in the streets. The Turkish people don’t want to take part in a military strike against Syria. There is no public support for such action.” Akyurek also said that when the opinion survey was conducted a year ago, there was no fighting between the Syrian Kurdish groups and radical Islamist groups like Jabhat al-Nusra. “When we asked people what happens if Syria gets divided, would there be a Kurdish state in the north of the country? Sixty percent said yes.”

Atlioglu argued that if the aim is to really bring the parties to the table in Geneva for a political solution, there needs to be a way to deter radical Islamist groups, like al-Qaeda-affiliated Jabhat al-Nusra.

“Many considered the Assad regime an Alawite regime, as if isolating the other sects and ethnic groups. The reality, though, is that it's a coalition regime, where the Assad family controls the power. People, however, now see that those radical groups are even more horrifying. And this increased support for the Assad regime,” he said. “With a potential strike, though, there could be a situation similar to the 1975 Lebanon civil war that could last many years in Syria, as well.”

Orhan also speculated that Syria might be heading toward physical division, specifically between Sunnis, Kurds and areas that the regime controls. In all these scenarios, the experts warned that while the Turkish government may posture that the international community finally listened to their calls and took action against the Assad regime, it’s far from the truth. This potential military action is nowhere close to what Erdogan wished to see happen, and Turkey may end up facing unprecedented challenges.

“There could be attacks like that happened in Reyhanli,” said Atlioglu.