The alleged chemical attack in Syria has revealed a sectarian rift in Iraq, with some Sunnis accusing Syria’s Alawite regime, while some Shiites blame the massacre on the opposition. 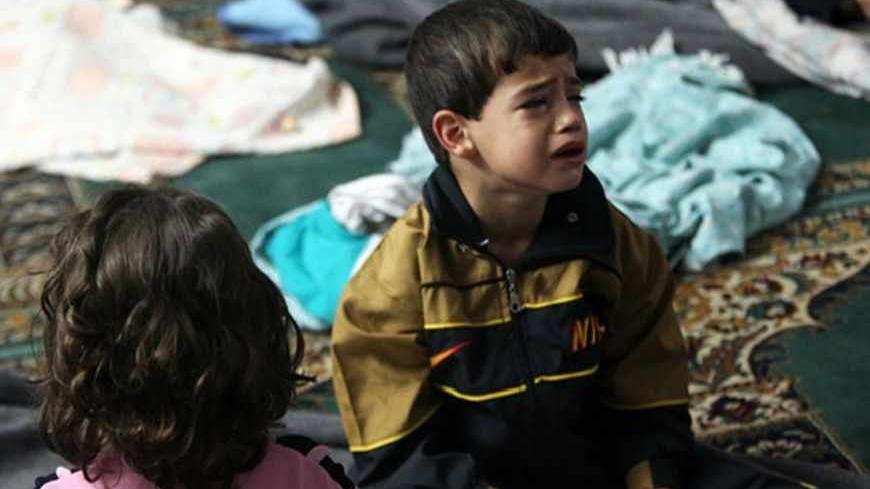 A boy who survived from an alleged chemical attack cries as he takes shelter inside a mosque in the Duma neighborhood of Damascus, Aug. 21, 2013. - REUTERS/Mohamed Abdullah

The world was surprised by the news that a chemical massacre took place on the outskirts of Damascus on Aug. 21. The Iraqi public, however, followed that event with even more interest because of a similar massacre committed by former President Saddam Hussein 25 years ago in Halabja, in northeastern Iraq. So, video clips, newspaper columns, photographs and Facebook postings about the massacre quickly spread in Iraq.

Many recalled the world’s silence on the Halabja massacre — back then, the media did not cover it and international organizations paid no attention to it — warning that conflicting interests among the great powers may prevent any action on the Syrian massacre.

Those who followed the details of the Syrian massacre to identify the perpetrator split into two camps: those who accused the government and those who accused the rebels. That split revealed the widespread sectarian conflict in the region and Iraq in particular. Some Sunni observers considered the event another example of the crimes being committed by the Alawite regime and its Lebanese and Iranian allies. Some Shiites reacted by denying that the Syrian government committed the massacre and provided evidence implicating the rebels instead, especially the Salafist forces. Others tried to link the 1988 and 2013 Syrian and Iraqi chemical attacks to the Baath party, which both Saddam and the current Syrian leadership belong to. Thus, they refused to clear the Syrian regime of the crime since that regime works on the same principles and doctrine of the Iraqi Baath party. They also asked the Iraqis to refrain from treating the Baathist regimes in Iraq and Syria according to different standards.

Meanwhile, the secular Iraqi street focused on the massacre itself, accusing all parties involved in the bloody fighting in Syria. Al-Monitor interviewed Iraqi Facebook activist Areej al-Khalidi about the Syrian massacre. Khalidi said that what is happening in Syria is insane by any measure. He said that the Syrian regime is the main party to blame for acting unwisely and for using excessive force and that both parties should stop the fighting whatever the cost — because of the high toll in terms of innocent children killed and the daily scenes of massacres for over two years, which should be enough to persuade the parties to renounce violence and move toward other options to resolving the crisis.

The criminal event in Syria was accompanied by reports that al-Qaeda intends to use chemical weapons against the Green Zone in Baghdad and Shiite areas, causing fear in the street and fanning the sectarian tensions. That declaration increased the likelihood that it was the Salafist rebels who committed the Syrian massacre, although some have doubted that and considered it a terror scenario designed for specific political goals.

Finally, in light of the already charged Iraqi sectarian atmosphere, any negative development in Syria will affect the situation in Iraq, where the group Islamic State in Iraq and Syria (ISIS) published a video clip showing the execution of allegedly Alawite truck drivers. The executions happened in Anbar province in retaliation, according to the killers, for what is happening to the Sunnis in Syria.