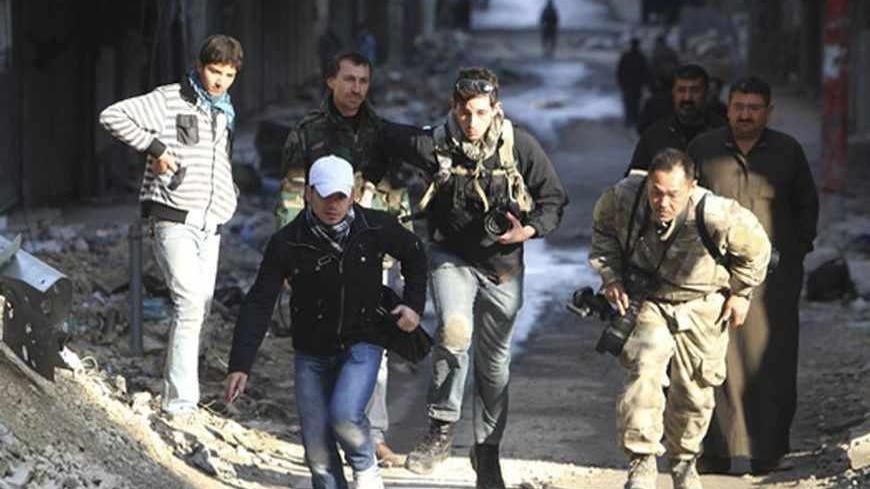 Journalists Bryn Karcha (C) of Canada and Toshifumi Fujimoto (R) of Japan run for cover next to an unidentified fixer in a street in Aleppo's district of Salaheddine, Dec. 29, 2012. - REUTERS/Muzaffar Salman

As the battle against President Bashar al-Assad has attracted more extremist groups into Syria, the country now becomes one of the most dangerous places for journalists. Abductions have increased sharply this year. Western journalists think twice before covering the war, and Syrian fixers have to spend more time on finding abducted journalists instead of helping them report.

Dutch war reporter Bud Wichers, 35, admits that the risks of abduction have significantly increased, but when a Dutch media agency asked him to cover the conflict in Syria, he decided to go, he told Al-Monitor on Aug. 12 from Syria. For his own safety, he keeps his exact location to himself, after taking extra measures to guarantee his safety.

“As a war journalist, it is my duty to report stories from Syria, but I try to limit the risks as much as I can. First, you really need to have good connections before you enter the country. Second, make sure you have enough money to hire a good fixer. And third, try to find a fixer who protects you like you are his brother or sister. Someone who does everything to get you out when you are abducted.’’

The New York Times reported on Aug. 9 that foreign journalists are particular targets, mostly Europeans who have ventured into Syria, usually without the permission of the Syrian government. According to the Committee to Protect Journalists, a New York-based advocacy group, there are at least 14 cases of local and international journalists who are missing or have been abducted this year, but the estimated number is believed to be significantly higher, the New York Times writer said.

Local contacts play a crucial role in ensuring safety for reporters. Wichers has been to Syria several times, using the same Syrian fixers and drivers. Usually, this works out perfectly, he said, but when he crossed the border earlier this week, he found out that his previous driver had been kidnapped while working with another Western journalist.

“This scares me a lot, because it’s so unpredictable. The driver is a good man, I know for sure, but I don’t know anything about the fixer. Maybe the fixer betrayed him and the journalist, and turned them over to an extremist group. Most of the abductions happen because the fixer is not reliable, but sometimes the fixer is abducted, too, while working with the journalist,” he told Al-Monitor.

Syrian fixer Abu Omar, 29, told Al-Monitor that groups like the Islamic State in Iraq and Jabhat al-Nusra play a significant role in the abductions of Western journalists. “Sometimes they want money, but most of the time we don’t know what they want, so we have to make a lot of calls to find out,’’ he said on Aug. 12.

With his brother, Abu Ahmed, he guides journalists through the streets of Aleppo, Idlib and Homs. In the beginning of the war, they were activists working for the Free Syrian Army (FSA), but when the conflict dragged on they became fixers for local and international media agencies like CNN and The Guardian. Now, they spend most of their time tracing reporters who are missing.

“When a journalist is kidnapped — foreign or Syrian — the news spreads fast, and we get a lot of calls. So I try to call or visit some people to find out what the abductors want. If we find out where they are, the negotiation process starts. If the group wants money, we deliver that message to the reporter's employer.”

The last couple of months, they have helped find Italian, Syrian and French journalists, and reporters such as Susan Dabbous, an Italian freelancer who was held by Jabhat al-Nusra, and Richard Engel and his crew from NBC News, who were kidnapped by a pro-government shabiha militia.

The brothers work behind the scenes, just like many others, to help rescue the reporters, even if they are not acquainted with them.

Omar said, “Groups like the Islamic State in Iraq and Jabhat al-Nusra destroy this country. In the beginning, the war was a conflict between the regime and the FSA, until they stepped in. As an activist, a Syrian and a fixer, I need the reporters to tell the truth. And that’s why I help them, even when I don’t know them personally.”

Wichers, who met the brothers several times during his trips to Syria, confirmed the story and said that the Syrian fixers use their local connections to help abducted reporters.

Omar and Ahmed both said they do not get any money for doing so.

Although Omar regrets the fact that a lot of journalists are afraid of going to Syria right now, he would not recommend that freelancers go unless they have enough money to pay for security. He even advises well-experienced CNN reporters to invest in multiple cars and local Syrian "bodyguards." This costs around $600 a day.

“Syria is not the same anymore. You will find danger in every corner. Freelancers who just go without an idea of what’s going on exactly are an easy target. The poor economic conditions increases the possibility of betrayal by fixers who are only in it for the money,” he told Al-Monitor.

Some abductions appear to have been carried out by armed insurgent extremist groups and criminal networks seeking ransom in cash, weapons or both. But others have no declared motive, the New York Times reported.

Omar thinks that the last scenario is even more dangerous, “They just disappear. A year ago, it was most likely that these journalists were kidnapped by regime forces, because they reported stories about the FSA. Right now, you can never be sure. Extremist groups also kidnap because they want to scare people, or punish Westerners by kidnapping their people.”

Behind the scenes, the brothers are still trying to find James Foley, a US journalist who disappeared on Thanksgiving Day (Nov. 22, 2012) in Idlib. Like many others, Omar believes that he was abducted by pro-regime forces. But Foley is not the only one the brothers are looking for. The list of abducted journalists gets longer and longer, as the New York Times reported on Aug. 9.

(To ensure the safety of the two Syrian fixers, I changed their names into Abu Omar and Abu Ahmed.)