It appears Turkey’s president and prime minister are playing a "good cop, bad cop" routine on Egypt, but their differences are real. 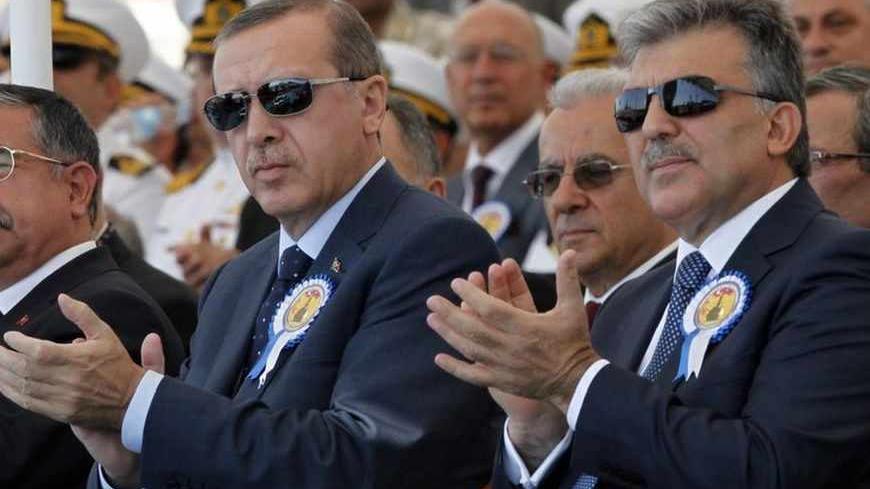 The holidays — Ramazan Bayrami, or Eid al-Fidtr — marking the end of the holy month of Ramadan and the weekend that followed allowed Turkey a relatively long respite after the tensions of recent times, nourished every day by a new round of polemics. For about a week, Turkey was freed of this politically hot and tense environment.

True, Prime Minister Recep Tayyip Erdogan had spoken on the first day of the holidays, and at one point blasted the Nobel Committee for awarding the 2005 Nobel Peace Prize to Mohamed ElBaradei. Perhaps, however, it is because Turks are so used to their prime minister lambasting someone or another on any given day that they have learned to largely ignore his rants. Turks were also otherwise busy trying to get themselves to resorts during the hot summer days capping Ramadan. In the Greek islands near the Turkish Aegean coast, the number of holidaying Turks was equal to the Greeks enjoying their summer.

Erdogan’s out-of-the-blue reference to the Nobel Committee, and scolding of the Norwegians, was in a part of his speech about Egypt. It was disjointed, rambling. While advising Turks to have three children, so they can contribute to the fatherland, he strayed onto the Egyptian coup. While explaining his rejection of the coup, Erdogan suddenly appeared to remember that ElBaradei was now Egypt's provisional deputy president and then drifted to ElBaradei receiving the Nobel. Thus, the Nobel Committee came in for its share of Erdogan's anger.

In reprimanding the Nobel Committee, he uttered, “Eyy, Nobel how could you award a peace prize to a man who was to become the deputy president of a military coup eight years later?” He then chided Norwegians for lacking “vision.” His pronounciation of “Eyy, Nobel,” as if he were addressing a person instead of the Nobel Committee, received a few satirical comments.

Some people claim to have noted a “deterioration in [Erdogan's] physical and mental state” following the Taksim Square-Gezi Park events, including the way he rambles on in his speeches, lecturing aimlessly without restraint, saying whatever comes to mind because of the total absence of checks and balances on his political power. His holiday speech was a classic example. Fortunately he delivered it during a holiday, depriving it of the public's attention.

It was also because of the holidays, however, that remarks by President Abdullah Gul did not receive the attention they deserved. The Financial Times and El País (Spain) both published articles on Egypt penned by Gul, the substance of which was significant because it reflects important and deep cleavages among Turkey’s governing political powers.

While Erdogan was declaring, again, that he did not recognize the new administration in Egypt, fuming (in 2013) about a 2005 Nobel Committee decision, and aligning his government with the Muslim Brotherhood, Gul was signaling his intention to establish ties with Egypt's new rulers based on a real politik approach to save that country's future.

Part of Gul’s thinking is to prevail upon Egypt's rulers not to marginalize the Muslim Brotherhood. He is worried that pushing the group outside the system could lead to even more bloodshed and open the way to a military dictatorship that will distance Egypt from democracy.

The Turkish president is well aware that the Brotherhood has a role to play that is different from what it is doing today. By stating that the “coup in Egypt was avoidable,” he was discreetly hinting that deposed president Mohammed Morsi had made mistakes. He suggested engaging all parties to steer Egypt toward democracy, with particular attention on Europe, which he sees as an “assurance of democracy,” and to Turkey-European relations.

Observers will note that President Gul’s approach to the issue of Egypt is contrary to Prime Minister’s Erdogan's, which practically advocates boycotting the new rulers in Cairo, and seems intent on mobilizing Turkey's ruling Justice and Development Party as an “auxiliary force” for the Brotherhood. Erdogan never misses a chance to slash out at Europe whenever he opens his mouth.

The Turk's would have recognized this cleavage had it not been for the nonpolitical ambiance of the holidays. One would not be off the mark to think that Gul’s articles were written for a Western audience, geared to send a sober and rational message from Turkey on Egypt.

The West needed to hear a sane response from Turkey on complex international issues, as everything from Erdogan has caused disappointment. This is why one can view Gul’s Financial Times and El País articles as a message of “don’t give up hope on Turkey.”

At this point, one question is inevitable: Are Gul and Erdogan playing a 'good cop, bad cop' routine? Have they decided to role share? My response to this question is short and simple: I don’t think so.