The Turkish government fears political dissent will find its way to football games, so one major club takes controversial measures to prevent it. 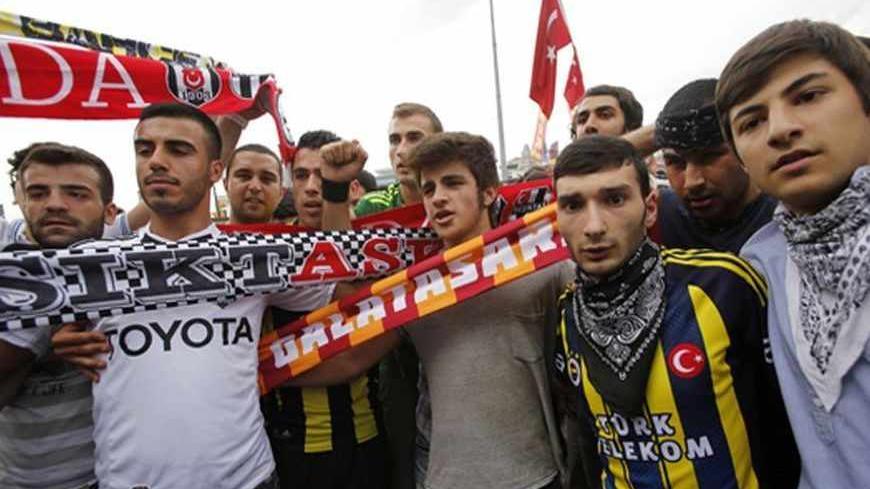 First up, a disclaimer: I love football — or soccer for those who insist to be American about it — and have been a Galatasaray fan my whole life. So any favorable sentiment you might detect toward the supporter group Carsi (pronounced char-shi) profiled in this article, has nothing to do with team colors. Indeed, the group represents a rival Istanbul club, Besiktas. Their blood runs black and white reportedly; mine, on the other hand, is pure yellow and red — of course!

I am only half-kidding. Not many things in the world can be as equally forceful in uniting people and breaking them apart as football is in Turkey.

The new season will kick off here in a few days despite the August heat. Fans of all ages are eager to welcome the latest foreign transfers and local rookies to the Super League, watch old talents play for new teams, wear their lucky jerseys and favorite ball caps to the games during which they will put their rusty vocal chords back to good use as they breath in and out the hope, joy and the occasional fury of the best kind of competition on earth. There at the stadium, for 90-odd minutes they will feel unburdened with life, they will feel free.

These days, the Turkish government seems to fear exactly that — the sense of freedom and ergo, the power that football fans experience when they cheer together as a crowd. Hence, the announcement on July 30 of the ban on political slogans at the games. “We are adding bad political and ideological slogans to the list of illegal demonstrations in football stands, or behavior not complying with sporting ethics,” Interior Minister Muammer Guler said. He did not have to elaborate on what a “bad” political slogan is. Everyone got the message.

Upon Guler’s announcement, various versions of a news story warning the public about a repetition of the Gezi Park protests popped up in the Turkish press. “According to the intelligence reports presented to Prime Minister Recep Tayyip Erdogan’s top advisers,” the story said, “There will be more demonstrations in September and October as the groups that organized the recent protests in Istanbul have now chosen universities and stadiums for their provocative acts.” Deputy Prime Minister Bulent Arinc confirmed the story soon after.

Governments like self-fulfilling prophecies, I suppose. In fact, one does not need to have access to sensitive intelligence to know the football season and the academic year will soon bring back the crowds to the Turkish cities. It happens every autumn. And when the crowds return this year, their memories of “Gezi” will still be fresh. Notwithstanding Ankara’s conspiracy theories that paint the demonstrations as carefully-timed events organized by “dark powers” that are gearing up to strike yet again, the crowds will surely remember what transpired on Istanbul streets in June.

“The sane youth is up and coming, that’s what they are afraid of,” Cem Yakiskan said in an interview with sendika.org on Aug. 5, “They are afraid because they know damn well that people will chant slogans.”

“Cem Abi” to most of his fellow Besiktas fans, Yakiskan indeed plays the role of an “abi” (older brother) in the Carsi group which takes pride in  having no established hierarchy.

“Carsi” means marketplace in Turkish. The supporter group which was formed in the early 1980s gets its name from the lively marketplace located in the center of Besiktas — one of the few Istanbul districts that has managed to preserve the festive atmosphere of an old neighborhood despite its very central location and relative affluence. It is there at the large fish market and the surrounding restaurants, bars and cafes that Besiktas fans in their black-and-white jerseys hang out before matches.

It was there, also, that a few hundred Carsi members gathered one evening in June and walked toward Taksim Square, where the police had begun dousing the demonstrators with pepper spray and water cannons. “As we arrived at Harbiye [adjacent to Taksim], our crowd had already grown to 5,000,” Yakiskan told the BBC, “We saw people were hard done by the police. … That’s why we went.”

Soon, Carsi became a major component of the action in Istanbul. The group which uses a stylized version of the Anarchists’ circle-A in its logo and has adopted the motto “Carsi is against everything,” participated in the demonstrations with the renowned discipline of their covered stands at the Inonu Stadium —  Besiktas’ home ground. At one point, some Carsi members even chased away a water cannon with an excavator they borrowed! The police, in their turn, detained several Carsi members including Yakiskan for days.

Describing itself broadly as “leftist,” Carsi disclaims any affiliation with a political party. This does not stop the group from coming forward for various causes. Over the years, Turkish public saw Carsi carry placards for a nuclear-free Turkey and produce videos against an alcohol ban. Always coming up with clever quips to challenge authority, the group even protested the International Astronomical Union in 2006 for declaring that Pluto was no longer considered a planet. The placard Carsi flashed at that week’s game read, “We are all Pluto!”

Not surprisingly, Turkish government’s ban on political slogans in the stadiums is viewed as a measure mostly against Carsi. As James Dorsey points out in his blog on Middle East football, “The ban was particularly urgent because Besiktas would be playing its home games in Istanbul club Kasimpasa SK’s Recep Tayyip Erdogan Stadium while its own stadium is under renovation.”

The management of the Besiktas football club complied with the government’s ban by forcing their season ticket buyers to sign a pledge not to shout political slogans at the games. Failure to abide by the pledge could result in the cancellation of season tickets. And as Youth and Sports Minister Suat Kilic announced recently, with new security cameras and electronic ticketing it is now easier for the government to monitor who does what at the games.

However, if the political chants during last week’s Fenerbahce-Salzburg game in Istanbul is any indication, Turkish fans are not likely to simply shut up because “Big Brother” is watching. Indeed, Besiktas’ management is under sharp criticism for expecting exactly that from their supporters.

“While you are at it, why don’t you declare with a martial law manifesto which slogans you will permit,” wrote Gulengul Altinsay on Aug. 9. A football critic with good access to the Besiktas club, she did not mince her words: “If that doesn’t work, you can fill the stands with mannequins. You have no other choice, because this nation uses its wit when silenced.”

That wit, as Altinsay also noted, has produced such great examples of verbal irony and sarcasm in the past that one can only expect Carsi and others to keep up with the tradition of resistance through humor. Let the games begin!

Yasemin Çongar is the author of four books in Turkish, among them Artık Sır Değil (No More A Secret), a detailed analysis of the US diplomatic cables on Turkey first made public by WikiLeaks. A former Washington bureau chief for Milliyet (1995–2007) and a founding deputy editor-in-chief of  Taraf (2007–2012), Çongar is currently based in Istanbul and is a columnist for the internet newspaper T24.