The failure of Islamism in power and the key challenges facing the new rulers in Arab societies that saw uprisings and regime changes are now emerging. 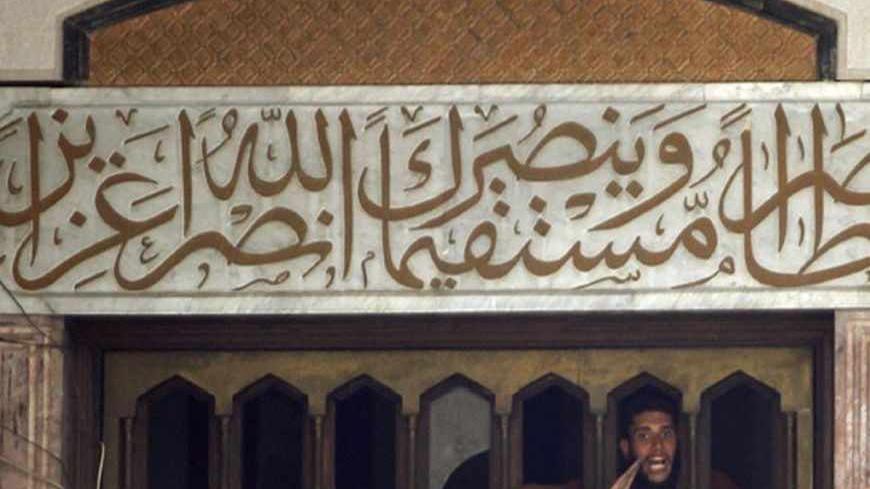 A protester supporting ousted Egyptian President Mohammed Morsi shouts through an opening at the top of an entrance to the al-Fath mosque on Ramses Square in Cairo, Aug. 17, 2013. - REUTERS/Amr Abdallah Dalsh

In an article titled “The Arab Awakening at Two: Facebook to Faith Book,” written on the second anniversary of the successful popular uprising in Tunisia and Egypt (Jan. 28, 2013), I argued why the Islamists in the two countries were able to grab power via the ballots — either alone or in an alliance they control. The post-authoritarian phase saw the emergence of Islamist-dominated or influenced regimes. The same could be said also about Libya, where Islamism was tempered by the strong tribal and regional factors. In Syria, the key most-influential forces in the opposition fighting the regime are different Islamist groups including the Muslim Brotherhood, many Salafist currents and different factions of the al-Qaeda family.

That Islamism reached power was no surprise for many reasons. First, it is about being the only organized force with a strong ideological motivation and an iron discipline. Second, it is about the attractiveness of its message and the promises of better life it carries. In fact, this attractiveness stems from the fact that Arab societies are undergoing great inequalities and humiliation and witnessing the re-emergence of religious conservatism and identity revivalism under different religious forms. Third, the Muslim Brotherhood movements have strong financial and organizational capabilities.

All these elements empower the Muslim Brotherhood to perform efficiently in an almost political and organizational desert imposed by the former regimes. Yet, current events in Egypt and Tunisia show that the Islamist phase of the second Arab awakening — a term I prefer to "Arab Spring" — brought by the popular uprising, was a failure.

An illiberal democratization process that was initiated under the Islamist influence led to great opposition from all those who believed that the age of liberty started after the fall of dictatorship. Such liberty or freedom, not to be defined or shaped in a narrow, selective way by one party — the Muslim Brotherhood in this case — in the name of an ideological superiority which the party believes to defend, promote and impose in different ways.

The identity issue or the reshaping of the identity of society took precedence over the much-needed — yet absent — socioeconomic program for developing societies suffering for a long time from an economic crisis with severe social repercussions at the basis of the different uprisings.

The Islamists in power remained deaf to the increasing calls for addressing these very basic issues. Instead, they were engaged in the re-Islamization of Muslim societies. They were also insensitive to the need for a real power-sharing process based on inclusiveness and on working to form a large national consensus to build post-authoritarian regimes. Hiding behind a definition of democracy based exclusively on elections at the takeoff phase of change and national institution-building was more than a costly mistake. It led to strong polarization in the concerned societies and created a sort of domestic cold war over the issue of legitimacy and governance.

The ousting of the Egyptian regime and the severe crisis facing the Tunisian regime in particular, as well as the continuous inability of Libya to take the road of normalization, usher in the beginning of the third phase of the Arab uprising. The fall of the wall of fear that launched the first phase should signal that power under any name is no longer a sacred, untouchable, feared matter.

It is time for the two poles of the conflict — the Islamists and their opponents — to understand that the rules of the game must change and that old rules of exclusion and demonization of the other under different names should not be adopted. The new agenda of the third phase of the uprisings is one of different attempts at a new regime-building after the failure of the second phase.

The issues that it has to address are the ones of institutionalized power sharing, political inclusion, the upholding and consolidation of the concept of citizenship, accountability and good governance, established power-sharing rules and particularly social justice creation and genuine economic development. It is a tall agenda that necessitates a serious all-encompassing national dialogue.

The alternative to such a process is either chaos or dictatorship under different names, old or new ones, with direct impact on other states seeing revolutions, uprisings or strong social tensions.