While Turkey was once praised as a "model"  for the region, the recent economic woes facing Ankara and Erdogan’s insufficient response have shaken Turkey's perception in Arab countries. 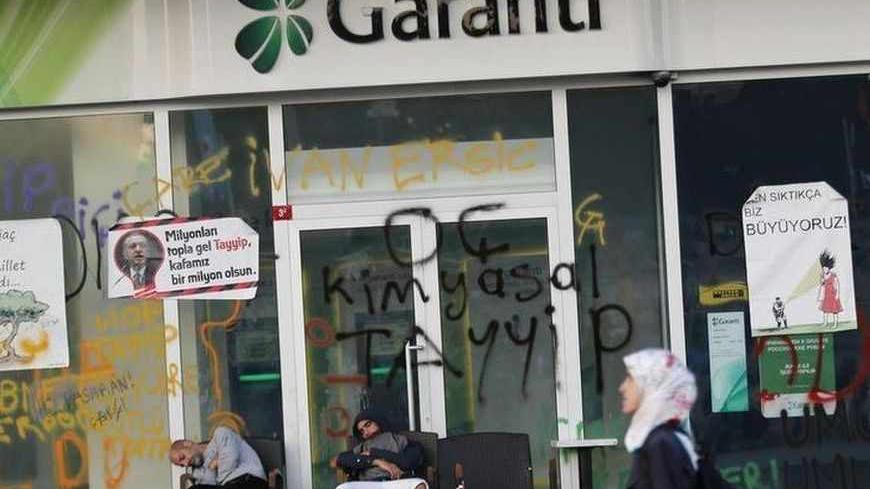 Protesters sleep outside a branch of Garanti Bank in Istanbul's Taksim Square, June 3, 2013. Turkish protesters clashed with riot police into the early hours of Monday. The posters read, "A tree died, a nation awoke" (L), "Come with millions Tayyip" (2nd L), "You spray, we are growing" (R). - REUTERS/Murad Sezer

Our Arab societies have gotten used to conspiracy theories, in which they seem to find justification for their failure to catch up with the train of modernity. Perhaps they are subconsciously affected by their regimes, which use these conspiracy theories to establish their legitimacy and promote the propagandist media of the ruling party.

The infection has reached the Turkish government and its head, Prime Minister Recep Tayyip Erdogan. This is surprising and shocking.

The man who put Turkey on the path of economic growth and took sound steps in democratic reform — whether by limiting the military’s authority over constitutional institutions or reducing the influence of judges in political life — reacted angrily to the events of Taksim Square and the following collapse of the Turkish financial market. He denounced the events as a foreign conspiracy that is being plotted by "the enemies of Turkey," and the so-called "interest rate lobby."

There is no doubt that Turkey — a rising power both politically and economically — has adversaries. It's a big possibility that the countries competing with Turkey for regional influence would seize any opportunity to destabilize the Erdogan government, which has confronted both Israel and Iran, albeit in different ways. However, it’s quite surprising for a ruling party, one characterized by its rationality, to overlook key structural problems afflicting Turkish society and its economy, and to use shady accusations to evade necessary reforms or rectify mistakes in the government’s performance.

The fall of the Istanbul Stock Exchange index by 21% compared to the month of May, and the decline of the exchange rate of the Turkish lira by 8% are mainly due to circumstantial reasons related to the international economy. It is specifically linked to news circulated by finance and banking circles about the intention of the US Federal Reserve to raise interest rates. This news is based on brief statements made by Chairman of the Federal Reserve Ben Bernanke, in which he expressed an intention to taper quantitative easing, according to which the equivalent of $85 billion of US Treasury bills are being purchased on a monthly basis. In fact, such a decision was much expected by the US financial authorities, especially after the emergence of potential indicators of growth. The unconventional monetary policies previously adopted could not continue indefinitely, and may cause inflation and a decrease in purchasing power.

Emerging economies — such as Turkey, India and Brazil — have benefited the most from the quantitative easing strategy. Lower interest rates in these so-called developing economies led to a flow in capital aimed at higher returns. This was a major cause for the economic leap in these countries and their quick exit from the tunnel of the global financial crisis.

This grace period ended when the US Federal Reserve announced a rise in interest rates. Chances as such usually continue for a limited period of time, and should not be adopted as a fixed economic given. Here's the bottom line: Once talk of a possible increase in interest rates began, some sources of capital diverted from these economies, which is a normal move by markets. Countries that did not take advantage of the opportunity and undergo structural reforms were mostly affected, in addition to those that are suffering from pressing political or regional circumstances, such as Turkey.

The Turkish economy has achieved steady growth in the last decade until 2012, and has avoided the repercussions of the global financial crisis. However, it today suffers from structural problems, namely the size of deficit in its balance of payments and the method to finance it.

Turkey has relied, and still does, on foreign investments and short-term portfolios to finance the deficit. Attracting capital was the cornerstone of Erdogan’s economic strategy aimed at achieving growth and turning Istanbul into a global financial center. The economic facts today do not facilitate his mission compared to the previous period. Attracting capital is a fundamental obstacle to the economic growth cycle. The economic indices reached minimum levels last year, and the results of the first two quarters (3%) of the current year did not reach the expected 4% growth rate.

The rising global interest rates, the increase of deficit in the balance of payments and growing domestic debt are reasons for a potential rise in interest rates on Turkish bonds, and not vice versa. The insistence of the prime minister to cut down interest rates is unjustifiable based on the criteria for sound economic governance, and is a clear violation of the principle of the independence of the central bank, which is a golden rule of the market economy. Furthermore, the adopted approach based on insisting on mistakes, denying reality and overusing conspiracy theories may deepen rather than solve the crisis.

The decision to launch a financial investigation to detect the operations that have led to the escape of capital — and the statements that attributed the instability in financial markets to "interest rate lobbies" whose members have been only identified as a group of bankers, economists and Western journalists — does not reassure investors. To the contrary, this will escalate the escape of capital at a historic time for the Turkish economy.

Also, whatever the reasons behind the protests in Taksim Square, the government’s dealings with protesters did not help to stabilize the situation and bring back confidence to the markets. On the contrary, the government’s approach elicited European and American criticism, most notably by German Chancellor Angela Merkel.

The world is once again watching Turkey with concern. Admiration has disappeared from the faces of Turkey’s partners, who are no longer praising the Turkish model.

Today, the Turkish model is in the eye of the storm, especially with the beginning of the decline of the wave of political Islam and the rise of interest rates globally. Turkey’s modern revival — with Erdogan as its icon — was mainly based on the sustained economic growth witnessed in Turkey and the low interest rates that were its main catalyst. Islamist organizations, like the Muslim Brotherhood, relied on this economic factor, since it is compatible with the rules of the free economy, a cornerstone of the system of modernization and globalization.

We can still remember the statement issued by the first Egyptian government following the January revolution, which was more consistent with the principles of the market economy than any other Egyptian government since Gamal Abdel Nasser. It appeared as an attempt to show its ability to rise up to the economic challenge and open up to the world. However, these positions did not develop into actions and plans, but were marred by confusion that amounted to contradiction. This ultimately led to the government’s isolation and estrangement from its support bases.

It is too early to make a final and conclusive judgement about these organizations. However, the Egyptian experience — and the June 30 movement is the best example — indicates their failure in governance, especially with regard to monopolizing power and the inability to face the economic challenges.

The recent performance of Erdogan — who appeared like the godfather of these organizations — did not dispel doubts. Addressing structural challenges should not be done by resorting to conspiracy theories and verbal escalation. Rationality and cooperation are much needed during days of hardship rather than in days of stability. The West loved Erdogan because he presented a picture of democratic Islam and an example of economic success. His recent actions did not reinforce this feeling.

The Arabs also admired the ruling experience of the Justice and Development Party. They rejoiced about Turkey’s return to its strategic depth and Islamic roots, and Erdogan’s courage in the face of Israel’s arrogance. However, they started to have doubts when Erdogan appeared to be a supporter of former Libyan President Moammar Gadhafi — who is hated by all Arabs — and a defender of Mohammed Morsi’s legitimacy against the second revolution. Erdogan also seemed incapable of achieving a breakthrough in the Syrian issue, and only resorted to verbal escalation and conspiracy theories, emulating the approach of the regimes he has long criticized and called for their toppling.