The vote of confidence by French President François Hollande is drowned out by the ouster of Egyptian President Mohammed Morsi and the rise of a Tunisian “Tamarod movement.” 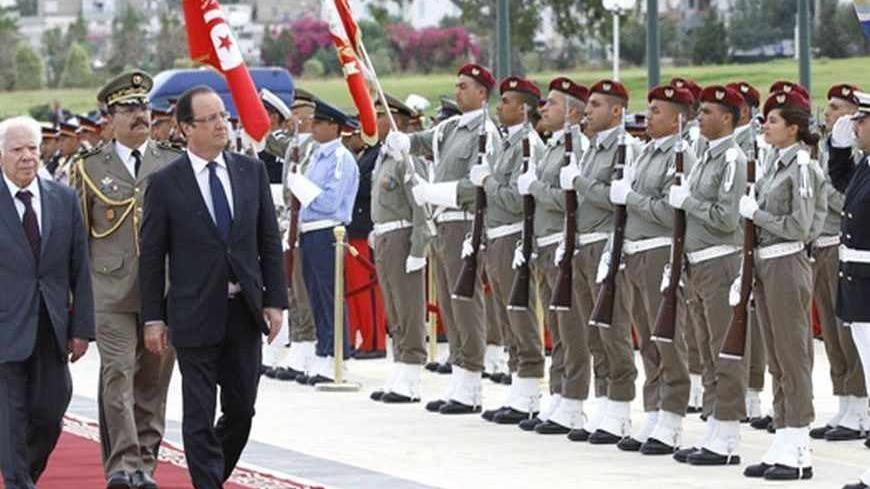 TUNIS, Tunisia —  As French President François Hollande landed in Tunisia on July 4 to begin the first visit by a French head of state since Tunisia's uprising in January 2011, the country's ruling Islamists had just become more politically isolated than at any time since coming to power.

Would Hollande — given his country's historic hostility to political Islam of all forms — change his previously friendly tone toward Tunisia's government now that its biggest regional ally, Egypt's Muslim Brotherhood, had been removed from government?

In his speech before Tunisia's parliament, Hollande put any such ideas to rest and made it clear that France still considers Tunisia to be a model for the region. Tunisia, he said, had paved the path for democracy in the Arab world.

Hollande even made positive reference to religion, saying, “France knows that Islam and democracy are compatible.” While Hollande did say “Islam” and not “Islamism,” it was nevertheless the closest thing to an endorsement of Tunisia's Ennahda party to come from any French politician.

But at the same time that Hollande was donating some international credibility to Ennahda, forces within the country were already seizing on Egypt's coup d'etat to call into question the party's mandate to rule. A movement calling itself Tamarod — after Egypt's anti-government movement of the same name — claimed to have gathered 200,000 signatures for its own petition calling for the dissolution of Tunisia's interim parliament and the holding of early elections.

While that number has not been verified and no journalists have seen the purported list of signatures, the group's call quickly found sympathy with some liberal activists. Raja Ben Slama, a professor and prominent liberal media personality, heaped praise on the group in a telephone interview on July 6.

The group's attempts to organize public gatherings have so far been unsuccessful. But if the Tunisian Tamarod movement has not seen immediate support from the street, they have received a major political partner: Tunisia's most important opposition coalition, Nidaa Tounes.

The coalition — which scores alongside Ennahda at the top of opinion polls — issued a press release on July 4 in which it made the same demands as Tamarod, the dissolution of the Constituent Assembly and new elections.

Nidaa Tounes is run by Beji Caid Essebsi, a former minister under Habib Bourguiba and a part of Zine El Abidine Ben Ali's rubber-stamp parliament. Such a brazen call for rebellion — especially coming from a member of two former regimes — was bound to draw condemnation from other political factions, even other secularist ones.

Mabrouka Mbarek, a left-leaning deputy at the Constituent Assembly from the Congress for the Republic Party, expressed her outrage at Essebsi's position.

“This is unacceptable and dangerous. For Essebsi to say this shows that he has no clue what democracy is, and is not fit to be in government,” said Mbarek in an interview in the hallway of the Constituent Assembly on July 5.

In the end, Nidaa Tounes' aggressive stance may be more likely to alienate the sort of leftist and centrist Tunisians whom Mbarek represents than it is to provoke an actual overthrow of government. Nevertheless, the protests and subsequent coup in Egypt could still push Ennahda toward reconciliation with its political rivals.

Ennahda — in contrast to the Muslim Brotherhood — rules in an alliance not with more conservative Salafist parties but with two center-left and largely secularist parties, the Congress for the Republic and Ettakatol, the Tunisian chapter of the Socialist International which also contains France's Socialist Party.

Opposition liberals have often criticized these secularist allies for working with the Islamists, accusing them of compromising their ideals to gain places in the interim government. However, following the events in Egypt, these parties have been showing new teeth.

“The Egyptian example is present in the mind of Ennahda right now,” said Mohamed Bennour, the spokesman for the Ettakatol Party in an interview at the party's annual congress on July 7. He went on to say that the events in Egypt could play a “catalyzing” role in Tunisia. “I think the people will move if Ennahda ever makes big mistakes. I think that Ennahda is conscious now of not making mistakes in the current period.”

The biggest bone of contention in Tunisian politics right now is the finalization of the country's constitution, and in particular two articles — Articles 6 and 141 — which secularists say leave the door open for a higher degree of influence of Islamic law.

Article 6 says that the state is the “protector” of “al moqadiset”  — “the holy things" — which could mean a ban on insulting any religious symbols, mosques or even imams, a much stricter blasphemy law than anything Tunisia currently has. Article 141 says that no amendments can be made to the constitution which are not in accordance with “Islam as the religion of the state,” a vague wording that some — including the Ettakatol Party — think could imply that Sharia should be the basis for future constitutional changes.

“Article 141 refers the origin of the law to the Quran and Sharia, and that is very dangerous because it can be interpreted by certain judges as being the law, Sharia as law,” said Bennour.

However, Bennour and others within the socialist Ettakatol Party felt that Ennahda would cede on these controversial points in light of recent events.

“The Egyptian experience will help us a lot. It is currently validating our political option to make this government, which has allowed our country to avoid the difficulties of Egypt. And it will push the Islamists to say, 'Watch out, let's compromise, there's too much risk.'” said Khalil Ezzaouia, Tunisia's minister of social affairs and another member of Ettakatol, at the party's congress on July 7.

Ennahda still has strong support, and it has mobilized its base on July 7 to send a message of solidarity with the Muslim Brotherhood.

On July 7, a crowd of around 200 Ennahda supporters shouted slogans for the end of military rule in Egypt. But even those partisans of Islamist “legitimacy” —  a key word invoked by Ennahda and the Brotherhood alike — were willing to admit that it was in everyone's interest to bring Tunisia's transitional period to an end and move toward a stable government.

“There has to be an end soon, it's necessary. Even the government admits that. It won't continue forever, it's not logical,” said Zoubeir Boubaker, a functionary in the Ministry of Finance who came to the demonstration to support the Ennahda party and the Brotherhood's right to rule in Egypt.

While the rest of Tunisia prepares to slow down with the reduced hours of the holy month of Ramadan [due to start on July 9], the Constituent Assembly has announced it will continue to work, with a session in the morning and another after the breaking of fast at night.

Perhaps the dire example of Egypt will push Tunisia's parliament to put aside differences and advance their country to the next phase of democracy.