Two Futures for Egypt Clash In the Conflict of the Squares

The war of the squares, or the mass rallies organized by Egypt's opposition and the Islamists, show each ideology trying to flex its muscles by mobilizing the street. 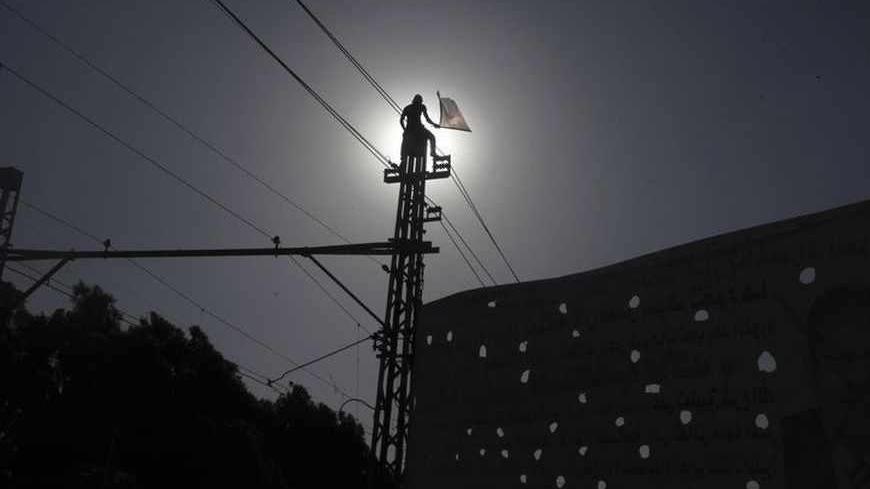 A protester opposing Egyptian President Mohammed Morsi stands atop an electric tram column as he waves an Egyptian flag during a protest in front of El-Thadiya presidential palace in Cairo, June 30, 2013. - REUTERS/Amr Abdallah Dalsh

The Tamarod movement in Egypt came to fill a vacuum created by the absence of strong, well-entrenched, mass-based political parties. This is expected, since Egypt is emerging from six decades of authoritarianism that closed down the political space and confiscated political life. It also obstructed the creation and evolution of party politics.

Another factor for the emergence of Tamarod lies in the shaky legitimacy of the salvation front. It is a loose coalition of important personalities and of mostly small, newly created, elitist political parties. Beyond their common unified opposition to the newly established Muslim Brotherhood regime, they have different ideological sensibilities, political views and governing agendas ranging from liberal to nationalist to socialist to a combination of some of these ideologies. The asymmetry is due to the enormous resources and the iron discipline of the Muslim Brotherhood.

This is cemented by years of persecution and yearning for power and by the strong belief of being entrusted with the sacral mission to salvage the Umma. The Muslim Brotherhood is acting as if they earned via the ballots a piece of property called the state, which they could rebuild and redecorate the way they wanted.

Tamarod, the youth movement, whereby youth represents a majority in Egypt, reflects the frustrated expectations of those who played a major role in bringing down the authoritarian regime of former President Hosni Mubarak. They wanted to establish an open, democratic, new regime, one that is established by all and for all. A regime that is based on political participation, accountability of the institutions, respect for rights and freedoms, separation of powers and drastic, concrete socioeconomic reforms introduced by the new state.

For them, a democratic regime is to be built by an inclusive equal-sharing societal process in which all the actors of the society are involved. For the Muslim Brotherhood, democracy was reduced to elections that gave the winner a free hand to enforce its ideological views and precepts, gradually if necessary, to reshape state and society. Thus, according to this view, democracy is no more than an electoral procedure, a parenthesis in the historical process to grab power. It bestows on the Muslim Brotherhood the right to build their own regime under a different name and a different legitimizing discourse. This is part of the well-known Islamist strategy of empowerment and redefining the sociocultural identity and remodeling the existent value system of the country, instead of redefining the role of the state to better face the socioeconomic challenges of an impoverished developing country.

The Muslim Brotherhood answer to the Tamarod movement call for change has been to depict the conflict as between Islam and secularism as the deputy supreme guide [Rashad al-Bayoumi] has been saying. Secularism is a word that represents an accusation in a religious conservative Egypt, being equated with atheism. They try also to define the conflict as being between the old regime people and the revolution.

If a win by knockout by either party is impossible, then to save Egypt from a deadly stalemate, with an unpredictable outcome, the regime must accept to change its policy entirely. The aim would be of building genuine bridges with the opposition. It must adopt an inclusive approach to national reconstruction that cuts entirely with the authoritarian mentality of the Muslim Brotherhood; the same mentality that governed Egypt under the old regime and that is changing its name this time. Otherwise the confrontation of the squares will continue to escalate and expand with the risk of becoming more violent. This will take Egypt to a dangerous, tortuous road leading to more economic impoverishment, a radicalization of the political discourse and more social violence in an atmosphere of tense escalated national tension, of state paralysis and of trading accusations.

If the 25th of January will go down in history as the day of radical removal of the old regime, the 30th of June is the day that witnessed the launching of establishing a democratic regime on the ashes of the old one. A not-so-easy task to do but the only way for Egypt to surely take the road of national reconciliation and comprehensive development.

Regardless of how things evolve in Egypt, three lessons emerge:

• First, the policies of exclusion, irrespective of the ideology they invoke and the strategy they adopt, cannot impose themselves peacefully in countries that went through regime change in the Arab world.

• Second, Islamism in power from day one was unable to intimidate even Muslim conservative constituencies in Arab societies from being vocally critical of its leaders, its slogans and its policies, even at the height of the Islamist moment in the Arab world.

• Third, how the Islamism in power in Egypt today will manage the situation and how it will emerge from the crisis will have important effects on Islamism and its foes elsewhere in the Arab world. We have already witnessed the creation of a Tamarod movement in Tunisia, a good example of an emulation process. This is due to the centrality of Egypt in the Arab world and to its being the birthplace of the Muslim Brotherhood movement and its launching pad.