If Turkish Prime Minister Recep Tayyip Erdogan can achieve a peace deal with the Kurds, he will have earned a place for himself in the history books. 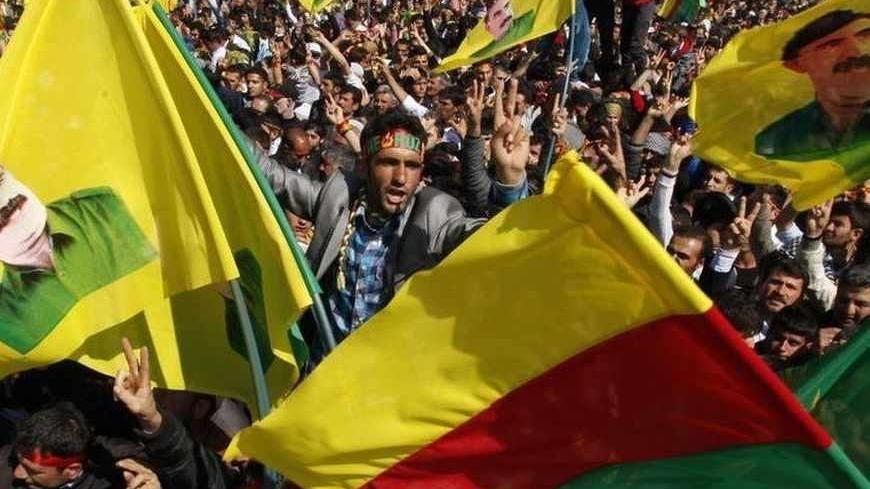 Ever since the Gezi Park demonstrations and the coup in Egypt that toppled his allies in the Muslim Brotherhood, Prime Minister Recep Tayyip Erdogan has been laboring under a siege mentality which is forcing him to see domestic and foreign enemies all around. His international reputation has plummeted as a result. History, however, has provided him with a unique opportunity to redeem himself both in Turkey and the region in the shape of the Kurds.

This, however, is contingent on his ability to solve Turkey’s age-old Kurdish problem through the current peace process his government has initiated with the Kurdistan Workers Party (PKK), an armed group formed to seek autonomy for Turkey’s Kurds. It is also contingent on his ability to establish not just amicable, but also mutually beneficial ties with the Kurds across the border.

If Erdogan can achieve this — and it is achievable — he will have carved a well-merited place for himself in the history books. Solving this problem by democratic means and with respect for human rights will also enable Erdogan to spring back as a promoter of genuine, and not majoritarian, democracy in the Middle East. If not, however, Turkey’s Kurdish problem will continue to fester and remain a ball and chain on the country’s prospects of ever joining the ranks of the world’s advanced democracies.

One of Ankara’s most elemental fears for decades has been the emergence of an independent Kurdistan on its borders. It was feared that an independent Kurdistan would spur its own restive Kurdish population by tempting it to vie for separation from Turkey. Years of oppression against its own Kurds, and the demonization of Kurds in neighboring countries, however, has been unable to halt the march of events.

Today, an independent Kurdistan exists in Northern Iraq in all but name, and has developed mutually beneficial ties with Turkey, especially in the strategic energy sector. Recent developments in northern Syria, which indicate that the Kurdish sphere of influence is set to expand, however, have Ankara worried.

Foreign Minister Ahmet Davutoglu has vowed that Turkey will not allow a “de facto” situation to arise in the region. What he means, of course, is Syria going the way of Northern Iraq. But is it such a bad thing for Turkey to have either a unified Kurdish entity on its eastern borders, or separate but related Kurdish entities that span two countries?

The answer to the first question has already been given. Northern Iraq is not only an independent region but is proving to be a source of stability on Turkey’s borders, given the turbulence in the Middle East which is clearly set to continue for some time. It is also proving to be a fruitful partner in terms of economic cooperation valued at billions of dollars.

Looking at the success of ties with Erbil, the seat of the Kurdistan Regional Government (KRG) in Iraq, one cannot help wonder why wisdom did not prevail earlier, enabling this success to be attained nearly two decades ago, instead of the acrimonious verbal sparring that went on during that period.

Of course, there is the PKK, which has been based in Northern Iraq for years, posing a sore point for ties between Ankara and Erbil. But, as the Iraqi Kurds — including other sober voices in and outside Turkey — have pointed out for years, the causes of the PKK problem have always been more inside Turkey than outside it.

This fact was finally recognized by the Turkish state and Erdogan’s ruling Justice and Development Party (AKP), which initiated a series of bold cultural reforms aimed at increasing Kurdish rights and reducing ethnic tensions in Turkey. The culmination of this process is the current peace process with the PKK.

Yasar Yakis, a founding member of the AKP and its first foreign minister who is currently with St. Antony’s College at Oxford, believes that the model of good and mutually beneficial relations with Northern Iraq should be replicated in northern Syria.

In an interview with the daily Taraf, Yakis recalled how he had spoken out for good ties with Northern Iraq nearly 20 years ago, even if the region became an independent Kurdish state, the ultimate fear of nationalist Turks at the time. “Now I say the same thing for the north of Syria,” he said, adding that Turkey should get on well with the Syrian Kurds.

Having overcome its initial knee-jerk reaction to recent developments in northern Syria, it seems the Erdogan government may be following Yakis’ advice after all. Saleh Muslim Mohammed, the head of the Kurdish Democratic Union Party (PYD) — which has organic ties to the PKK — paid an unexpected visit to Istanbul on July 25 for talks with Turkish officials on developments in Syria.

Initial press reports in the pro-government media suggested that the Istanbul-educated Muslim, who is also a fluent Turkish speaker, had been “summoned” for talks with officials from Turkey’s intelligence agency, MIT, and the aim was to give him a warning in line with Davutoglu’s avowal to prevent “de facto” developments in northern Syria by the Kurds.

The results of the meeting, however, point to a very different story. The main surprise was the revelation that Muslim was not invited by MIT, but by the Turkish Foreign Ministry for consultations, which in effect has elevated his status as far as Ankara is concerned. Muslim declared later that the Istanbul talks had gone well and done away with some of Ankara's misunderstandings.

“The Turks didn’t object when I explained to them our project. They understood our position. They had misunderstood [what we said] and thought that a de facto government and autonomous region [has been established]. But I explained to them that it is a transitional civilian administration for western Kurdistan, which includes Arabs, Kurds and Christians,” Muslim said according to a translation of his interview in Al-Monitor.

He added that Turkey’s approach to the Kurdish issue was fundamentally different today when compared to the past. “Turkey is trying to resolve the problem between the [Turkish] Kurds and the Turkish state. This is affecting other Kurds. So Turkey wants to establish good relations with all the Kurds,” Muslim said.

Muslim's remarks come in the wake of last week’s meeting in Erbil of 39 Kurdish political groups, including the Peace and Democracy Party (BDP) from Turkey. The meeting held preliminary talks on convening a National Conference of the Kurds, even the suggestion of which would have sounded alarm bells in Ankara only a few years ago.

It was telling that KRG Prime Minister Nechirvan Barzani should have arrived in Ankara on July 30 for two days of talks during which he will also meet Erdogan and Davutoglu. With a dialogue initiated between Ankara and the PYD, a looming Kurdish national conference, and the visit by Barzani at such a critical time, there is obviously more to Turkish-Kurdish ties than meets the eye.

What will clinch the whole deal however will be the successful conclusion of Turkey’s own peace process with the PKK, which is not a done deal yet by far, despite some promising signs. Clearly it is not possible to end a war of attrition of nearly 30 years overnight, but much hinges on the success of this process.

If Erdogan can achieve this, he will not only alter the negative image that has stuck to him of late, but also be remembered as a peacemaker, rather than an Islamist rabble-rouser who is more interested in using his democratic mandate to promote his ideological world view at the expense of others.