A new study reports that Israeli demolitions of Palestinian houses in east Jerusalem are having a detrimental effect on the mental health of children who have lost their homes. 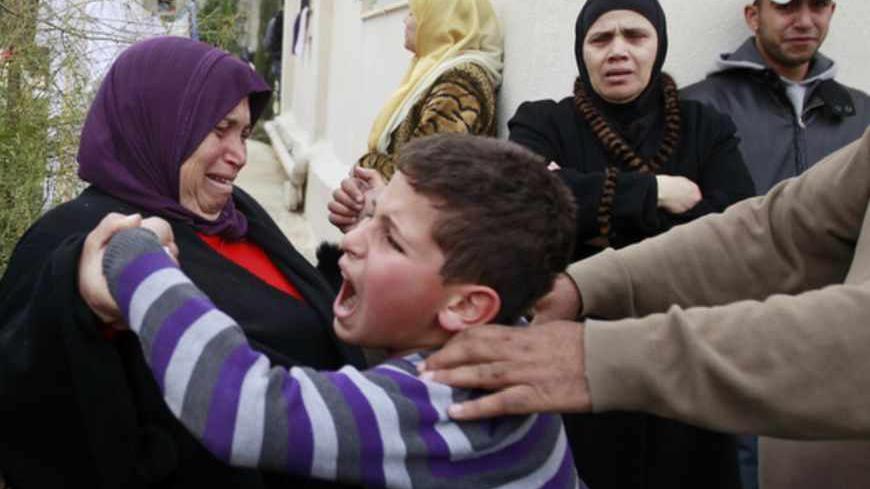 A Palestinian boy cries during the demolition of his house in the east Jerusalem neighbourhood of Beit Hanina, Feb. 5, 2013. - REUTERS/Ammar Awad
Miriam Pellicano
@@DCIPalestine
June 10, 2013

The 28 members of the extended Castiro family watched as Israeli forces demolished their home, in the Beit Hanina neighborhood of east Jerusalem, earlier this year. The defiant, angry Imran who yelled, screamed and cried at the scene of the demolition now feels as if his life has been drained out of him.

He recalls soldiers just laughing at him as he tried to get past them to go to his house. He remembers three soldiers blocking and mocking him. This memory sits heavily with him.

Despite this, nearly 200,000 Israeli settlers currently reside in continually expanding Jewish-only settlements located throughout east Jerusalem. Last month, Minister for Housing and Construction Uri Ariel, a member of the far-right Jewish Home party, announced approval for 300 settler units to be built in the Ramot area of east Jerusalem. Another 797 plots will be offered for sale in Gilo, a Jewish settlement near Bethlehem.

According to the Israeli Committee Against House Demolitions (ICAHD) for Palestinians, obtaining permits to build on their privately-owned land is nearly impossible as 94% of building-permit requests submitted by Palestinians are denied by Israeli authorities.

As Jewish settlements grow to accommodate an increasing settler population, Palestinian homes are being demolished even though the Palestinian population has quadrupled since 1967. From January to April 2013, the United Nations Relief and Works Agency reports that 90 people have been displaced from their homes in east Jerusalem, including 49 children. Another 183 people, including 89 children, have reportedly been affected by a house demolition.

Child victims of house demolitions are displaying alarming symptoms of anxiety and depression, and are increasingly being diagnosed with post-traumatic stress disorder.

A study released by Save the Children-UK, the Palestinian Counseling Center and the Welfare Association states that “Children who have had their home demolished fare significantly worse on a range of mental-health indicators, including withdrawal, somatic complaints, depression/anxiety, social difficulties, higher rates of delusional, obsessive, compulsive and psychotic thoughts, attention difficulties, delinquency and violent behavior.”

Imran feels that he is not good at school anymore, and because of this, he doesn’t like any of the subjects he has to study. His mother, Ghada, can see a big difference in him.

“He used to be smart and obedient,” she says. “Now he refuses to do his homework. He gets angry fast and he doesn’t listen.”

Most striking, Imran describes himself as not having any joy. When he leaves the room, his mother emphasizes this point.

Children become acutely aware of how they are perceived differently by their friends and peers at school after a home demolition. The children feel that they stand out and that people look at them with pity, which makes them feel like outsiders.

“One friend used to come here to play,” says Dana Castiro, 10. “She notices that the situation has changed and now she doesn’t visit here. I don’t visit my friend. I don’t want to play anymore.”

United Nations agencies offer support to families whose homes are demolished. Part of this aid package involves efforts to supply the children with resources in order to minimize disruptions to their education.

The Castiro children display the notebooks, pencil cases and backpacks that UN agencies have supplied. The agency branding is splashed all over the items, indicating clearly that the children are recipients of humanitarian aid.

“The UN helps the poor, victims, people whose lives have been destroyed,” says Imran. “We don’t want to be identified as such.”

There can be wide variation in the time taken to enact a demolition order. Overwhelmingly, families are given little if any time to lodge an appeal with the courts once an order has been issued. However, time can vary from 24 hours to months to a couple of years, leaving families in states of limbo.

“The child, on his way to school, is not sure that he will come back and find his house is still there,” says Anan Srour, clinical and educational psychologist at the Palestinian Counseling Center. "They don't know the date they will lose their home, so they are in a constant state of stress. It has implications on all of their daily functions, and parents don't have the psychological energy to meet their children's demands."

Zakaria Castiro, 13, admits that since the demolition he has had a lot of difficulty concentrating and his grades at school have suffered. The nuclear family of nine live in a two-room caravan, where the largest room, four meters (13 feet) by five meters (16 feet), serves as the lounge, dining room, study area and bedroom for the seven children.

“You cannot focus here,” says Zakaria. “There is no studying atmosphere and there are too many distractions.”

Currently, the extended Castiro family is living in three separate caravans on the edge of their demolished house, recently erected after they spent two months living in tents.

They are struggling to wage two legal battles: one to acknowledge their land rights and the second to stop the demolition orders that have been issued on their caravans.

Miriam Pellicano is a program manager at the University of Sydney, Australia, working to increase access to education for marginalized communities. She is currently a consultant  with the Accountability Program at Defense for Children International Palestine, an independent child-rights organization dedicated to defending and promoting the rights of children living in the occupied Palestinian territories. On Facebook: https://www.facebook.com/DCIPS and Twitter: @DCIPalestine