Female activists in Gaza have turned to social media to air their thoughts, but on-the-ground activism is still constrained by a largely male-dominated society. 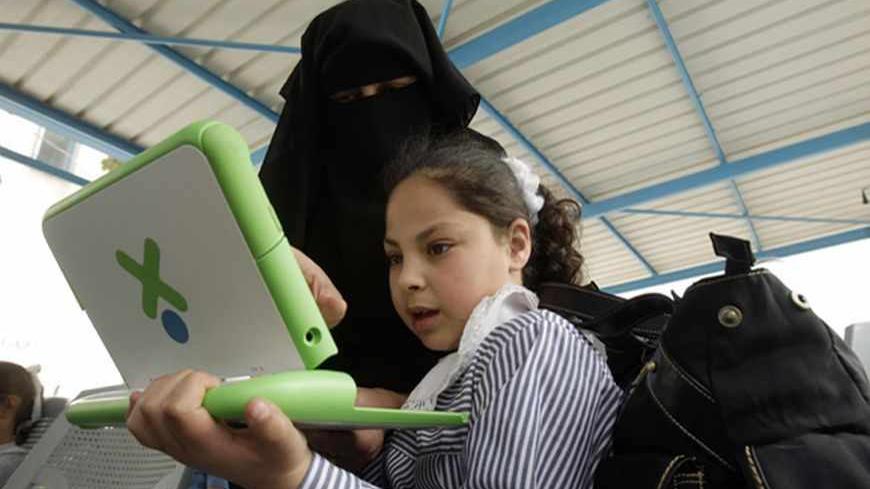 A teacher shows a Palestinian schoolgirl how to use a new laptop at a United Nations school in Rafah refugee camp in the southern Gaza Strip, April 29, 2010. - REUTERS/Ibraheem Abu Mustafa

Sitting in an armchair with her feet tugged up under her and a laptop in front of her, blogger Malaka Mohammed typed 140 characters and clicked "tweet." She scrolled through the most recent tweets, then went to her blog where she reviewed a post she is working on before moving on to her Facebook page, checking recent comments from her more than 5,000 followers. The 22-year-old recent English literature graduate is one of Gaza’s most prominent online activists.

"I started with Facebook, because there is no house here without Facebook. Then, a teacher told me I should start a blog because I’m a good writer. I now have thousands of readers,” Mohammed told Al-Monitor at her home in Al-Shejaia in Gaza. "Whenever I write, reply or share I always think of the result and effect. The Palestinian issue is important. When you write something as a Palestinian, the entire world will think of you as representing Palestinian women.”

And the influence of her writing is not to be overlooked. She single-handedly convinced the Islamic University of Gaza to boycott Israeli goods. And after she decided to put world attention to the case of former hunger striking Palestinian prisoner Samer Issawi earlier this year, her online campaign "#freeSamerIssawi" trended on Twitter for days and reached international news outlets such as CNN and BBC.

Heba Zayyan, Head of UN Women in Gaza, sees Palestinian women in the besieged territory as very active when it comes to voicing their opinions online.

“Women, and especially youth, are very capable of expressing themselves about everything that is happening around them and how it affects their lives and families,” she told Al-Monitor at her office in Gaza City, adding that so far there seems to be a large degree of tolerance for online activism from the side of the authorities.

“I see young women criticizing the — de facto Hamas-led — government and the Palestinian Authority very strongly and it doesn’t seem that they feel there’s any kind of censorship on social media. But when it comes to real activism — real engagement in the community — of course there are limitations. Some are related to traditions and gender norms, some to poverty and some to political concerns and fear of being harassed by the officials,” said Zayyan.

Though the Internet has provided a platform for Gaza’s women to amplify their voices, female politician Najah M. Elaiwa told Al-Monitor that they “do not live in a fairy tale” of freedom and women are to a high degree suppressed.

"Only a very small group of women can go onto the streets and demonstrate — women are used to confrontations, to being beaten up and arrested and the next day they will go out again,” she said, adding that in a male-dominated society such as Gaza’s, it puts shame on the whole family if a young woman is harassed by the authorities, which is why the family will try and prevent her from going out.

Speaking from her own experience as both director of the Blood Lab at the Palestinian Ministry of Health and head of the Fatah Women’s Committee in Gaza, Elaiwa said that the limitations women face are not only in the street, but also in trying to reach influential positions.

"Freedom of speech will be given to a woman as long as she doesn’t hold any position and doesn’t make decisions. As soon as I got a political position within my party the men started to fight me and say ‘It doesn’t matter when it comes from a woman,’” she said.

According to Zayyan, a major obstacle for female empowerment and especially women activists remains the unstable economic and military situation, which has only grown from bad to worse over the past decade.

“If we want women to pursue their freedom of expression we need them to be empowered economically to have financial stability so they can ask for other rights,” she said.

A recent report by UN women on the state of women’s economic security and rights concludes that due to the “overwhelming effects of prolonged siege and military violence, as well as the ongoing comprehensive blockade, humanitarian interventions have not been able to keep women and their households in Gaza out of poverty.” But the report also points to a change in Gaza’s Palestinian society where especially mothers push for their daughters to get an education. The economic and military crises of the past decade have led to a growing number of men losing employment, prompting women to seek ways to bridge the gap in the loss of household income.

“The disastrous situation women are living in has forced them to look for alternative means of survival. It has made them stronger and enabled them to face anything,” Reem Freinah, director of Aisha Association for Woman and Child Protection told Al-Monitor at her office in Gaza City: “Now women have to get an education and a job to help her husband due to the bad economic situation.”

According to Freinah these changes could lead to more empowered women even if the economic situation got better. But though the number of women who pursue a higher education has doubled in the past decade, unemployment among women in Gaza reached 44% in 2011.

Still, Freinah fears the situation of women’s rights and freedom will deteriorate. She points to recent incidents of authorities asking men and women who walk together in the streets to show documentation of their relationship and a new draft law which suggests instating Islamic Sharia law on punishments of theft and adultery.

”The effect of the government in Gaza on women’s rights movements has not been clear previously but now the government is in a stable condition where it can actually enforce these restrictions and it will be more obvious how they will limit women’s freedoms in Gaza,” she said.

The young blogger Mohammed said that her father, teachers and neighbors have encouraged her to pursue a masters or even a PhD in political science. She said that the only obstacle she has faced is that her family thinks she spends too much time in front of her computer.