Is This the Beginning Of Erdogan Era's End?

Some of the traits that made Turkish Prime Minister Recep Tayyip Erdogan a success are now emerging as liabilities. 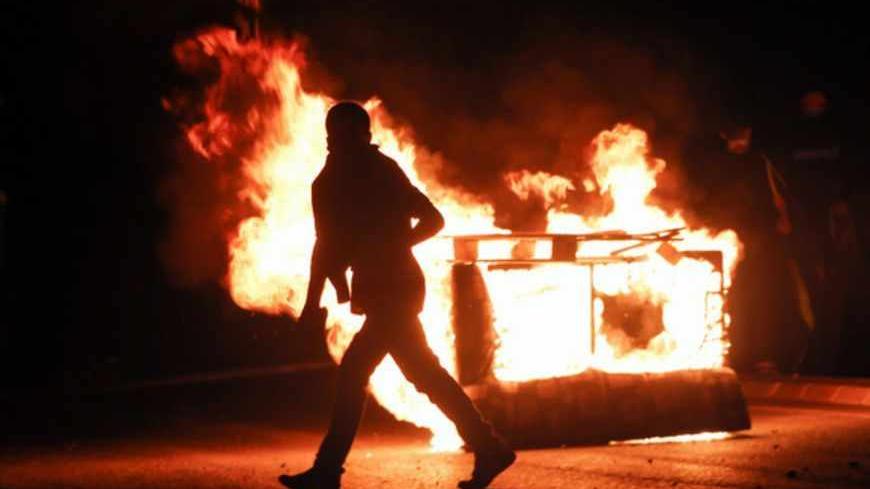 A protester runs by a burning barricade during clashes with riot police in Istanbul's Gazi neighborhood, June 8, 2013. - REUTERS/Yannis Behrakis

On Sunday, June 9, Prime Minister Recep Tayyip Erdogan delivered five speeches in three different provinces. His first speech was at Adana and Mersin in the south. Following his return to Ankara he delivered three more speeches to cheering crowds out to welcome him, starting from the airport.

While everyone was expecting him to tone down the more he spoke, he actually hardened his language. In his last speech to the crowd in front of a shopping mall in Ankara he openly challenged the protesters: "If you continue in the same vein, excuse me, but I will have to talk to you in the language you understand. Patience has its limits. You can’t show this country to the entire world as a country where terror reigns.”

Information leaking out from a meeting of the central executive council of the Justice and Development Party (AKP) on Saturday in Istanbul clearly enunciated how Erdogan perceives all that has been happening. We know that in the meeting Erdogan underlined three points as causes of events. According to the prime minister, the causes of the street protests and clashes that have shaken Turkey for two weeks are:

Even those who have the most superficial knowledge about Turkey’s political life will easily recognize that Erdogan’s approach to analysis of the events is a classical state formulation. The military who ruled Turkey for many years also used to explain all demands for identity and social tensions as machinations of Turkey’s internal and external enemies. Today we see that Erdogan is using precisely the same language of the military regime that he defeated.

Although nobody is debating Erdogan’s democratic legitimacy, there must be several reasons why he is trying to respond to protests by calling for mass meetings of his supporters. Erdogan, who is the prime target of the protests, is most likely trying to show to his party and his potential rivals that he is an indispensable figure for the AKP. That is Erdogan’s way of intimidating anyone who may think of ending the crisis by sacrificing him.

His mass meetings will peak with two major ones planned for Ankara and Istanbul on June 15-16.

Anyone who follows Erdogan’s political career will admit that his responses to the crisis Turkey is undergoing currently are not fully based on rational political calculations.

Erdogan is trying to cope with the crisis by precisely repeating his attitudes, actions and narratives of the past without recognizing that a totally different set of conditions now prevail in the country.

In the past, Erdogan overcame all political crises by outright confrontation. Even when his party risked closure, or he was openly or discreetly threatened by the military, he never backed down. With that attitude, he wore out the military tutelage and won the admiration of the masses. Erdogan, who perceives the demonstrations and protests against him as preparing for a coup, is doing exactly what he did before, probably thinking that is his best defense. His frequent references to Adnan Menderes, who was hanged after the 1960 military coup, and calling it “an assault against national will” are but some visible clues of how he sees the events as a plot against himself.

As he did when the military challenged him and his government, today too Erdogan is drawing masses to city squares and talking of the ballot box. It is true that these crowds he mobilizes and his reversion to the ballot box whenever the legitimacy of his government is challenged has rescued him from past crises. But this time his emphasis on "national will" and elections is working against him because Erdogan is refusing to understand the basic grievance against him. With the exception of some Kemalist and militarist groups participating in the protests, nobody is challenging Erdogan’s legitimacy as a leader elected through democratic elections. The real tension arises from Erdogan’s conviction that the votes that brought him to power give him unlimited power to interfere in all aspects of life. While the protesters who occupied the Gezi Park and became the driving force behind nationwide demonstrations voice their irritation about Erdogan’s and his government’s limitless application of power, Erdogan is pointing to the ballot box to prove his strength.

Erdogan and some actors in his close circles don’t want to see that Erdogan’s imposition of conservatism and his style are the main causes driving the protests. For example, nightly clashes between the police and protesters at Istanbul’s Gazi neighborhood illustrate how removed the government is from comprehending what is happening. Residents of the Gazi neighborhood, where every night about 15,000 protesters fill the streets, are predominantly Alevis. A brief glance at the remarks of Gazi protesters to Ezgi Basaran of Radikal easily reveal the real cause of their anger. Giving the name of the Ottoman sultan who in Alevi narrative is said to have massacred Alevis to a new bridge across the Bosphorus has played a major role in the protests at Gazi. One protester summarized their common sentiment: “To name the bridge Yavuz Selim has wounded our essence.”

Unfortunately Erdogan, instead of trying to comprehend the tensions caused by conservative pressures, is reverting to narratives that further increase tensions. For example, in Istanbul he complained of the protesters who ran away from the riot police and took refugee in Dolmabahce Mosque of Istanbul and transformed it to a first-aid station. “They drank beer in the mosque,’’ he told his supporters.

Erdogan, just like he did when struggling against the military and secular elites looking down, on him is reverting to polarization. In the past, such polarization had garnered him a substantial voter block. But this time he is risking a very dangerous adventure in which masses are furious with each other.

In short, the prime minister doesn’t want to see that everything that made him powerful in the past is now working against him and that the society is dragged into dangerous tensions.

Although he is seen to be in total control of the AKP, it won’t be surprising if complaints are raised from inside of his party because of these aggavating policies.

Time will show how Erdogan’s political career will be affected by this crisis.