Asa7be started its crusade with a series addressing sexual harassment and has since become a prevalent source of release and laughter in post-revolutionary Egypt. 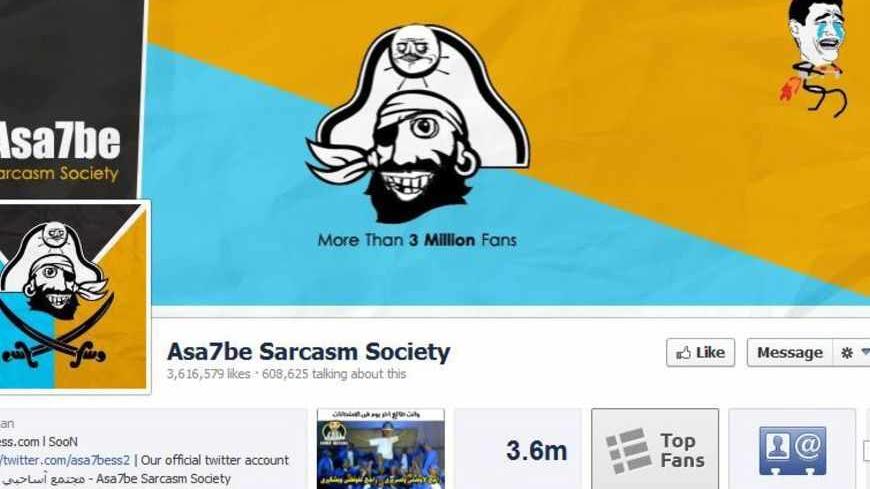 While Tahrir Square has resumed near-normal functionality for the moment, with traffic circulating, a few remaining vendors are ever ready with Egyptian flags, T-shirts with revolutionary slogans and face paint for the occasional passing tourist or the next outbreak of protest.

One of the most famous characters emblazoned on T-shirts is the face of Chinese basketball player Yao Ming, who retired from playing for the Houston Rockets in 2011, which seems like a strange choice. His face is crinkled in slightly pained laughter, and many Egyptians recognize him from the popular Asa7be comic strips on the internet.

“Yao Ming … is funny and his face is smiling. He makes you smile without even reading the post and he’s very famous in China. He pushes you to think in many directions at the same time,” said Shady Sedky, who co-founded Asa7be in 2012 with friend Ahmed Mido, in an interview with Al-Monitor on May 31. The character choice reflects Asa7be’s commitment to finding something that all Egyptians can laugh about together regardless of the never-ending political disagreements.

Asa7be, which means “friend” in Arabic, plays on the language by using the soft “seen س” instead of the hard “suad ص” of the correct spelling. The deliberate misspelling reflects the speech of many less-educated Egyptians, or the “microbus class,” who do not make the harder constant sounds in the Arabic language. The comics, who go by “Asa7be Sarcasm Society” online, use the characters Achef and Idara as a window into the thoughts and lives of this strata of society, as well as generally commenting on Egyptian society and politics.

After the revolution, the community of artists tackling Egypt’s political and social struggles has burgeoned. Although the opened political space is increasingly under attack as the government investigates people for insulting the president or Islam, comedic commentary is growing. It is one of the few forms of expression that can make people chuckle even while being censorious. The snarky commentary on the country’s overall decline as Egypt faces economic and political instability resonates with the struggling population.

Critics of Asa7be accuse the comics of destroying the language by adopting the colloquial language in their writing as opposed to using Modern Standard Arabic. Sedky countered this by saying, “The idea came from wanting to express people’s opinion from the street, and we aim to reach the youth through comedy. We have a message and we’re not laughing at the people on the microbus, but we want to express their opinion and what they think around the world. They are the majority of the people in Egypt, so we should express their opinion.”

For Sedky, “Democracy is to criticize freely — to have the freedom of expression, to express your opinion in whatever way you want. Before the revolution we didn’t have this freedom of expression, but we have a sense of humor as a people, so now we can’t go back to the way things were before and stop criticizing each other.”

Part of Asa7be’s appeal is the perception of the founders’ neutrality. It is not easy for readers to decipher any sort of political leaning because every side is subject to criticism.

“None of the parties — the opposition and the Muslim Brotherhood — like our comics. Being neutral, we speak positives and negatives about everyone. In my opinion, this is how to be neutral — talk about everything. We laugh at Hamdeen Sabahi and Mohamed ElBaradei and everyone, but because the president is the main character, we laugh at him more.”

“For example, if you have an accident, who is to blame? The driver — not the people riding in the car. That’s why we should criticize the president more than others.”

While the group pokes fun, it seeks to create political and social awareness in youth who are disenchanted with Egypt’s tumultuous transition period, especially with plummeting economic conditions due to the lack of tourism and foreign investment. According to the Central Agency for Public Mobilization and Statistics, more than 24% of Egypt’s population of 24 million is between the age of 18 and 29, and 51% of them are estimated to live in poverty. The youth unemployment rate is almost 25%.

As the government seeks financial assistance from foreign governments, Qatar being the most generous of them, the population is losing hope in Egypt’s ability to solve the economic crises. The government has been in talks with the International Monetary Fund over a loan package since last year without any final agreement.

“We are waiting for President [Mohammed] Morsi to do something very positive for the country, but it hasn’t happened, so we will do it ourselves,” said Sedky.  “I want Asa7be to have an impact and affect the country. The goal is to have not just one opposition but millions of people resisting. In general, the benefit from resistance is a good thing.”

The group took an open approach to the campaign, as it does with all of its comics, and incorporated people’s comments, suggestions and contributions in order to facilitate a creative space. The main character, “Asa7be Man,” is dressed as Superman, and the campaign adopted the slogan of the wider anti-harassment movement, “Be a man and protect her instead of harassing her.”

Even though the group faced resistance from some viewers who said it was shameful to talk about sexual harassment for such a prolonged campaign, the group insisted on the importance of the issue.

“I believe that harassment and stealing are very close to each other, but with stealing maybe you’ll benefit because you have something, but with harassment you steal something but don’t benefit. I want to tell people that it’s dangerous behavior,” said Sedky.

Due to the engaged relationship that the Asa7be creators maintain with their audience via Facebook, they are constantly receiving positive and critical feedback. Asa7be faced complaints about its use of insulting words at the onset of the comics. Now, the 30 Asa7be staff members and founders are careful to respect society’s boundary between sarcasm and insults. They are particularly conscience of society’s differing standards for language boundaries according to gender.

While raunchy language may be permissible for men, if not expected, the same does not apply to women, who are often judged negatively for a coarse sense of humor and made uncomfortable by it. “Girls and women in our families were upset and embarrassed when they saw our post and that’s why we changed the kind of language we used. We did not want to upset them, or to upset girls from other families. We respected the reaction of others and respected their feedback, and stopped using these words.” As Egyptian women are working to firmly establish their equal standing in society, pushing social conventions is among the most difficult issues to navigate as they relate deeply to personal values. For Asa7be, cutting down the coarse language resulted in increased female commentary and engagement with the comics.

Perhaps its connection with its audience has earned Asa7be such a loyal following. Its Facebook page has more than 3 million fans, and reaches 35% of all Egyptian Facebook users weekly. There are numerous imitation Asa7be pages on Facebook, but Sedky says that this is just a sign of the comics’ success. The comics’ creators are currently working through the details of expanding the Asa7be comics to a show on YouTube.

The momentum of Asa7be tells of a vocal Egypt. While still navigating the social boundaries of free speech and pushing back against government resistance to criticism, it is willing to laugh at itself in moments of despair and frustration while demanding more from its politicians.

Abeer Heider is a professor of Arabic at the American University of Cairo.