The US Department of State's annual human rights report refers to the limitations on freedom of the press in Turkey, writes Yavuz Baydar. 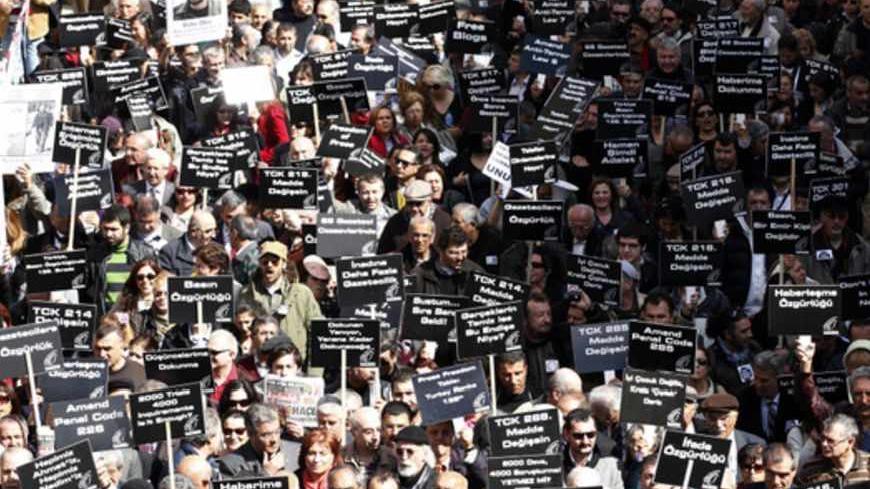 World Press Freedom Day, as always on May 3, gives journalists worldwide an occasion to celebrate their professional honor, but also an opportunity to lament the erosion the media suffers in both independence and freedom as much as the physical, punitive and economic threats that a clear majority of them have to operate under.

This year’s slogan, promoted by the United Nations, "Safe to Speak: Securing Freedom of Expression in All Media," is a fitting one, covering most of issues of concern.

And whenever press freedom is put in a broad context, such as May 3, the global spotlight quickly turns to Turkey and its tormented media sector and professionals.

The reasons are many. Turkish society has been undergoing a remarkable transformation for over a decade. Various segments of its diverse and long-suppressed society push continuously for a democratic transition. As a result, an arduous process to end the bloody Kurdish conflict is on display, and the greatest challenge is whether or not the transition can be completed with a modern, democratic constitution.

At the same time, Turkey is negotiating — against all odds — for full membership in the EU. It is a member of NATO, as well as more than 30 Western institutions. Much of its economic and intellectual elite keeps boosting efforts for an open, civil society, embracing the values of pluralism, diversity and reconciliation within.

The "Turkish experiment" toward completion of "normalization" also sets some standards for the changes that are taking place in the Middle East and North Africa and — despite claims to the contrary — stands as a source for inspiration.

Focus on such an important player in this context is actually a focus on its increasingly troubled media. The reason is simple: Without a free and independent media, any transition is doomed, at best risking derailment from the path.

In a broader context, Turkey’s media has all the other ingredients that legitimize that focus, depicting it as a mixed bag of global problems.

It has a large and pluralist sector, with a geometrically expanding digital domain. Annual ad revenues total between $4 billion and $4.5 billion — with print losing big territory to the online domain.

Its media has been engaged in a fierce debate on all major issues, carving up a milieu of glasnost, and has broken most of the taboos. Every day it has been facing a pile of legal and political challenges.

Yet, Turkey has been lately remembered as the "top jailer of journalists" in the world.

The truth of the matter is that while it is the Kurdish journalists — activists due to the nature of their political struggle — who are jailed, the majority of Turkish journalists suffer profoundly from the erosion of editorial independence.

In other words, if it is prison for the Kurdish reporter and dissident who is affiliated with a minor publication, it is a big "open-air prison" for thousands of Turkish editors, columnists and reporters in corporate media — which covers more than 80% of the sector.

Regulation of broadcast media is stiffly controlled by the government. The "moral majority" is increasing its pressure to censor content in both the conventional and digital domains.

The so-called public broadcaster, TRT, as well as it largest news agency, Anatolian, are de facto subordinate to the state. The press cards are still issued with the involvement of the government.

Collective bargaining rights have almost entirely perished, due to media proprietors having chased out all trade union activity, making job security a matter between their lips.

Concentrated media ownership, as well as the large business activities of media proprietors in industries other than media, make the sector totally vulnerable to unholy alliances with the political elites, and keep journalism from its watchdog role. Coverage of any corruption, or power abuse, is almost non-existent, blocked by greedy and power-sensitive proprietors.

In a nutshell, the superficial analysis of Turkey in terms of how many Kurdish journalists are in jail is the tip of the iceberg. Media freedom, in Turkey 2013, is strictly intertwined with the issues of editorial independence.

Then, in such a broad context, all focus is warranted, and very timely. Concerns are widespread, as Press Freedom Day created a pretext for remembering why so many comments, reports, statistics and resolutions have appeared about Turkey lately.

"Across the EU’s border, Turkey’s government is attacking media freedom with ever more brazen impunity. … The EU is in — slow and lengthy — membership negotiations with Turkey. Any such candidate state is meant to meet basic standards of democracy, including a free and fair press before talks start. So where is the EU, and why has it not suspended talks until Turkey stops attacking the cornerstone of its democracy — the media?" asked Kirsty Hughes, CEO of Index On Censorship, in an article.

Actually the European Parliament passed a resolution, not so long ago, addressing all relevant issues.

The EP asked for a thorough revision in laws to lift all restrictions on media freedom, demanding also that the public broadcaster, TRT, comply with democratic norms of the EU. It underlined its concern for the fairness of all trials that are opened against journalists.

"(EU) notes with concern that most media are owned by and concentrated in large conglomerates with a wide range of business interests; reiterates its call for the adoption of a new media law addressing the issues of independence, ownership and administrative control," the resolution added.

In its annual Human Rights Report for 2012, published only days ago, the US State Department also painted a gloomier picture of the Turkish media domain.

"The authorities routinely censored media with pro-Kurdish or leftist content, particularly in the southeast, by confiscating materials or temporarily closing down the media source," it said.

"The government’s close business relationships with various media conglomerates further limited media independence and encouraged a climate of self-censorship. … Large, private holding companies that had a wide range of outside business interests owned most media. The concentration of media ownership influenced the content of reporting and limited the scope of public debate."

At home, the debate about the deteriorating state of the media is narrow, because the independence is scarcer than ever before. Yet, the voices of strong dissent now come from even from within the pious and moderately Islamist circles.

Some weeks ago, Turkey’s highly influential civilian group of intellectuals, The Journalists and Writers’ Foundation (JWF), affiliated with the Gülen Movement, broke its long silence and, following the series of sackings of prominent journalists by power-fearing media proprietors, issued a historic manifesto for freedom and rights.

It said, in a summary, the following:

"Being able to express marginal, radical or extreme views is a requirement of democracy and freedom of expression so long as such views do not transgress internationally recognized limitations such as promoting violence or hatred, or defamation. As recognized as an EU norm, any practice that restricts freedom of the press, such as political or commercial pressure or self-censorship is undemocratic and unacceptable.

"Commercial affairs of media owners should not be of such a nature that they restrict the freedom of the press. Pressure exerted on the media by political actors, the compliance of media owners to this pressure to protect their commercial interests and the use of media by media owners as a means of force and blackmail are all forms of interference that restrict the freedom of the press. To protect the dignity and principles of their profession, all journalists must take a stand against such forms of pressure."

Even President Abdullah Gül joined the dissent lately, with a powerful attack on proprietors to "resist pressure" (from the government). But for the power executives and media proprietors, it remains a dirty business as usual, to this day.