Valerie Amos, the United Nations’ chief official for humanitarian matters, says only a political solution can alleviate a growing humanitarian catastrophe in and around Syria. 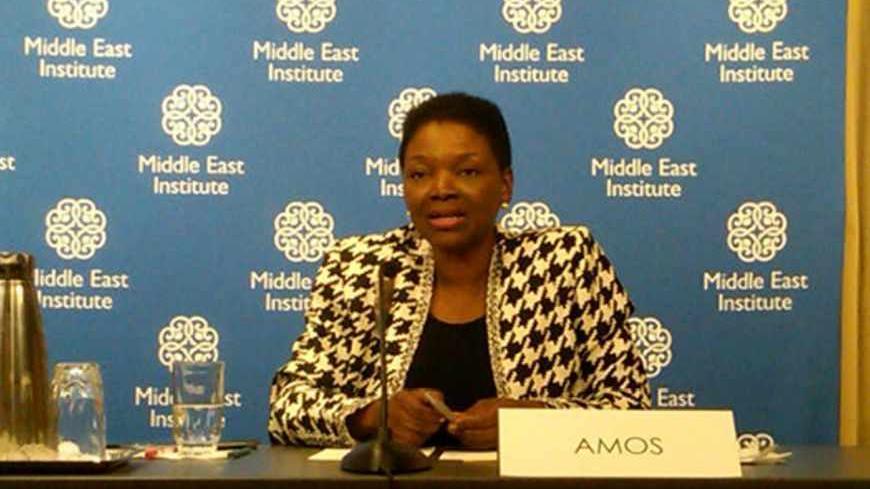 WASHINGTON — Calls to set up a no-fly zone or other refuge for displaced people within Syria face obstacles not only from the Syrian government but potentially from armed opposition groups, says the United Nations’ chief official for humanitarian matters.

Undersecretary-General Valerie Amos told a Washington audience Tuesday [May 7] that the proliferation of opposition militias — who now number about 1,000 — is complicating an already daunting challenge in delivering humanitarian aid to the Syrian people.

According to Amos, 6.8 million of Syria’s 20 million people are in need of assistance including 4 million who are internally displaced and 1.4 million refugees — a figure she said may grow to 3.5 million by the end of the year.

The crisis, she said, is “stretching our capacity to the limit” and there is “a real risk it will spread across the region.”

The Humanitarian Snapshot of Syria as of April 25, 2013. Courtesy of OCHA

Unlike the situation in Libya, where the country divided early in the revolt against Moammar Gadhafi into rebel- and government-held territory, Amos said the divisions within Syria more than two years after the uprising began are far less clear-cut.

“It’s not like Libya where you had a front line,” she said. “This is very much an urban crisis.”

According to UN figures, about 40% of food being provided by the UN World Food Program to 2.5 million people in Syria goes to opposition or contested areas and the remainder to parts of Syria still under government control.

The UN has been criticized by some members of the Syrian opposition for working too closely with the government of President Bashar al-Assad. Amos said there was a dearth of NGO partners to work with apart from the Syrian Arab Red Crescent. Opposition groups, she said, have recently created a humanitarian arm called the Assistance Coordination Unit and have promised to identify partner groups.

“Our job is not to take sides,” she said. “Our job is to put the people first.”

She praised the “extremely brave” Syrian volunteers who assess the needs of their communities and facilitate aid shipments. One of their roles is to negotiate safe passage through checkpoints. Currently, Amos said, there are about 50 checkpoints between Damascus and Aleppo – half manned by the Syrian government, the other half by assorted militia groups.

Growing calls to create a no-fly zone or other haven within Syria so those needing aid do not need to flee the country do not take into account the fracturing of rebel forces, she said.

Amos lamented that the stalemate at the UN Security Council has hindered steps toward a cease fire and a negotiated transition in Syria, which is to the detriment of her work assisting Syrians who continue to suffer as a result of  the war.

US Secretary of State John Kerry is in Moscow for meetings with Russian Federation President Vladimir Putin to try to break the impasse over Syria in the wake of revelations of chemical weapons use and the worsening humanitarian and regional crisis.

The ultimate solution, Amos said, is a political deal that stops the fighting so that humanitarian organizations can begin the work of rebuilding Syria as well as tending to its peoples’ urgent need for food and medical care.

“This is a crisis that requires a political solution and there lies the challenge,” she said. The longer the war goes on, she added, the more dire the situation for Syrians and their neighbors.