Turkey’s Trouble at the Border

The longer the Syrian civil war goes on, the more Turkey is challenged by both its deteriorating border security and the Syrian refugee crisis, writes Tulin Daloglu. 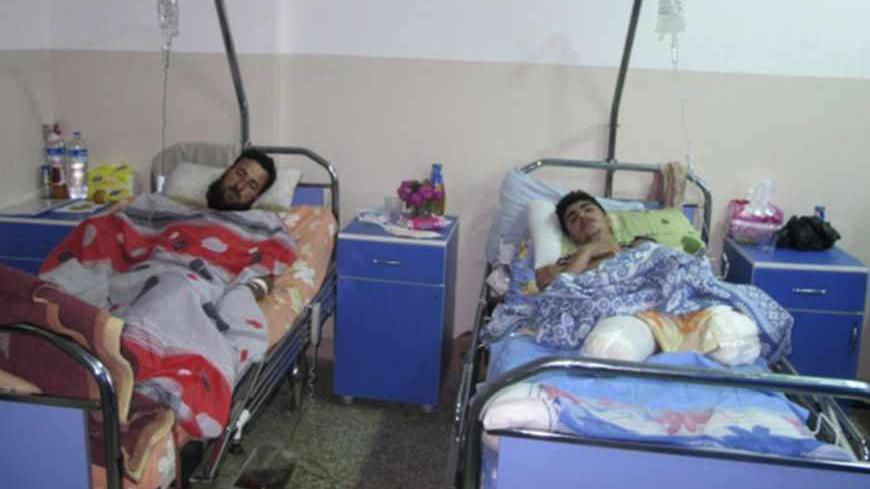 Wounded Syrian refugees, who activists said were injured during shelling by forces loyal to Syrian President Bashar al-Assad, lie in a hospital at Bab El-Hawa on the outskirts of Idlib, near the Syrian-Turkish border, April 30, 2013. - REUTERS/Abdalghne Karoof

Two recent developments concerning the painfully long Syrian civil war illustrate how Turkey is challenged to keep order at its border. First is the issue of massive numbers of Syrian refugees continuing to flow into Turkey, and the second is Turkey's dubious preparedness in the face of a potential chemical warfare threat.

The news broke Thursday [May 2] afternoon that gunshots were exchanged between Syrians trying to enter the country and Turkish security forces at the Akcakale crossing in Sanliurfa. Previously there have been incidents at border camps where Syrian refugees live inside the Turkish territory, but today's incident is the first of its kind that occurred across the border.

Turkey's state-owned Anatolian Agency (AA) reported that one police officer was killed and 11 were injured. "About a thousand Syrians wanted to enter the country without passports at the Akcakale border gate, but security forces did not allow them in," Akcakale Mayor Abdulhakim Ayhan told AA. "When police turned them away, they started to throw rocks at our customs gate. Then they set security checkpoints on fire. We put out those fires. Then as we were thinking things had calmed down, we started to hear gunshots."

A source at an international organization who spoke on condition of anonymity because of the sensitivity of the matter told Al-Monitor, "Although we will have to look into the details of this incident carefully, we're concerned that Turkey is now in a position of violating the international refugee law. It's not possible to conclude from what we gather from press reports why and how Turkey justifies turning down these people at the border gate. It does not matter if they have passports or not if they are escaping to safety from Assad's cruelty." The same source also said that while the world community is sincerely grateful for Turkey's generosity in taking care of the Syrians, they are concerned that Turkey's commitments will be tested as things get tough.

"We're unfortunately receiving reports that Syrians are getting piled up on the Syrian side of the border. The Islamic-leaning nongovernmental organizations like the Foundation for Human Rights and Freedoms and Humanitarian relief (IHH) are delivering aid to them, helping to set up camps on the Syrian side, and this helps Turkey to control the growing number of refugees getting into the country. They say all the camps are overflowing," he told Al-Monitor. "This is in direct violation of the international refugee law. You can't put these people out on the field as targets for the Syrian regime and tell them we will allow you in only after we prepare new camps and make your beds ready." While there are more than 200,000 Syrians in Turkey now, Turkish Foreign Minister Ahmet Davutoglu has said numerous times that if there is a need, Turkey is big enough to host all the Syrians.

A Turkish Foreign Ministry source in charge of Syrian affairs, however, told Al-Monitor that it's totally out of the question that Turkey has violated the international refugee law. "The news is misguided. This was not an incident between Turkey's security forces and the Syrian refugees escaping from Assad. This was initially an incident with three or five Syrians who had passports but refused to go through security control. They were carrying guns and munitions, and we don't allow them to carry such material inside Turkey," the Turkish diplomatic source said. "They have taken our generosity and mercy to such extreme levels that they consider themselves immune from any kind of questioning or security control. It's not acceptable behavior." This Turkish diplomatic source added, "Our security forces are totally in control of our borders. Syrians can't cross into Turkey from an unspecified point somewhere along the border. Because we're doing a great job, they have to come to the official border gates, and we have rules they need to abide by in this country. Guns and ammunition are not allowed entry into Turkey."

While it's not possible to verify the allegations independently and to fully comprehend what really led to this incident at the Turkish border gate Thursday, it's a fact that the longer this civil war goes on inside Syria, Turkey's policies will continue to be tested. Turkish Prime Minister Recep Tayyip Erdogan has declared that Turkey wants a regime change in Syria, and there have been many reports that allege the free flow of arms to the Syrian opposition through Turkey's borders. I have taken a position from day one in this column that arming the Syrian opposition is neither the right policy nor a solution, as these arms are not guaranteed to go in one direction only.

Moreover, the allegations about Syrian regime use of chemical weapons also revealed how Turkey is unprepared to tackle such a critical issue. On Monday, April 29, Turkish media reported that Reyhanli State Hospital was on alert as 13 patients from Idlib were brought in, suspected of having been affected by the chemical toxin sarin. The Turkish media reported that hospital personnel have taken emergency measures and sealed off the facility in case such a chemical agent is detected.

"There is no emergency, or any patient being affected by any kind of chemical weapon at our hospitals," Selim Matkap, head of the Chamber of Medical Doctors in Hatay, told Al-Monitor. "The media are reporting these stories. Maybe they have an agenda, or not, but we as doctors don't want to be part of any agenda. We had one patient in Reyhanli who was affected by organic phosphorus used in agriculture, and we treated the patient."

Matkap, however, questioned the level of awareness among people about potential chemical warfare. "There may be all the news about this issue, but the fact is that our hospitals and personnel are not prepared to face such a tragedy. We haven't received any training on it, nor we have been provided any gas masks and the like for our personnel, and our patients. Because there isn't anything like this happening, we're assuming that our government does not really believe that the Syrian regime has used or is going to use chemical weapons."

Erdogan, however, said Thursday that he will discuss the issue of Assad's regime using chemical weapons with President Barack Obama when he visits him in two weeks. As a member of the North Atlantic Treaty Organization (NATO), Turkey had appealed to the alliance for the deployment of Patriot batteries to increase its defense and deterrence capability in case of a potential misjudgment by the Assad regime in sending missiles to Turkey. While those Patriots have already been active on the ground, they don’t protect the land against any chemical warfare.

"It's clear that the Assad regime has used this [chemical weapon]," Erdogan said. "The opposition is superior on the land, but the regime is using chemical weapons, warplanes, and helicopters. The regime's only superiority is its air power."