In an interview with Shlomi Eldar, professor Kais Firro, an authority on Syria and Lebanon, claims that the Syrian regime can finally argue that Israel is the puppet master behind the uprising. 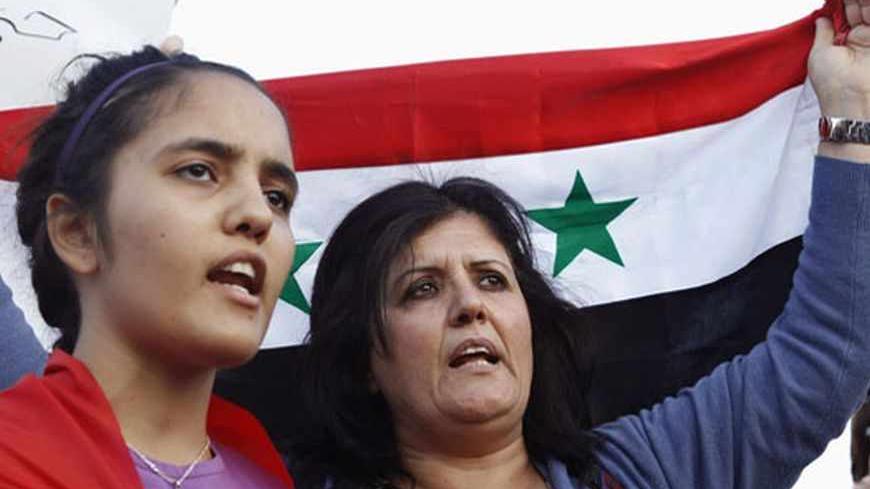 Jordanian activists hold a Syrian flag as they shout slogans against Israel during a protest to show their support to Syria's President Bashar al-Assad and condemning an airstrike in Syria, near the Israeli embassy in Amman, May 5, 2013. - REUTERS/Muhammad Hamed

“Israel’s alleged airstrikes in the Damascus region play nicely into the hands of Assad and the Syrian regime,” says professor Kais Firro from Haifa University. “In fact, they’re celebrating. It’s exactly what they needed.”

With Damascus reeling from a series of attacks, which Western sources claimed were conducted by the Israeli Air Force, I decided to approach Firro, an internationally acclaimed expert on Syria, Lebanon and minorities in the Middle East. He spent much of our interview flipping between one Arab news station to the next, trying to be as up-to-date as possible with every tidbit of information as it was released. In that time, he also managed to sketch out a complex outline of what is really going on in the great battle over Syria’s future.

“I can already see the impact that the bombing had,” he said, and he was not referring to the mushroom clouds of fire and smoke that rose over Damascus during the past few nights. “Now, Syrian President Bashar al-Assad and his men can state openly who the real force is behind the uprising. As far as Syrian pundits are concerned, it used to be 'the Agent' ('al-Waqil'), who took up arms against the Assad regime. Now it’s 'the Source' ('al-Asil'), who fights against the regime surreptitiously through 'the Agent.' With these attacks, claim Syrian commentators, Israel revealed that it is actually pulling all the strings. This certainly has an impact on the public opinion in the Arab world. I follow the public opinion in Syria very closely, and I can tell you that it is changing very quickly, without much push back. Until recently, people regarded the Syrian regime as the worst of all possible worlds. Now that’s beginning to change.”

Firro continues: “You can already see the beginnings of demonstrations in support of Syria. People identify with Syria now. They see it as a victim in some enormous plot to take down its government.”

Is the Syrian government’s interpretation for the timing of the attack — that Israel is trying to shift the balance of power — in Assad’s favor?

“Of course. The Syrian army had some major operational successes recently, so it is only natural that they would connect their victories against the rebel forces with Israel’s alleged attacks. Take, for example, the al-Qusayr region, which connects Homs with Lebanon. The Syrian army destroyed almost all the rebel forces there. It forced them out of all the villages. There are a few villages left in the Orientis region, but in my opinion it will all be over in two or three days. Fighters from outside the country have gathered in this region, including fighters from Jabhat al-Nusra [which identifies with al-Qaeda, and which has already been covered extensively by Al-Monitor] and other rebel forces. We have even begun hearing about negotiations under way with Jabhat al-Nusra fighters, who are prepared to surrender now that they are being defeated. The same is true in the east, where the Syrian army has scored some major victories and managed to force the rebels out. There are also battles under way in the Daraa Horan region and near the Israeli border. The Syrians are quite explicit in their claims that because of the rebels’ failures in these battles, Israel attempted to boost morale by attacking Syria directly. And of course, this has an enormous impact on public opinion. Note that even Hezbollah Secretary General Hassan Nasrallah has been recruited for the propaganda war, and not just for military operations. Just a few days ago, Nasrallah said, “We will not let Syria fall into the hands of Israel, America and the heretics.”

The big question today is whether the United States and the Western nations even have to arm the anti-Assad rebels.

“They’re already arming them, not directly, but indirectly. Do Qatar or Saudi Arabia manufacture arms? Where do the weapons come from? The United States gives the green light, and enormous quantities of weapons arrive. All you have to do is turn on the television to see the kinds of weapons that are showing up there. They are mostly US-made.”

Based on what you are saying, the Assad regime is very far from falling.

“Under the current conditions Assad will not fall, but the war will go on for years to come. Why? Because it involves religious and ideological elements, Take, for example, Jabhat al-Nusra, which we already mentioned. All the members of this organization have a sincere belief that any martyr — shahid — who falls in the battle over Syria will go directly to God. You can see that there are fatwas [religious rulings] about the uprising. From each one you can learn something about the many different groups and forces participating, and you realize that they will not concede. They are not afraid of dying. Dying is just a way to get to heaven, as far as they are concerned. When Hamas used to do that, we understood it differently. We were convinced that suicide bombers were doing what they did to get money for their families or some other utilitarian consideration. But the Jabhat al-Nusra forces in Syria really do believe that they are fighting a holy war.”

And you say that it could last years?

“Yes, because it is also quite obvious that there is someone willing to defend Assad’s regime, including ethnic minorities, liberals and the Syrian middle class. This includes most of the country’s urban population, which once demonstrated against Assad. They have since stepped back from that position and now support keeping the current regime in power.”

Would it be correct to say that this is class warfare?

“As historians, we like to reduce things to their simplest terms, but it is not always like that. We like easy historical labels such as Marxist, neo-Marxist, etc. But there are other factors at play here. There is a connection between the rural classes, poverty and religion.”

Who exactly are the forces that are fighting against Assad today, which we tend to lump together as “the rebels”?

“The people fighting there are members of al-Qaeda and other organizations such as Ahar al-Sham (the al-Sham family of Damascus), Jabhat al-Nusra and others. It’s a diverse mix of groups and sub-groups. A total of almost 30 groups are involved in the fighting.”

Is there cooperation among them?

“That’s a good question. There is cooperation, but there is also internal discord. They are fighting among themselves over everything: regions of influence, power, money and lots of other things.''

And there is a lot of propaganda.

''Of course. This enormous campaign includes an extensive propaganda campaign as well. The most obvious example of this is Al Jazeera, which is clearly slanted against Assad. It supports the rebels, regardless of the kinds of organizations that make up the rebel front. There are close to 100 religious networks, too, which broadcast sermons and fatwas and talk about 'wars of obligation' and 'holy wars' against the Alawites, as advocated by Ibn Taymiyyah [historical leader of the Hanbali school of Sunni Islam, which believed in following a rigid, literal interpretation of the Quran and hadith writings].”

“Add to this the national interests of Turkey and Qatar, which has a distinct interest in seeing Assad toppled. Listen, Syria is at the crux of a major battle. This is more than just some army fighting against rebels.”