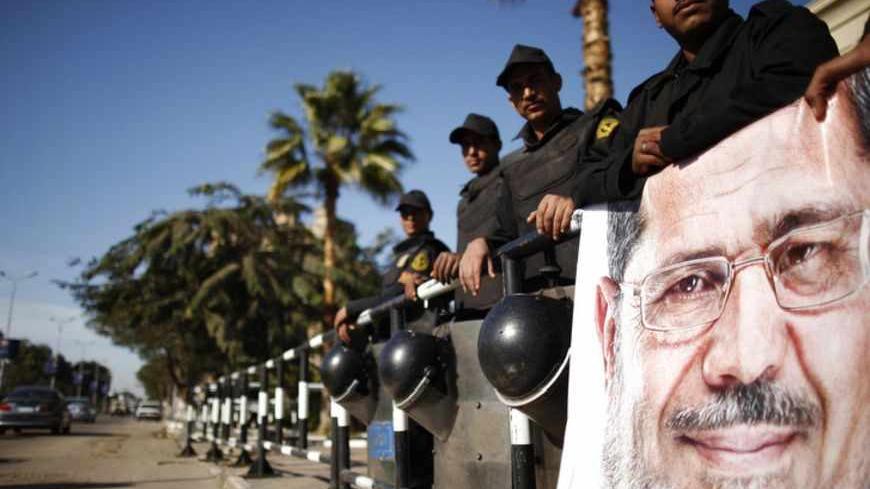 Policemen stand guard near a poster put up by supporters of Egyptian President Mohammed Morsi as they stage a sit-in outside the constitutional court, in Cairo, Dec. 23, 2012. - REUTERS/Khaled Abdullah

Tuesday’s Cabinet reshuffle [May 7] shed little light on Egyptian President Mohammed Morsi’s leadership and what the Muslim Brotherhood’s plan is for Egypt, at least for the next few months.

In the eyes of many, Morsi has not improved the government; he kept his much-criticized, colorless Prime Minister Hesham Qandil, then he appointed some new faces who were neither qualified nor experienced enough to run the country at this critical juncture. In addition, the premature leaks of “imminent reshuffle,” before cementing any deal with the proposed candidates for ministerial changes, has exposed the reluctance of many technocrats and politicians to join this government, and also reflected the current state of uncertainty in Egypt.

This view is based on the assumption that the reshuffle is aimed at addressing Egypt‘s political and economics woes. It is not — the current leadership has three goals from the new reshuffle: 1) to create a false perception that it is tackling Egypt’s problems, particularly on the economic front; 2) to portray the opposition as uncooperative by keeping Qandil as prime minister and thus successfully managing to put many off from joining the government, justifying appointing more Muslim Brotherhood cadres as ministers; and 3) as Issander el-Amrani argues, the Freedom and Justice Party (FJP) is working according to party logic, where members want to maximize their personal power that correlates with the Muslim Brotherhood's wider logic of placing its faithful in positions of influence.

Morsi has yet to formulate a solid plan for Egypt’s long-standing economic and political problems. His foreign trips are part of his efforts to look for answers and solutions. Therefore, during this delicate stage, loyalty is more important than experience.

This obsession with loyalty is evident in the choice of many new ministers, such as Yehia Hamed, a former spokesman for Morsi‘s presidential campaign. His previous marketing job at Vodafone Egypt does not necessarily qualify him to become minister of investment, but it will help the Brotherhood to solidify their grip on the domestic market, and pick the kind of investments that they see as fit and appropriate.

While Amr Darrag with his master’s in Soil Mechanics is certainly not the perfect candidate for the Ministry of Planning and International Cooperation, however, as an ex-member of the Muslim Brotherhood’s political committee (2002-2006) and current chairman of the Brotherhood’s Freedom and Justice Party foreign relations committee,  in the eye of the Brothers, he is the perfect candidate.

On the other hand, Morsi and the Muslim Brotherhood divide their opponents into two main groups: One they can crush, and the other they should appease. By keeping the interior and information ministers in the new Cabinet, Morsi and the Brotherhood view their opponents in media and security as defeatable. Morsi is determined to pursue the current strategy of fighting hostile media, and taming or neutralizing incompliant security forces.

Moreover, appointing Hatem Bagato as minister of parliamentary affairs, as described by Nathan Brown, may serve to improve the connection between the Cabinet and the Shura Council, which indicates that the campaign “to purge” the judiciary is put on hold, at least for now, and is replaced by “a divide and rule policy” by appointing a new minister of justice, Judge Mohamed Soliman, with his master’s in sharia, support of the controversial public prosecutor and his own personal feud with the judge's club head Ahmed el-Zend.

Also, by  keeping the minister of defense, Lt. Gen. Abdel Fattah al-Sissi, Morsi has reaffirmed that he is not willing to confront the military at any stage in the near future. While other Islamists, such as Hazem Abu-Ismail, were openly critical of Sissi, the Brotherhood was keen to paint a harmonious relationship with the military. The new government reaffirms that this policy is still ongoing and will not change at any time in the near future.

It is crucial to understand that the Brotherhood’s perception of harmony is reverting to monochrome rather than achieving color coordination.

They view the government’s institutions as a detangled, spaghetti-like, mishmash of loyal public servants and hostile opponents of various degrees. Therefore, in their opinion, untangling, by alienating and neutralizing their opponents, together with fortification of loyal figures in crucial positions is an urgent priority that supersedes solving any of the country’s problems.

Also, at this stage, public opinion and concerns for growing resentments are not high on the Brotherhood’s lists of concerns. In fact, the Muslim Brotherhood believes that the opposition rants, moans and pontifications are no more than a froth that will disappear quickly and will not make a dent in the Brotherhood’s popularity and its capability to run a successful, organized election campaign.

For Morsi, the new government is a win-win policy: If the government fails, he can claim it was only a short-term government, while if it survives, it can ensure an election victory for his party, the Muslim Brotherhood, in the next parliamentary election.