Jordanians may be becoming more xenophobic as the Hashemite Kingdom deals with pressures from Iraq and Syria. 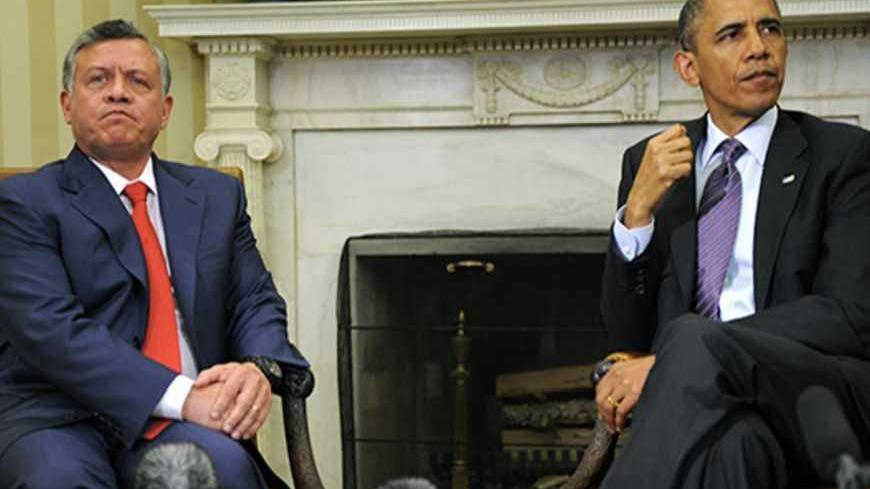 Women walk past riot police as they stand guard during a protest by Jordanian lawyers in front of the Iraqi Embassy in Amman, May 21, 2013. The demonstration was in response to a video purportedly showing Iraqi Embassy staff attacking Jordanian activists during a function in Amman. - REUTERS/Muhammad Hamed

Last week, the Iraqi Embassy in Amman held an event to remember mass-grave victims allegedly liquidated by the defunct Saddam Hussein regime, and  apparent pro-Saddam protesters who opposed the event were verbally and physically abused by the personal guards of the Iraqi ambassador. A video clip on YouTube showing the fracas has been seen by tens of thousands since. It prompted a public outcry both in the street and in parliament. Hundreds of activists protested in front of the Iraqi Embassy demanding that the ambassador be expelled and the guards arrested.

Protesters were eventually dispersed by anti-riot police, but not before cases of revenge against Iraqi individuals living in Jordan and their personal property were reported. Eventually, Foreign Minister Nasser Judeh told the deputies that the Iraqi government had formally apologized for the incident and that the Iraqi ambassador was called back to Baghdad.

It was the first time that Iraqis living in Jordan, most of them legally, were targeted by Jordanians. But public opinion was divided as Jordanians debated the incident on social media outlets. Pundits reminded Jordanians of their long history as a hospitable nation.

Jordan played host to hundreds of thousands Iraqi refugees who fled during the two Gulf wars (1990 and 2003). Most of them have been repatriated, and those who stayed have legal residence as investors and expatriates. Iraqis living in Jordan are mostly upper- and middle-class Sunnis or belong to other religious minorities. Some use Jordan as a temporary base as they wait for their immigration papers to be processed by countries like the United States, Sweden, Australia and New Zealand.

The current backlash is probably tied to increasing sectarian tension in Iraq, especially in the Sunni governorate of Anbar, which borders Jordan. The majority of Jordanians are Sunnis and in recent weeks pundits have warned of a spillover of sectarian violence from Syria and Iraq.

Earlier this month, unknown assailants burned down a guesthouse belonging to a Shiite sect in southern Mazar, near Kerak in south Jordan. The area contains Muslim shrines that are revered by Sunnis and Shiites alike. Notables in this area have warned the government of attempts by Shiite pilgrims to convert Sunnis. Iran has in the past requested that Jordan open its gates to thousands of Iranian pilgrims, but Amman has been wary of normalizing relations with Tehran.

Jordanian King Abdullah was the first Arab leader, in 2004, to warn of the creation of a “Shiite crescent” led by Iran that would extend from Tehran, through Baghdad and into Damascus and Beirut. The takeover of a pro-Iran government in Iraq, led by Nouri al-Maliki, and accusations by leading Iraqi politicians that he is enforcing a sectarian agenda, have confirmed Jordanian fears.

The war in Syria has increased doubts that Iran is waging a sectarian war in the region. Hundreds of Jordanian jihadists belonging to the Salafist movement have crossed the border to fight against the regime of Syrian President Bashar al-Assad. Many have died there. In fact, there were reports that a Jordanian has become the leader of Jabhat al-Nusra in Syria, believed to be linked to al-Qaeda.

Xenophobic sentiments were heightened after hundreds of thousands of Syrians crossed into Jordan seeking refuge from the Syrian conflict. So far, there are half a million Syrians in Jordan and many of them have found odd jobs, especially in the northern part of the country. Prime Minister Abdullah Ensour warned that Jordan was unable to receive more Syrians, with those already there having become a burden on the country’s resources. He announced that he was ready to declare north Jordan a disaster area.

Jordan has been saddled by economic woes since 2007. The unemployment rate is high, about 13% and 30% among youth. Fear that Syrian refugees are taking Jordanians' jobs and depleting national resources prompted parliamentarians, and senior officials, to call on the government to close borders with Syria.

And certainly when some Jordanians of Palestinian origin talk about acquiring their full rights as citizens, that same radical element warns that giving rights on a demographic basis will erase the Jordanian identity. While East Bankers and Jordanians of Palestinian roots have no ethnic, racial or sectarian differences, the radical element insists that political reforms should not open the way for a quota system.

It is interesting that a recent Swedish study, the results of which were published in The Washington Post, concluded that Jordan was among the least racially tolerant countries. In only two of 81 surveyed countries, more than 40% of respondents said they would not want a neighbor of a different race. This included 43.5% of Indians and 51.4% of Jordanians.

The results have shocked academics and commentators. Jordanians tend to look at themselves as hospitable toward foreigners. Jordan is a diverse country with ethnic and religious minorities. There are hundreds of thousands of Egyptian and Asian laborers working in the country. The study does not find a correlation between the degree of economic development and level of tolerance. For now, xenophobia is probably an innate reaction to surrounding regional events and heightened existential tension.