US military intervention would not have prevented, and will not prevent, radical jihadism in Syria. 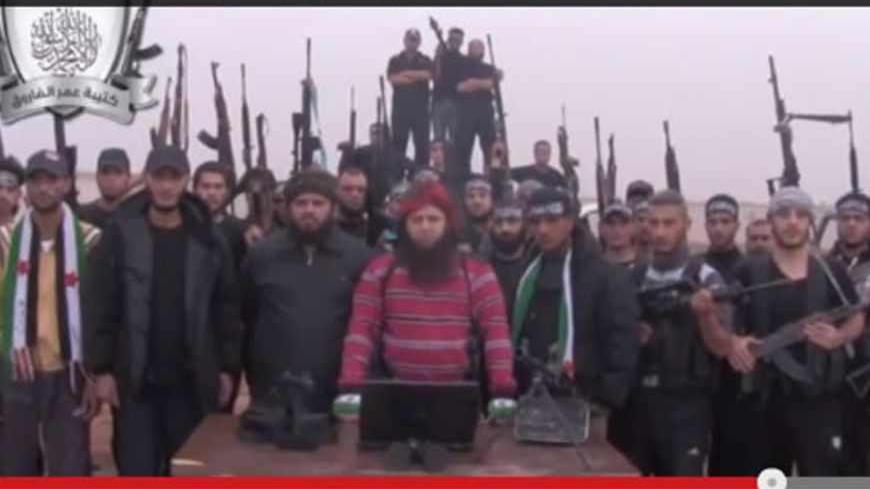 This image of the Omar al-Farouq brigade was taken from the group's website; Syrian Sunni rebel Khalid al-Hamad, who mutilated a corpse, is a member of the brigade. -

The recent gruesome video of a Syrian rebel soldier, Khalid al-Hamad, mutilating a corpse has triggered shock and outrage, fueling a tense debate over the wisdom of supporting the armed uprising against President Bashar al-Assad. While some consider the video as the ultimate proof that backing the rebels is a bad idea, others view the radicalization and increasing brutality of the armed opposition as a direct result of the weak Western response and US dithering. This later opinion is based on the assumption that an early and decisive intervention in support of the moderate factions of the Syrian rebels would have marginalized the radicals and reduced their recruiting abilities.

While debating the brutal war in Syria — and the possible solutions and the inherit risks associated with each option — there are a few issues to consider about radical groups, the factors that help increase their power, and, more important, whether early military intervention would have prevented the radicalization of the Syrian opposition.

Collapse of the state

Undoubtedly, the collapse of law and order has had an enormous impact on the rise of non-state players, particularly radical groups. Even the short-term security vacuum has created enough of an opportunity for jihadists to pour in. For example, the January 2011 revolution in Egypt has compromised security and helped jihadists to build their own safe haven in the mountains of Sinai. Syria is no different; in fact, it is easier to get into Syria due to its porous border security, particularly along the borders with Iraq and Lebanon. The lack of intervention in Syria has resulted in a chronic collapse of law and order. Any military intervention, however, would also cause law and order to crumble, and result in a more acute form that would encourage (rather than discourage) radical groups to pour into Syria under the pretext of helping the rebels.

Radicals are already in place

Jihadi backpackers are already around in abundance throughout the region, from Afghanistan to Somalia. In the name of jihad, they are continuously seeking new adventures and opportunities in any country they see as vulnerable. As long as the ideology exists and funds are available, jihadists will always be able to survive and recruit new members; no invitation is required, and no permission is needed. If the lack of outside help has given the radicals a chance to flourish in Syria, any Western intervention could easily give them the excuse and the motive to join the war in Syria under various pretexts.

Perhaps the most important factor that was underestimated in Syria is the depth of loyalty and strength of the pro-Assad camp. Many prematurely predicted the downfall of Assad, citing that his allies would desert him at some stage. It turns out to have been a miscalculation by Western observers.

Remember that jihadism is not an exclusive Sunni phenomenon; Shiite jihad is also a flourishing business. The Lebanese guerrilla organization Hezbollah is a perfect example. The assumption that a collapse of Assad’s regime would lead Hezbollah, and its patron Iran, to give up on Syria is wishful thinking to say the least. If Assad was ousted, the Shiite Crescent would suffer a huge setback, but their resilience and tenacity would help them endure the pain, and formulate a new survival strategy. For them, the best comeback is to declare jihad in Syria, and hence a counter-Sunni jihad could easily emerge. In other words, while an early military intervention in Syria might have prevented the leak-in of Sunni jihadists, the weakness of a wartorn post-Assad Syria would almost certainly invite them in in the name of fighting Shiite terrorists. Thanassis Cambanis argues that Syria could turn out to be Iran’s Vietnam, but it could also easily be the opposite: Turning Syria into Vietnam could be the Iranian revenge.

Weapons outside of disciplined military forces are seductive tools that can easily inspire exploitation and violence. In a police state like Syria, armed rebellion unleashes rancid chronic resentment and transforms it into raw anger that is difficult to control with logical thinking. Once weapons are available, anger quickly devolves into sick atrocities of unimaginable scale.

Any military intervention, particularly without boots on the ground, would not prevent such atrocities from happening; it might reduce its extent, but not enough to stop the cycle of revenge that would follow the collapse of the current regime.

Libya is one example of an early successful foreign intervention that failed to prevent revenge-fueled action. Libya also highlighted how enormous a challenge it is to collect arms at the end of the war. The recent [May 13] deadly car bombing in Benghazi is one of many examples of the blowback of weapons availability and their impact on the state. There is no reason to believe that Syria would do better; in fact, it is almost certain that it will do worse. Fortunately, Libya is an oil-rich country that can rebuild itself, but Syria is much poorer, with limited resources. The combination of poverty, armed militias and radical preaching is a very toxic cocktail ready to explode.

Fouad Ajami, for one, has argued that after the fall of the Syrian tyranny, better politics may take hold in Syria. This assumption would only be applicable if all stakeholders learn lessons from tyranny and are willing not to repeat it. We must acknowledge, however, that the end of Assad would not lead the Iranian regime to embrace liberal democracy in Syria, nor it would stop radical jihadists from exploiting a post-regime fragility to corrupt and recruit others.

There are no easy answers for the complex Syrian conundrum, but let’s not delude ourselves that early intervention would have been the perfect remedy for Syria. Radicalism is a much more complicated phenomenon, while brutality, revenge and eye-for-an-eye are all part and parcel of the savagery of war. However, it's crucial to prevent the fight for Syria and the fight against Assad from becoming mutually exclusive. Syrians have rebelled against Assad to achieve freedom, democracy and human rights. Tolerating radicalism would signal a huge defeat for Syria, which would be more tragic than the current bloodbath.