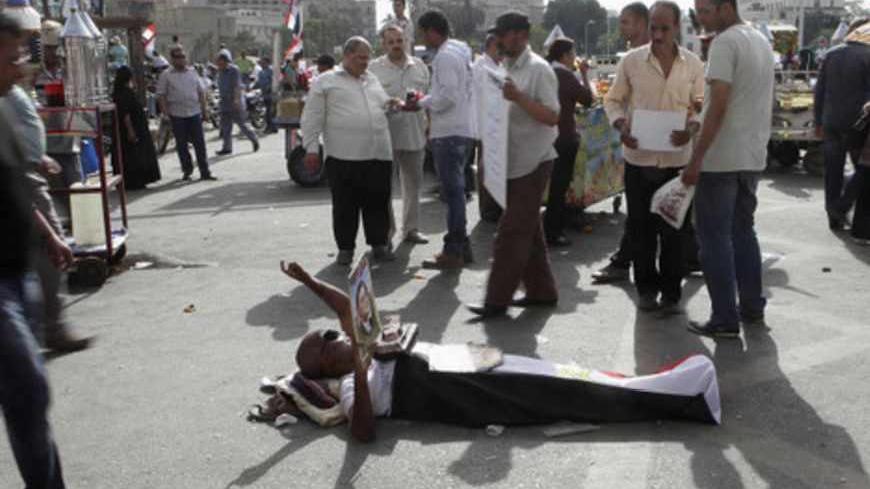 An anti-government protester, who is covered with an Egyptian flag and has a model depicting a tank, holds a picture of former Egyptian President Gamal Abdel Nasser while lying down in Tahrir Square in Cairo, May 17, 2013. - REUTERS/Asmaa Waguih

Several critical pieces of draft legislation are being debated in Egypt at the moment. Very visibly, the debate couldn’t be more fierce and heated, its tone any more existential, more filled with a remarkable blend of fact, confusion, hyperbole, political proclamations of great national progress and powerful accusations of political self-empowerment. In fact, the debate is fierce to the extent that even the legitimacy of the body tasked with legislation itself at the moment, the Islamist-dominated Shura Council (parliament’s upper house), is itself a matter of contest and debate. The Shura council, which remained (as of yet, as a case pertaining to it is currently in the constitutional court) undissolved following the lower house’s dissolution last year, was tasked under the new constitution with temporary legislative powers till the new parliament was elected, with the promise it would only debate urgent matters and pass national consensus legislation. The reality, nonetheless, couldn’t be any further from that. Shura is virtually conducting itself like a full parliament, and its legislative agenda has been anything but a source of national consensus.

Out of the myriad draft laws out there, whether already in Shura or due to head there for debate, seven key laws currently stand out, each of which would have radical impact on Egypt, all varyingly denounced by the opposition and other independent groups. Here’s a brief overview:

Bassem Sabry is a writer and Egyptian blogger who covers the region on An Arab Citizen. On Twitter: @Bassem_Sabry​