The Red Line in Syria Has Long Been Crossed

Shlomi Eldar wonders why the world waits for the use of chemical weapons to launch a military operation ending the bloodshed in Syria. 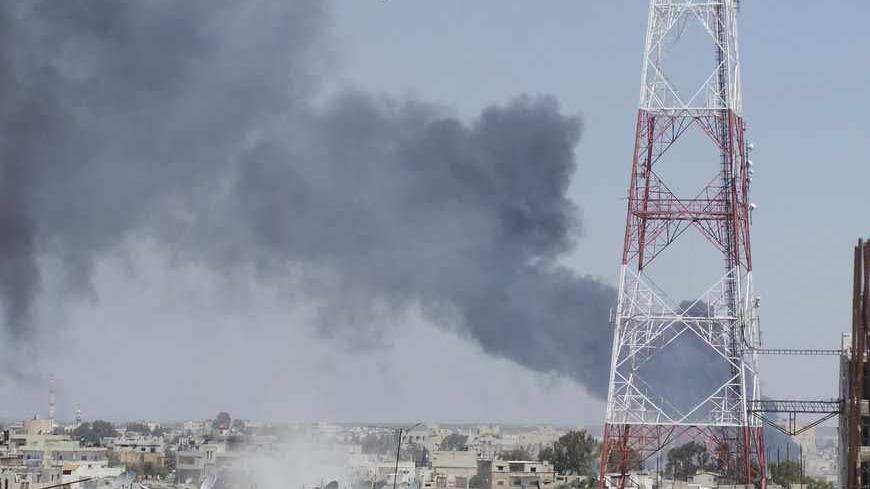 Syria, O Syria! How could the world have been so quick to get used to the mass murder taking place there? And the disposed, the refugees too: The whole issue has become so banal, so trite. They pass beneath the radar of the world’s media outlets, which are far more interested in making predictions and reiterating the same old questions: “When will Syrian President Bashar al-Assad fall?” “Will he fall at all?” “What will happen there after he’s gone?” “Will the rebels be able to collect the pieces of a shattered Syria and run a functioning country?” Late last week, a new question joined the roster: “Has Assad crossed the red line?”

The red line in question isn’t the line that Prime Minister Benjamin Netanyahu drew with a magic marker on a picture of a bomb with a fuse as he stood before the UN General Assembly. Despite its name, the proverbial red line does not refer to the blood of all the men, women, and children, who were slaughtered by Bashar Assad either. The new red line was advanced by President Barack Obama himself, and it refers exclusively to the use of “tie-breaking weapons,” that is, the chemical weapons that Syria possesses but which remained stored in its arsenals until now. Only if it is proved beyond all shadow of a doubt that Assad and his army used weapons of this sort, or in other words, crossed the red line drawn by the White House, will the world be unable to stand idly by. Then and only then will it be force to intervene with military force.

Almost 80,000 people have been killed since the Syrian uprising began (based on reports from the opposition and human right organizations). In Syria, blood flows like water. The vast numbers of bodies tossed into the Euphrates River have caused it to run red, and yet, for the past two years and more the international community has not drawn any lines, red or not, that the Syrian strongman must not cross. Only now, after finding indeterminate evidence that chemical weapons may have been used on Syrian soil, President Obama has said, “That is going to be a game-changer.” Obama also added ''to use potential weapons of mass destruction on civilian populations crosses another line with respect to international norms and international law."

Of course, it is not even certain yet whether Assad actually used chemical weapons. We may yet find that this was just another attempt by the rebels to manipulate public opinion and convince those parties still sitting on the fence to intervene on their behalf.

Regardless, the question must still be asked: Where was the red line until now? An estimated 80,000 Syrians have already been killed, and brutally at that. They were bombed, strafed, shot, tortured, and slaughtered in cold blood by Assad’s thugs (the Shabiha), and no one has drawn a line of any color whatsoever. But the moment there is some evidence, no matter how scanty, that chemical weapons were used, the world is up in arms.

When Syrian MiGs fire rockets at the civilian populations of Homs, Hama and Aleppo, would it not be fair to say that the victims died an agonizing death? The bodies of people who were bound and shot in the head have been fished out of the Euphrates River. Is that not evidence of them being tortured to death?

Security experts explain that the obsession with chemical weapons stems from the fear that such “unconventional weapons” might fall into the hands of terrorist organizations, be smuggled out of Syria, and used against civilian targets in other countries.

Such a claim is easily refuted.

It is well-known that the anti-Assad forces are a hodgepodge of armed militants who are united by one single objective: the goal of bringing down the Assad regime. I have no idea what might happen to these “unconventional weapons” were they to fall into their hands. Nevertheless, if the international community esteems that the most vital imperative is to keep these weapons under lock and key — more so than preventing the bloodbath now taking place — then based on this logic, the goal should be to strengthen Assad, and not to support his opponents. That is the only way to be sure that these unconventional weapons do not find their way into the hands of terrorist organizations.

“When you set a red line, you are providing the enemy with the capability to decide when you must act for you, instead of you deciding to act when it is operationally expedient. At the same time, it also determines what acts, such as the massacre of 80,000 people, do not demand action.”

In other words, the deaths of a few from chemical weapons would outrage the United States and the West more than tens of thousands of casualties who died as a result of missiles and rockets, or who were slaughtered in cold blood by the Shabiha, who assaulted neighborhoods and villages alike to teach the locals a “lesson.”

The humdrum routine of evil and death is no longer very interesting. Like any routine, it is no longer “news.” The focus has shifted to “Who used chemical weapons?” and “Who checked the evidence indicating that they were used?” The discussion about what is actually happening in Assad’s blood-drenched country has been egged on by some random red line, even though, in truth, there are more and more victims of violence every single day. This plain fact is obscured by a thick haze, the result of focusing on the wrong issue as delineated by that red line. And yet, this gives the Syrian Army an opportunity to continue suppressing the rebels and killing civilians.

They may be using conventional weapons to get the job done, but even that can be very unpleasant.