President Barack Obama’s visit to Israel is not motivated by a desire to win over the Israeli public, writes Akiva Eldar, but rather by the need to salvage the standing of the United States as an influential power in the region. 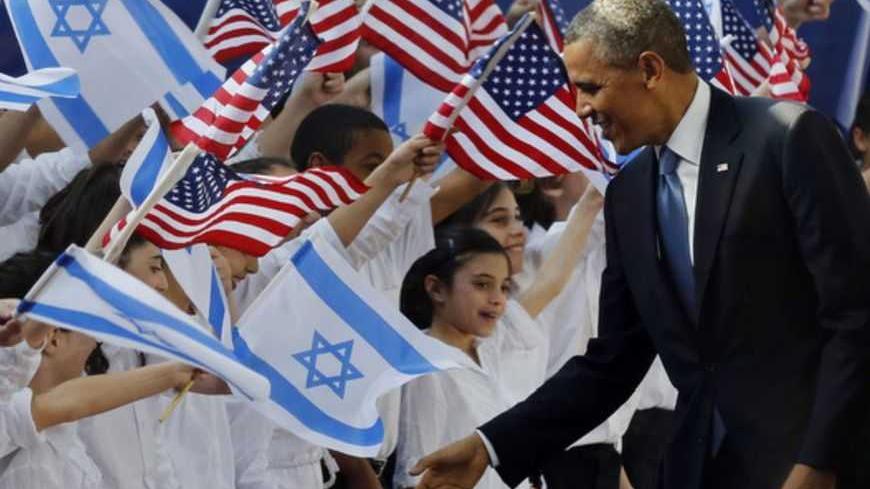 US President Barack Obama shakes hands with children before he signs a guest book at the residence of Israel's President Shimon Peres in Jerusalem, March 20, 2013. - REUTERS/Larry Downing

Already in his first speech upon landing in Israel, US President Barack Obama did not limit himself to polite niceties, as expected from an American president on a first visit to Israel. The important visitor stressed the winds of change blowing through the Middle East and pointed to the opportunities and hopes that they carry for the pragmatic forces in the region. But he was careful to warn of the heavy price of missing these opportunities for positive change, and of the dangers posed by that loss.

Most analysts explain that President Barack Obama’s visit to Israel is a make-up visit designed to repair the damage to his public standing in Israel for skipping Jerusalem on his way to Cairo in 2009. The question is this: Why does the leader of the free world need the sympathy of the Israeli public? Why is the leader of the strongest global power making such an effort to court a country with a population equal to about two percent of the US population?

Who says an American president has to make a pilgrimage to Jerusalem? Since the founding of the state in 1948, no more than four presidents have visited us (Richard Nixon, Jimmy Carter, Bill Clinton and George Bush, Jr.). Having been elected to a second term, Obama obviously has no need to kiss up to Jewish voters. Just this year, he sent his vice president, Joe Biden, to speak at the annual convention of the pro-Israel lobby AIPAC. And there’s still more than a year and a half to go before mid-term elections for both houses of Congress.

Giving up the leading role in the play entitled “The Peace Process” is a declaration of bankruptcy by US foreign policy.

They say that Obama is taking the trouble to come here in order to coordinate policy regarding Iran’s nuclear program with Prime Minister Benjamin Netanyahu. In fact, when Obama decided to visit Israel, it wasn’t even known whether Bibi (Netanyahu) would manage to put together a government. When the two sit side by side, no one will know which way the wind is blowing on the Iranian issue in the new security cabinet.

To top it all, when the US president wants to discuss some issue with the head of a foreign nation, he does not order Air Force One to be fueled and drag himself to the other end of the world. He has bigger worries at home than being liked by the Israeli public. He could have conducted the discussion on Iran with Netanyahu at the White House. Bibi has never turned down an invitation to pose for a photo in the Oval Office.

So why is Obama bothering to come to Jerusalem, Ramallah and Amman, at a time when the American and international economies need his attention so badly? No, it’s not Middle Eastern oil, which for many generations has been flowing through the arteries of American leaders; the dependence of US industry on the oil wells of the Gulf States is declining with each passing year.

The answer is simple: Obama is coming here to try and salvage what’s left of US standing in the region. An America that abandons the Israeli-Arab conflict to its fate is not worthy of the title “world power." Giving up the leading role in the play entitled “The Peace Process” is a declaration of bankruptcy by US foreign policy. One can assume that Obama knows the status quo between the occupier and occupied cannot go on forever. As an American diplomat once told me, “Your conflict is like a car with a transmission which has only two gears — drive and reverse — and the driver has to choose one. Either forward or back. Park is not an option.”

The 2009 Nobel Peace Prize laureate does obviously not want the third intifada, signs of which are emerging on the ground, to be named after him. Unlike Netanyahu, who refuses to see any link between the Iranian problem and the Palestinian problem, Washington, Brussels, London, Berlin and Paris understand full well the relationship of an attack by the Jewish state on Iran with an attack by the Jewish state on Arab citizens. The Iranians have for years been inciting the Arab street against Israel. When the Al-Jazeera network airs pictures of Israelis attacking an Islamic state next to reports describing Jewish soldiers storming Palestinian neighborhoods, young Muslims around the world set fire to US flags alongside Israeli flags. Obama has no desire for this failure to bear his name.

Twenty-two years ago, then-president Bush, Sr. identified an opportunity to enlist the international coalition that had been mobilized by the United States to act against the aggressive Muslim regime of Saddam Hussein in Iraq. The Madrid Conference, convened in 1991 with the participation of an Israeli delegation headed by then-prime minister Yitzhak Shamir and then-deputy foreign minister Benjamin Netanyahu, led to the Oslo Accord.

Ten years later, Bush, Jr. identified the potential hidden in Saudi Arabia’s frantic reaction to the Sept. 11, 2001 terror attacks and encouraged the states of the Arab League to support the peace initiative that was born in Riyadh.

The echoes of Obama’s visit to the region will resonate in the halls of the Arab League summit convening in Qatar next week. The historic initiative will soar or sink on Obama’s watch and with it, US influence over the punctured ship of the Middle East.