Stuart Bowen, the US official in charge of monitoring $60 billion spent by the US on Iraqi stabilization and reconstruction, says 15% was wasted, millions were stolen and the US government is still not properly organized to carry out such operations, writes Barbara Slavin. 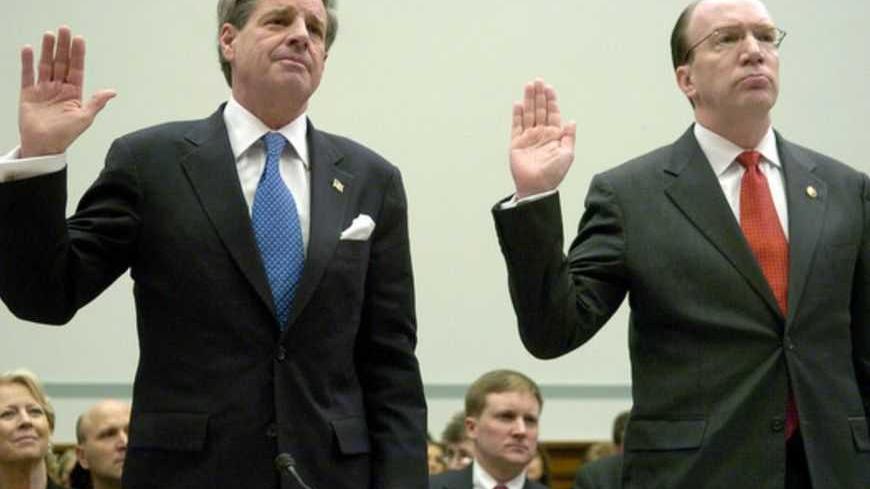 Then-US Ambassador to Iraq Paul Bremer (L), former head of the Coalition Provisional Authority, and Stuart Bowen, the US special inspector general for Iraq reconstruction, are sworn in at a hearing of the House Oversight and Government Reform Committee on the management of US funds in Iraq, on Capitol Hill in Washington Feb. 6, 2007. - REUTERS/Jonathan Ernst

If the United States ever tries to rebuild another broken country — say, Syria — it should focus on security, start small and make sure there are independent people on the ground to monitor the projects from the start.

These are among the common-sense lessons gleaned from the checkered record of Iraq, where the US has spent nearly $60 billion on so-called stabilization and reconstruction — of which at least $8-10 billion was wasted due to lack of security, poorly executed contracts and corruption, according to a new report.

Yet there have also been some successes, according to Stuart Bowen, one of the few Americans dealing with Iraq from nearly the start of the US invasion. In 2004, Bowen, a former associate counsel for President George W. Bush with scant prior Middle East experience, was appointed Special Inspector General for Iraq Reconstruction (SIGIR). Since then, his office has uncovered serious financial crimes, recovered millions of dollars for American taxpayers and redirected funds to where they could do more good for the Iraqi people.

“We’re the only entity that stayed,” Bowen told Al-Monitor in an interview at his Virginia office preceding release Wednesday, March 6 of the final report.

US military, diplomats and contractors cycled in and out of Iraq after tours as short as three months, while some of Bowen’s staff stayed for four or five years, he said. Bowen, himself, has visited Iraq 34 times. His agency is due to go out of business in September after resolving 60 final cases and seeking to recover $100 million on top of $191 million paid back to the US Treasury since 2004, he said.

Overall, Bowen said, his office has produced “benefits” worth $1.6 billion in part by identifying funds that could be put to better use. But Bowen said his estimate of waste was conservative and that the US is still not properly equipped and organized to deal with such contingencies.

“We are not well-structured to execute these things,” he said.

The SIGIR report was blunt: “As things stand, the US government is not much better prepared for the next stabilization operation than it was in 2003.”

Bowen has suggested creation of a new office to bring together expertise from Iraq and Afghanistan now scattered among the departments of State and Defense and the US Agency for International Development as well as private contractors. But given current budget constraints, that looks doubtful. While Bowen conceded it is also unlikely that the US will replicate the Iraq — or Afghanistan — experiences any time soon, he said, “We likely will do Syria. My concern is how do we [do so] in an integrated fashion.”

Much of what went wrong in Iraq over the past decade is by now well known.

The Bush administration, claiming Iraq had weapons of mass destruction, invaded with too few troops and little planning for the post-Saddam Hussein period. Looting further damaged a country already in disrepair after years of sanctions and mismanagement. The US compounded the mess by disbanding the Iraqi army and approving deep de-Baathification, “putting 500,000 men out of work without pay or pension,” the report notes.

Those original sins made rebuilding Iraq essentially impossible for the first few years. But the US still poured in money, much of it in cash.

The results were predictable.

“The chief period of criminality occurred from 2003 to 2007,” Bowen told Al-Monitor. “Things hit bottom from 2005 to 2006, into the first quarter of 2007” as sectarian violence escalated. He said it wasn’t until the surge — which sent in thousands more American troops and paid Iraqi Sunni militias — that the situation began to improve.

Of all the US money sloshing around in Iraq, Americans stole millions but the Iraqis stole more, Bowen said.

The most egregious case occurred from 2004 to 2005, when nearly $1.3 billion to equip an Iraqi “quick-reaction force” went for bribes and substandard equipment, including Russian helicopters that could not fly. The culprits — then-minister of defense Hazim al-Sha’alan and his Iraqi-Polish chief procurement officer, Ziyad Qattan — fled Iraq and have not been brought to justice.

However, SIGIR audits and investigations have led to the conviction of 82 members of the US-led coalition. The most notorious was US Army Major John Cockerham. According to the report, Cockerham “received more than $9 million in kickbacks” for awarding contracts for bottled water and other essential items. He was sentenced in 2012 to 17 and a half years in prison; three other members of his family were also convicted.

When money was stolen, projects suffered. According to the report, “almost 40% of the projects [inspected by the US] had major deficiencies.” Among the worst: a prison in Diyala province that was abandoned after the US spent almost $40 million on it; the Baghdad Police Academy, which leaked raw sewage through the ceilings; and the Fallujah waste-water treatment plant which, Bowen said, “took three times as long, cost three times as much and is serving only a third” of those projected to benefit in the town that was the birthplace of the Sunni insurgency.

The lessons from Iraq, he said, are obvious: Focus on security, start with small projects, put monitors on the ground to keep track of what everyone is doing and develop a better personnel system to bring “appropriate people […] to carry out the mission in an effective way.”

Yet Bowen — and some other US and Iraqi officials quoted in the final report — said there were also some significant achievements, even if most projects took too long and cost too much.

Bowen said US funds also “catalyzed” the resurgence of both electricity generation and Iraq’s oil sector. According to the report, by 2015 the Iraqi electrical supply from the grid will finally catch up with demand. Already last year, Iraqi oil production exceeded three million barrels a day and is slated to at least double by 2020.

Among the most successful projects, Bowen said, was the “pipeline exclusion zone” — a security system that protected Iraqi pipelines from insurgent attacks by using fences, personnel and guard towers.

But even these accomplishments have potential downsides.

Bowen noted that the new army and special-operations force trained by the US are under Prime Minister Nouri al-Maliki’s direct command and that their “power could be abused” by the increasingly autocratic Shiite leader.

Sectarian fighting has resurged in the last six months and corruption remains a serious threat in a state that relies on oil revenues. A quarter of Iraqis live below the poverty line and fewer than 40% of adults are employed. Iraqis complain that US-funded job programs are not achieving results.

While the northern Kurdistan Region is relatively stable, the latest State Department travel advisory for Iraq, issued Feb. 25, warns Americans to postpone all but essential visits and notes that “regardless of the cause, terrorism or criminal, violence throughout Iraq remains at critical levels.”

Asked whether the entire US endeavor in Iraq had been worth it, Bowen declined comment, saying that was up to Iraqis to decide.

For him personally, he said, “the most difficult moment” came when one of his auditors was killed on March 24, 2008.

On that day, which happened to be both Easter Sunday and Bowen’s 50th birthday, the Shiite militia leader Muqtada al-Sadr launched a campaign of rocket attacks against the US Embassy.

Paul Converse was in his trailer, having just returned from his office and getting ready to go to the gym, Bowen said. A rocket hit in front of the trailer, which was penetrated by shrapnel. Converse suffered a mortal wound. A picture of him hangs in the entrance to the SIGIR office in northern Virginia and over it, the words “In Memoriam.”