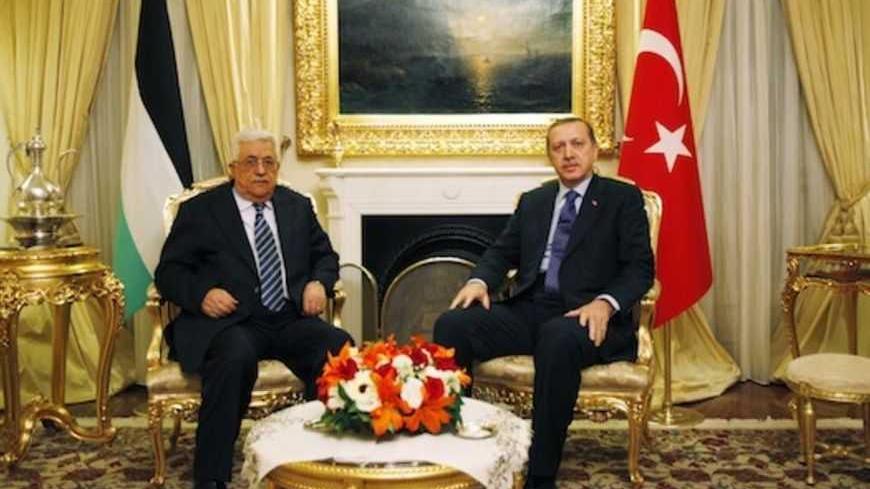 Turkish Prime Minister Recep Tayyip Erdogan didn't need to declare a connection between Zionism and racism to gain popularity among Palestinians. His most recent speech spurred angry reactions from Israel, adding fuel to the fire in relations between Tel Aviv and Ankara, which have been tense since the Marmara flotilla raid off the coast of Gaza three years ago.

People walking through the streets of Gaza Strip can find images of Erdogan and shops that carry his name. Newborns have even been named for him on birth certificates in Palestinian hospitals, reflecting love for Erdogan and the role he plays. Meanwhile, Palestinians sing of the support they wish to see from their Arab brethren.

Contrary to the religious, emotional and historical trends of the Turks regarding the Palestinian issue in general, and particularly given the Justice and Development Party’s Islamist inclinations, Turkey’s concern for the Palestinian cause is based on principled, legal and political premises. Erdogan spoke of these premises in his remarks during the Davos forum two years ago and at the UN Alliance of Civilizations (UNAOC) a number of days ago in Vienna, both of which were condemned by Israel.

Turkey’s efforts with respect to the Palestinian issue are assumed to have as their goal a just and comprehensive peace, as an indispensable part of Turkey's “strategic depth” and “dispute settling” policy, espoused by Turkish diplomat Ahmet Davutoglu since he became foreign minister. The Turkish position on Palestine supports demands for a state based on the 1967 borders, with its capital in Jerusalem. In a practical sense, this requires supporting the Palestinian Authority and its right to defend itself against the occupation and blockade, and in turn supporting Hamas.

In the end, Turkey appears concerned with the unity of Palestine — what can be referred to as the “rationalization of Hamas.” This requires abandoning other trajectories that have been exploited for purposes that do not serve the Palestinian cause, the Palestinian people or the entire region.

Some have pointed to the dwindling of contributions to the Palestinian cause in the wake of the Arab revolutions. That's produced a lack of media attention that suggests the Palestinians have been weakened, as Arabs are preoccupied by their own domestic situations, not with the cause of Palestinian victory and animosity toward Israel.

In evaluating its relationship with Turkey during the Arab spring, Palestine has watched how these regional changes have affected the movement of Turkey’s foreign policy toward Palestinians. Turkey has gained the momentum to revitalize its role in regional issues, including the Palestinian issue.

This has increased as the reservations and sensitivities towards Turkey that prevailed in Egypt during Mubarak's regime have abated, as Egypt has become increasingly concerned with its own domestic affairs. Turkey adopted an early position in support the Arab revolutions, seeing them as an extension of the Palestinian people’s revolution against the Israeli occupation. As a result, the Palestinians have sung the praises of Turkey as champions of the people and of “principles at the expense of interests.”

Turkey’s Palestinian policies suffered serious setbacks as relations with Israel deteriorated following the “Freedom flotilla” incident. Turkey terminated its role as mediator, and lost the mechanisms that had authorized it to put real pressure on Tel Aviv, in light of Washington’s bias towards it.

Because of the reality of the Arab revolutions, the deterioration of Turkey’s relations with Israel, Syria and Iran — paradoxically — have strained its ability to effectively intervene in the Palestinian issue. The issue no longer occupied the same place in its agenda, having become less important in the wake of inflammatory events and a series of serious challenges to Turkish foreign policy and regional developments in Syria and Iran. The Syrian crisis has had marked repercussions within Turkey, especially regarding the issue of the Kurdish Workers' Party (PKK).

On the other side of the equation, Palestinians want to hold onto Turkey’s role, since Turkey is critical part of the regional playing field. The Palestinians recognize their religious connections, shared historical and cultural background, and the central position of the Palestinian cause in Turkish foreign policy. Turkey’s role towards the Palestinians carries more weight than other countries in the region who are preoccupied with their domestic affairs, as affirmed by Ankara's activity on the ground in the West Bank and the Gaza Strip, particularly through its financial and economic aid.

We can see why the Palestinians have preserved the balance of both the armed and negotiating aspects of its relations with Ankara. The Palestinian Authority believes that a trusting relationship with Turkey protects its regional depth, which has regressed since its top ally, Egypt, has declined in regional importance. Turkey’s official commitment to the peace process and its open call for negotiations between Palestinians and Israelis are a clear part of Ankara's foreign policy.

Hamas feels that Erdogan’s Turkey represents the most welcoming embrace in a region that's suffered upheavals. Several of Turkey’s cities have accommodated Palestinian refugees affected by the crisis in Syria, and Hamas leadership has met with influential figures from powerful Turkish circles, including President Abdullah Gul, Erdogan and Davutoglu. The relationship has transpired in spite of both hidden and blatant pressures exerted by Washington and Tel Aviv.

The “moderate” Turkish position between Fatah and Hamas has brought the disparate Palestinian factions together, out of their shared need for Turkey. If Ankara made Hamas receptive to it as a “caretaker” both regionally and internationally, because of its helpfulness and its efforts to push the West to accept Hamas, it is partly the realization of Fatah’s desires to politically “domesticate” Hamas and bring it into the political process, however carefully. No one but the Turks is capable of taking on this role for the foreseeable future.

In a forward-looking reading of the situation, the Turkish position on the Palestinian issue will face a series of problematic obstacles, foremost among them the Palestinian division. In partnership with the Egyptians, Turkey will try to bring together the Palestinian factions into a single trajectory to put an end to the division that has stalled Turkey’s policies on the Palestinian cause.

The current poor state of Turkish-Israeli relations further hinders this position, given Iran’s regional stance that it would not stand by while Turkey tries to support the Palestinians in a way that contradicts Iran’s vision. The US and Europe also worry that Turkey will overstep the line of “acceptability,” taking on roles that conflict with Western interests in the region. It seems that Turkey has stirred up Arab sensitivities both before and after the recent revolutions.

In spite of these challenges, regional changes may give Turkey the chance to take an even more nurturing role in the Palestinian cause. The Turkish-Egyptian stance may replace the Syrian-Iranian role in the coming period.

The Palestinians are keen to hold onto continued official and popular Turkish support for their cause, in the hopes that they will benefit from Turkey’s international game in its support for Palestine.