Egypt and the Rewriting of Mubarak 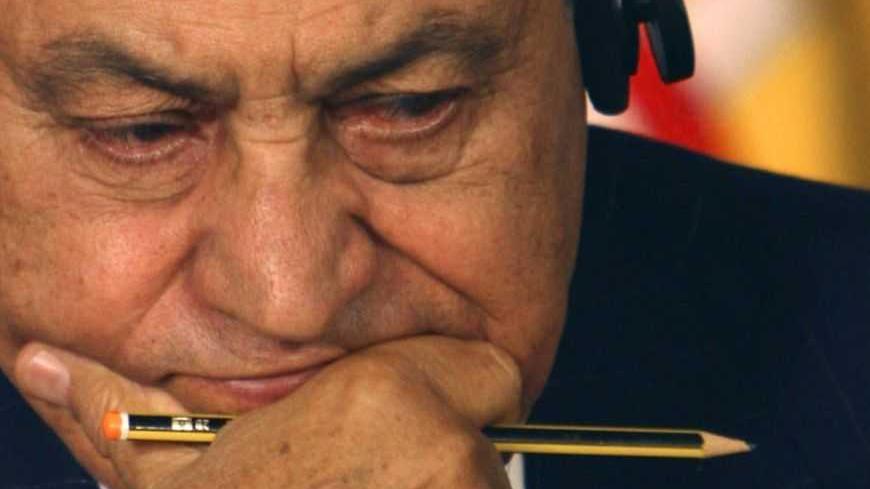 I could not believe my eyes, but he was actually crying. The man, whom I had closely known for more than a decade, had been sitting alone for the past hour watching videos of Hosni Mubarak and his speeches in melancholy and, eventually, tearing up.

I had seen him on several occasions over the years watching the more famous speeches of former presidents Gamal Abdel Nasser and Anwar Sadat on his decaying yet unchanging laptop, as quite a few do. But he always seemed to view Mubarak as nothing more than a placeholder rather than a successor to that lineage of (mostly) celebrated Egyptian leaders. What’s more, this is possibly the 10th day in a row he has done this before my eyes. His interest in politics as well has generally been nothing noteworthy over the years. And though he was not particularly supportive of the January revolution when it began, he had wholly joined the national euphoria and excitement that ensued in the few months after February 2011, like many had. He had come back then eventually to the conclusion that the revolution was a good and necessary thing, and that “Mubarak brought it upon himself” as he had said in his own words, and that “it didn’t have to be this way.” Today, however, he sees the loss of Mubarak as the worst thing to have ever happened to Egypt.

And I would like to point out, before proceeding any further, that I am not speaking here about Mubarak’s actual base of existing dedicated supporters, whose actual estimates are hard to pinpoint. Rather, my focus is mainly on the wider set of people whose opinions were never fully aligned with one particular political group or direction all along: those who are likely to be swing voters.

I, of course, cannot speak with any statistical data on how substantial or significant in size it all might or might not be, as there no polls (yet?) on the subject of Mubarak’s popularity and perception. But on a personal observation level, the amount of people who are beginning to look at Mubarak (once more) in a more positive light appears to be significantly increasing, and after many had actually grown to accept the revolution’s narrative of him as nothing more than a corrupt despot. Some have become outright Mubarak supporters who wish he, his regime, and/or at least the apparent national condition of that era could return. But seemingly more have just acquired a somewhat more sympathetic or accepting view of him.

One particular quotation from his interview with Christianne Amanpour during the revolution, which was turned into a news headline the following day, is something that I have heard and seen shared around quite a bit as of late. The summarised quotation and headline read: “I would like to leave power, but I fear my country drowning in chaos, and I fear the Brotherhood taking over power.” For some, that resonates today quite a bit.

There are mainly two broad categories of narratives that aim to whitewash Mubarak. One narrative portrays him as a good-yet-fallible man and a martyr-of-duty who worked for decades for his country as a military man and then as a public servant and president, who saw more than anyone the alleged “danger” posed by the Islamists and felt that, regrettably, no one knew how to keep the country together but him. Mubarak’s failings were a growing clinging to power despite his age, corruption around him, being increasingly uninformed or dis-informed, his wife and his younger son Gamal and their entourage, and more.

The other narrative takes a more Saddam-esque approach, accepting Mubarak as a corrupt and iron-handed autocrat whose regime was filled with all the hallmarks of a dictatorship, but as one who “might have fed himself well yet still knew how to feed and protect his people as well.” For many of those espousing that narrative, neither Morsi and the MB nor the opposition, perhaps even SCAF, appears to have any idea how to do that the way Mubarak did, whether democratically or otherwise, and are all driving the country off the cliff. Some also go a step further in that account and add once more to Mubarak the role of the protector of the country from the Islamists.

Of course, the rise of such reactionary narratives is normal soon after revolutions. It happened in Eastern Europe, it happened with Saddam, it is happening with Ben Ali in Tunisia, and Pinochet remains a divisive figure in Chile, for example. One reason is often how the turmoil experienced by post-revolution countries increases the difficulties and the sensations of uncertainty and instability experienced by many, with the latter two often being characteristically absent in authoritarian regimes, whether due to a tightly-controlled reality or blinding state propaganda, if not both. The second reason is that opposition propaganda, as disorganised as it usually is before it reaches any power, often tries to prominently highlight the negativities of a regime or its associated national condition as well as underplay any of its acceptable products in order to increase public opposition it.

Once the previous dust settles and turmoil begins within the new transition, a less black image of the past inevitably re-emerges, reminding people of some of the reasons (such as the perception of “stability”) why they had not risen up before against the autocratic regime. And in the midst of post-revolution or transitional upheaval, any perceived positivities of the former regime also appear much exaggerated and much larger than they actually ever were.

In addition, the current state of the country has been quite worrying and exasperating for many. The economy and security are suffering, protests are unending, and none of the current political forces seem to have an idea on what to do with or for the country, with many people appear to be increasingly losing faith in all sides. There is a growing noticeable presence within the public sphere of extremist or ultra-conservative discourse, Islamists are dominating the ballot boxes due to their organisation and rural presence, and the “Ikhwanisation” of the state is seen by many as a real threat. The new constitution is a source of major conflict, the country is bitterly divided, and there is a strong concern by many over the shape of Egypt and its more diverse and open culture over the coming years.

But facts remain facts. While under Mubarak GDP was perhaps briskly growing, Tourism was booming, security was better and the state was in some ways set against extremism, Egypt was a police state where torture, abuse and illegal detentions and surveillance were widespread. Media was on a varying leash, immense corruption was rampant, elections were brazenly rigged, and the rise of any real or substantial political competition was being actively choked by the regime using any means necessary, leaving instead some decorative parties to complete the faux-democracy picture. Civil society, furthermore, was cornered in many ways, leading to painful results for a country in sore need of a vibrant civil society. Even economically, growth never really trickled down the way it was intended to, social injustice and the gap between the rich and the poor were growing at least as fast as the economy was, and random housing and shantytowns were becoming immensely prevalent. The list of grievances goes on and on.

The most regrettable fact, however, is that post-revolution Egypt doesn’t seem anymore to be surely on a path towards improvement. Nonetheless, it’s very hard to assume that the previous regime and the manner with which it conducted its business could return. Most of its figures have politically expired or are facing legal challenges, the country itself and national culture have profoundly transformed, and Islamists have become a integral part of the political spectrum, among other reasons. But if lessons are to be learned from the eventual fate of Ukraine’s Orange Revolution as well as from the very small margin with which Morsi won the presidential elections, the past could always make some sort of a return, albeit with some new faces, and a new evolved form.