Arming the Syrian Opposition Is No Solution

Controlling the spread of arms may not be possible if the only solution to end the bloodshed in Syria is by arming the opposition, writes Tulin Daloglu. 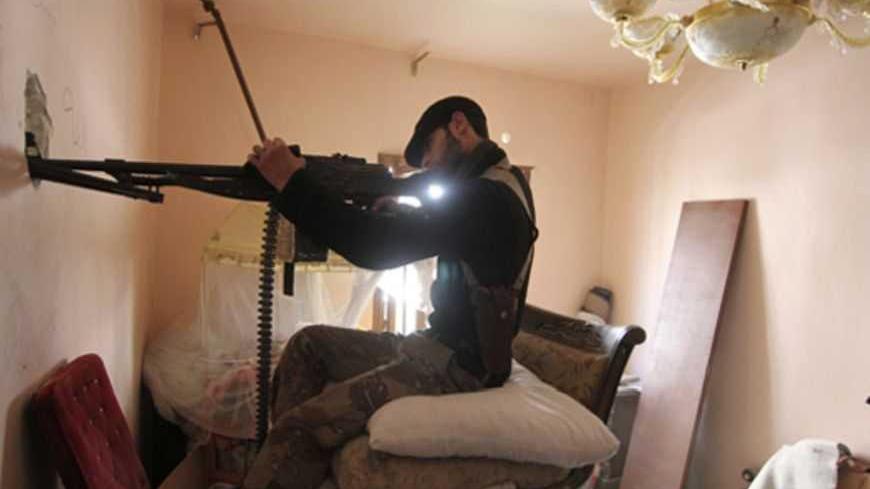 A Free Syrian Army fighter takes position inside a room as he points his weapon through a hole in Aleppo's Saif al-Dawla district, March 20, 2013. - REUTERS/Giath Taha

No one seems to have a clear road map as to how to end the bloodshed in Syria. Just a quick recap to what happened in the past week is enough to illustrate how the international community has been unable to find a solution. The Arab League decided to arm the Syrian rebels on Tuesday [March 26], but the New York Times revealed two days earlier on Sunday that Turkey and the Arab governments had already been sending arms to the rebels with the blessings of the US for the past year — despite the White House statements claiming that they are against providing lethal weapons to the rebels. In the meantime, during an informal meeting [March 22] discussing how to bring an end to the Bashar al-Assad regime, 25 of the 27 foreign ministers of EU member countries remained opposed to the proposal by France and the UK to lift sanctions and allow arms delivery to the Syrian rebels, while Russia insisted on a politically negotiated settlement to see through this crisis.

There is no breaking news in the New York Times article except that it provides some concrete information on how these weapons have been transferred to the bleeding Syrian theatre. “The airlift, which began on a small scale in early 2012 and continued intermittently through last fall, expanded into a steady and much heavier flow late last year, the [air traffic] data shows,” the article reads. “It has grown to include more than 160 military cargo flights by Jordanian, Saudi and Qatari military-style cargo planes landing at Esenboga Airport near Ankara, and, to a lesser degree, at other Turkish and Jordanian airports.”

Demanding to oust Assad from power, the Erdogan government did all it could to get Russia on its side, but failed. Although they decided to play down the incident, Turkey forced a Syria-bound passenger plane to land at Esenboga Airport in October 2012, claiming that it was carrying military supplies to Damascus. After a cold spell in political relations, Moscow and Ankara decided not to make a big deal out of it.

No doubt that the Assad regime has heavier weapons and a fully equipped army, which cannot be compared to what the opposition has. A Syrian opposition fighter sheds doubt on whether the devastation would be so massive now if they had not taken up arms against the regime. “We gave them the excuse to kill us,” he said.

All parties involved are evidently closely monitoring the other parties' moves, and none can really claim any moral high ground that theirs is a better way forward, including Turkey. Turkish Prime Minister Recep Tayyip Erdogan is right to divorce Assad as a close ally, but it must also be clear that saying the right things has not helped to save lives on the ground. Speaking at the Arab League summit in Doha, recently resigned leader of the Syrian Coalition, Ahmad Moaz al-Khatib, said that more than 100,000 people have already died in Syria since the uprising started and more than a million have seeked refuge in neighboring countries.

“Entering its third year, the struggle has led to devastation costing $100 billion. Such figures have not been seen in the Levant since the Mongol invasion in the 14th century,” Amir Taheri, an Iranian born Middle East analyst wrote in the Times of London on March 29. “Syria’s three wars against Israel displaced about 60,000 people and cost the lives of fewer than 3,000 Syrians.”

The point is, acquiring arms is never an issue in the Middle East — when people need them, they find them one way or the other. But for the Arab League, which is also directly responsible for the suffering of the people in this region, it shows once again what poor judgment they have in honoring lives. Their decision would not mean dumping their old stockpiles of weapons into the Syrian theatre while they replenish theirs with new purchases from mainly the US. The longer the Syrian civil war goes on, and the arms continue to flow into its theatre, one thing will become clear very soon. It will not be possible to control where these arms go, and whether there will be any kind of peace and calm in Syria in the near future.

There are talks about establishing peace enforcement or peacekeeping forces in and around Syria whether through the approval of the UN Security Council, NATO or individual countries. Everything at hand carries a number of risks, and there are really no good options for moving ahead. But it is about time for the international community to come up with a better idea than providing arms to the Syrian rebels to end this crisis, and accept direct dialog with Tehran and Moscow to find a settlement agreement. Otherwise, today’s dead body count will only increase.

Tulin Daloglu is a columnist for Al-Monitor's Turkey Pulse. She has written extensively for various Turkish and American publications, including The New York Times, International Herald Tribune, The Middle East Times, Foreign Policy, The Daily Star (Lebanon) and the SAIS Turkey Analyst Report. She also had a regular column in The Washington Times for almost four years.