In an interview with Mustafa al-Kadhimi, Iraqi National Security Adviser Faleh al-Fayad describes the intricate regional and internal factors affecting his job, and what the future holds for Iraq’s national security. 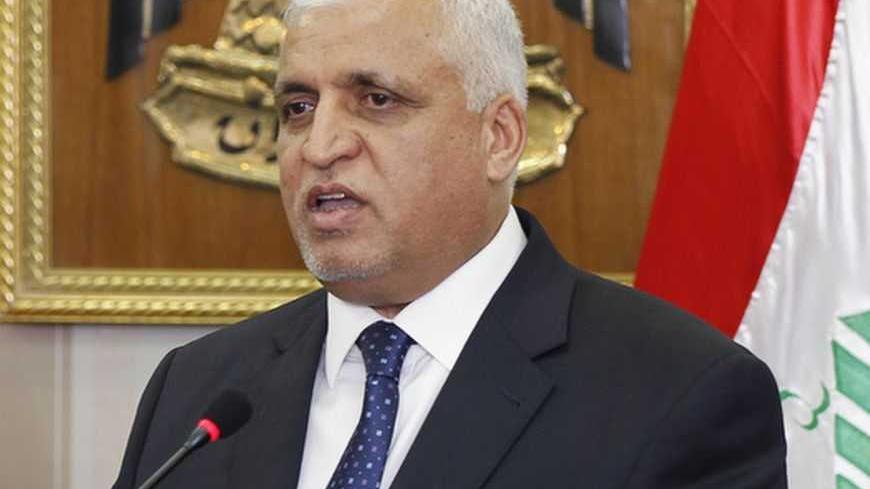 Faleh al-Fayad, the Iraqi national-security adviser, believes that 2013 will be the year that the Strategic Framework Agreement will be fully implemented, saying that US President Barack Obama’s re-election will further stabilize cooperation efforts between Iraq and the United States.

As national-security adviser, Fayad’s purview encompasses burdensome issues related to security and untangling the complex network of threads that connect emergent terrorist groups with the unfolding events in the Middle East, all while staying afloat in Iraq’s tumultuous political scene. Fayad is the second most prominent figure in the National Reform Movement led by former Prime Minister Ibrahim al-Jaafari. He played a large role in forging the Shiite-dominated National Alliance, which presently governs Iraq, and he was also one of the drafters of the Iraqi constitution that was ratified in 2005.

Regarding Iraq’s internal security, Faleh al-Fayad said that the Iraqi army has complete control over the security situation following the American withdrawal. However, he admitted that improvements are still needed regarding technical issues in the intelligence apparatus.

Fayad revealed to Al-Monitor that the Iraqi army is not qualified to maintain order in the cities because it is unsuited to carrying out such duties.

On Iraq’s relationship with the Arab Spring countries, Fayad explained that Iraq’s foreign policy is still in the works and that the fluid situations in these countries prevents Iraq from forging a stable approach to foreign policy.

As for Syria, Fayad said that the events in Syria have taken on a sectarian dimension which will in turn have an acute effect upon Iraq due to its own diverse sectarian composition. He added that the recent protests in Iraq are a clear example of spillover from Syria.

Below is the text of the interview.

Al-Monitor:  Violence has been on the rise in Iraq, and many have criticized the performance of the security institutions. How do you perceive the security situation in Iraq?

Fayad:  The violence has been sporadic, yes, but that does not mean it has been escalating at a steady rate. The security apparatus has been reinforced as of late, but the political situation and foreign factors have increased the country’s exposure to terrorist attacks. In the past two months there have been a few security setbacks. Yet, overall, Iraqi forces have managed to fulfill their duties and maintain control over the security situation since the withdrawal of US forces.

Nevertheless, there are some structural weaknesses in the intelligence apparatus. As of now, the army is enforcing law and order. This is not what the army was built for, and thus it is causing some problems among citizens and various state institutions. I believe that the problem can be attributed to three causes. The first cause is the rise of terrorist activity in the country, which in turn can be traced back to the terrorist safe havens that were created by the situation in Syria and the turmoil in some of the Arab Spring countries. The second cause is that the Iraqi security apparatus still suffers from the technical void left behind by the Americans. The third cause is that the Iraqi army is unprepared to comprehensively and smoothly fulfill all of its security duties. It is maintaining security, but in a slapdash manner that can cause more problems for the country.

Al-Monitor:  Some have leveled criticism at Iraq for improving its relations with the regimes of the Arab Spring — some of them Islamist — fearing that this could negatively affect internal security. What is your take on this?

Fayad:  The Arab Spring is still unfolding and changing, and so too is the manner in which we interact with the countries of the Arab Spring. For instance, in Libya, former president Moammar Gadhafi opposed the Iraqi state for several reasons, one of which was the presence of foreign forces. After Gadhafi, Salafist militias and Islamist extremists have risen to the fore and oppose Iraq for sectarian reasons. Thus, our issues with post-Gahdafi Libya are different from what they were during Gadhafi’s reign.

As for Egypt, it is the largest Arab country and has yet to achieve the desired level of stability and the new identity which it seeks. We are reticent in our interactions with Egyptian institutions because we are not certain about the nature of the regime or the inclinations of the individuals heading the Egyptian government. This is a delicate matter for the Iraqi government.

Syria is the most important. It is Iraq’s view that the lack of a functioning democratic government in Syria was what forced the people into popular rebellion, and other foreign parties share this view. Terrorist activity has also taken its toll and impacted Iraq’s stance vis-à-vis Syria.

Al-Monitor:  In what ways do you expect Syria will change, and what impact will this have on Iraqi national security?

Fayad:  The situation in Syria is obviously affecting its neighboring countries, especially Iraq. The events in Syria have taken on a sectarian dimension, which will certainly influence Iraq due to the country’s diverse sectarian composition. Moreover, the recent protests in Iraq are a strong example of spillover from Syria. We are concerned that the divisiveness in Syria might affect the unity of Iraq.

Fayad:  Yes, there is an absolute lack of security coordination between the countries of the region, apart from certain places and American efforts. One scarcely finds systematic coordination between the countries affected by these groups. Unfortunately, some countries provide extremist groups with support so as to further their agendas in other countries. This clearly goes against the principle of coordinating to fight these groups. For instance, transporting militants into Syria has been facilitated, with many coming from Arab countries by way of Turkey. There is a lack of earnest work being done to combat terrorism in the region.

Al-Monitor:  What about Iraq’s foreign policy? Have diplomatic efforts helped national security in any way?

Fayad:  I was not aware that Iraq had a foreign policy. Political and social strife, a weak national identity and disunity still influence Iraq’s representatives abroad. With all due respect to the Iraqi Ministry of Foreign Affairs, we have yet to craft a political policy that reflects the identity of the new Iraq. No single strategy is capable of reconciling divergent points of view, burying the hatchet between rival groups and resolving the aforementioned problems. The routine performance of the political system has not worked wonders, nor has it indicated that it has the capacity to resolve problems. Another factor is the fact that the administration is preoccupied with domestic issues and internal security, which in itself is a serious structural flaw.

Al-Monitor:  Does the danger of a nuclear Iran weigh heavily on Iraq? The whole world fears the Iranian nuclear program; why, then, does Iraq seem reassured, despite the fact that it shares a border with Iran?

Fayad:  Proximity to Iran is irrelevant in this matter. Honestly, we have bigger fish to fry which are closer to us than Iran, such as addressing daily infiltrations and bombings. We may not be immune to strategic threats abroad, but these are not the primary concerns of the Iraqi people. As far as the Iraqi government is concerned, Iran is a neighboring country whose common border stretches for more than 1,000 km and has sectarian pull.

Iraq seeks to advance its own interests by establishing good relations with Iran and other countries. But, frankly it does not sense the danger of Iran going nuclear. What we do sense, however, is Turkey meddling in Iraqi affairs and the Arab countries sending militias and armed groups into Iraq, in addition to their refusal to politically engage with Iraq.

Iraq rejects producing nuclear weapons and believes that proliferation across the region would only compound its problems. This includes every country that has the potential to possess such weapons. I do not believe that these weapons aid the countries that have them — take Pakistan, for example. It possesses nuclear weapons, yet it still struggles to cope with the many threats it faces.

Al-Monitor:  Has the Strategic Framework Agreement with the US been implemented especially in regards to issues of security and armament? And why has the delivery of the F-16 aircrafts been delayed?

Fayad:  The Strategic Framework Agreement between the US and Iraq is proceeding according to plan. However, the first year of the agreement was more of a litmus test for the intentions and preparedness of both sides.

Iraq cares about its relationship with the US and it has managed to keep its commitments regarding the security of the American Embassy, its consultants and its general interests in Iraq. The US has also upheld its side of the deal, having formed a security-coordination office and other means for bilateral cooperation. Moreover, the committees formed in light of the agreement have held important meetings that will help the relationship develop into the future.

I believe that 2013 will be the year that the agreement will be implemented, given that the terms of cooperation have been set and the new administration taking office in the White House. Here, I would like to note that Iraq was waiting for the results of the US presidential elections to see if a policy platform different from Obama’s would come to power. US foreign policy towards Iraq has been relatively stable. That is why I personally think that this year is the actual year for the implementation of the Strategic Framework Agreement.