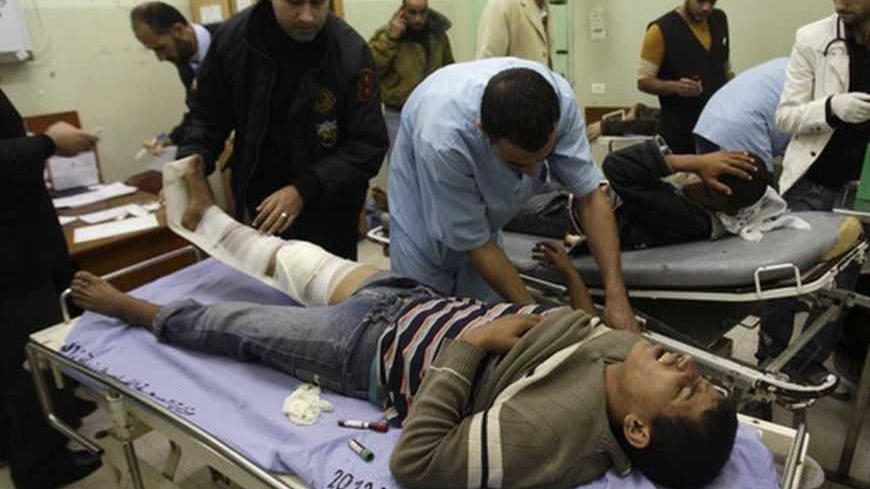 A wounded Palestinian is treated at a hospital in Khan Younis in the southern Gaza Strip, Nov. 23, 2012. - REUTERS/ Ibraheem Abu Mustafa

Kuwait, the United Arab Emirates and Jordan have hospitals in Gaza.

In the heart of Rafah city in southern Gaza Strip, Abdelaty al-Mozayen, medical chief of the Kuwaiti hospital, starts his daily work by following up on the various divisions of the hospital. The two-story hospital was established with Kuwaiti funds in 2007 and located in the Tal al-Sultan neighborhood. It is but one of a number of hospitals setup by friendly Islamic nations to help the Strip’s medical sector, which has been crippled by a five-year Israeli siege.

"This hospital was founded by the Kuwaiti International Rahma Society back in 2007. It is considered to be a non-governmental medical center that provides various medical services to almost all of the population in the Rafah area including Tal al-Sultan, Ashaboura, Downtown and the border areas with Egypt. Since it has been established it has been working around the clock for symbolic fees collected from our local clients,” al-Mozayen told Al-Monitor.

The Kuwaiti hospital offers a number of specialized services, including maternity care for pregnant women on the verge of delivery, some moderate surgical operations like removing appendices, and treating the injured during conflicts with Israel. The hospital also has a fully equipped laboratory, blood bank, dental clinic, pediatric clinic, delivery theater and an X-ray room with ultrasound equipment.

"One of the most important services we offer is the delivery service for pregnant women. Every month, we manage to help deliver 120 babies, but we lack an incubator for newly-born babies," al-Mozayen said.

The hospital has also been equipped to deal with conflict, with an emergency and admission department on the ground floor to receive an influx of casualties during times of violence, or if a border tunnel collapses nearby in Rafah.

"We have our own on-duty medical staff that work around the clock, within two shifts, day and night. In times of Israeli attacks, for example, we receive casualties and manage to aid them properly based on our capabilities. Our blood bank is capable, and we also have two operating theaters,” al-Mozayen explained.

The Kuwaiti hospital has plans for further development pending the availability of more funds.

"We are a semi-charity and all of our funds and running costs are covered by the Rahma society. For the past few years, we have been able to provide some good services for our clients, including ultrasound ray. But still, we lack some advanced equipment, for example, something that could help us detect breast cancer early on. This is really needed considering that we deal with dozens of pregnant women on a monthly basis,” he said.

The hospital also strives to provide medicines at low prices for the population in Rafah.

"Unfortunately, for the past two years, we have suffered a notable shortage of medicines like painkillers and antibiotics. Our prices are 20 percent less than those outside of the hospital,” Samir alhems, chief of the hospital's drugstore, told Al-Monitor.

A long queue of mainly women waits in front of the dental clinic. Manal Alhamayda, a middle-aged woman, lauded the hospital’s services, adding that she felt “more comfortable [here] than in any other hospital.”

"This is our second visit here, but although their services are good, we have to wait a long time for our turn. We have been waiting here for several hours and, as you can see, there are quite a lot of people waiting.”

Throughout the Gaza Strip, similar hospitals have been established with the aid of funds from Islamic countries.

Also in Rafah, a government-run hospital was founded and equipped by the UAE-based Red Crescent Society. There is also a Jordanian hospital that has been running mainly by Jordanian staff and Jordanian government funds since 2009.

According to the hospitals administration within the Gaza health ministry, there are two other similar hospitals currently under construction: an Indonesian and Yemeni hospital. The Indonesian hospital will be located in northern Gaza.

Mohammad al-Kashef, director general of international cooperation with the health ministry, said that his department has been very cooperative with parties wanting to provide support for the local health sector.

"We have had no problem with any country wanting to establish a hospital here and name it after itself. This is a protocol that also exists in other countries and, we in Gaza, are pleased to offer these hospitals all the requirements for their success across the Gaza Strip," al-Kashef said.

Internationally established hospitals are a new phenomenon in Gaza that has emerged in recent years as part of the struggle to alleviate the suffering caused by Israel’s siege.