Terrorist Attack at USEmbassy in Turkey

Tulin Daloglu reports from the scene of a suicide bombing at the US Embassy in Ankara. 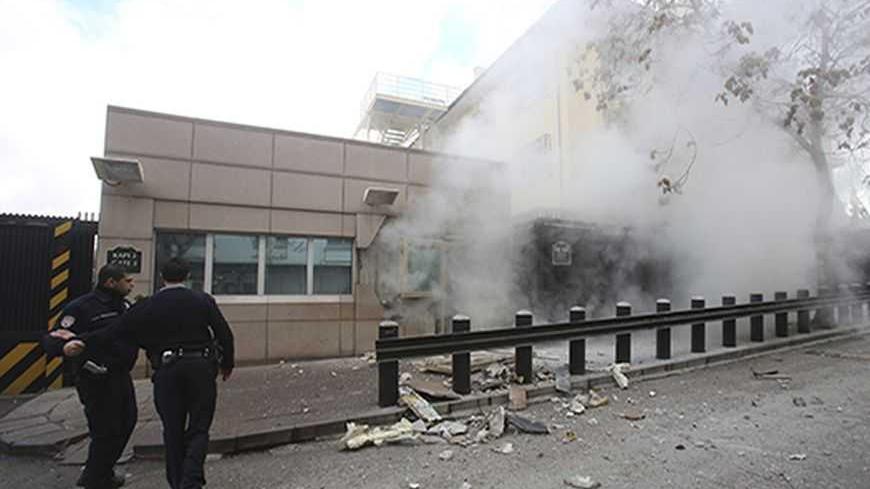 Turkish police officers react after an explosion at the entrance of the U.S. Embassy in Ankara February 1, 2013 - REUTERS/Yavuz Ozden/Milliyet Daily Newspaper

Turkish authorities believe the attacker to be Ecevit Sanli, a 30-year-old member of the Revolutionary People’s Liberation Party/Front (DHKP/C), an extremist leftist organization. Sanli was reported to have been detained in 1997. Officials do not yet know why the group targeted the embassy.

Turkish Prime Minister Recep Tayyip Erdogan condemned the attack, reasserting that his government would not yield in the fight against terror. “The attack aimed to disturb Turkey’s “peace and prosperity” and demonstrated a need for international cooperation against terroris,” Erdogan said.

Foreign Minister Ahmet Davutoglu offered his thoughts, stating, “We are saddened that such an attack happened in our country.” He went on to say that, “Turkey will spare no effort in protecting diplomatic facilities…We have always shown great sensitivity to the protection of foreign missions and we will continue to do so.”

Muammer Guler, minister of the interior, told journalists, “The state prosecutor is on top of this case, as well as bomb squads, and a detailed investigation is ongoing.”

U.S. State Department spokesperson Victoria Nuland said in a written statement, “We are working closely with the Turkish national police to make a full assessment of the damage and the casualties, and to begin an investigation. We will share more information as it becomes available.”

Ankara Governor Alaaddin Yuksel revealed that the attack had occurred inside a security entrance. Shortly after the blast, he visited the embassy, where he met with Ambassador Francis J. Ricciardone Jr.

Speaking outside the main gate of the compound, Ricciardone told reporters that Turkey and the United States have both suffered greatly from terror attacks and that “such acts only make us more determined to increase our cooperation against terrorism.”

“We have received hundreds of text messages, and we know we are amongst friends here, and we feel safe,” Ricciardone added. “We are now very sad of course that we lost one of our Turkish guards at the gate.”

When Al-Monitor arrived at the scene, police had already cordoned off the area of the blast. A police officer who asked not to be identified told Al-Monitor that the explosive used was powerful enough that it brought down the marble walls lining the entrance of the security area.

Guler Gurcan, who lives near the compound, told Al-Monitor, “Our walls trembled. I felt our organs shake. It was a very strong explosion, and we immediately understood something had happened at the U.S. Embassy.”

After news of the attack broke, traffic was blocked around the embassy, which is off Atatürk Bulvari, one of downtown Ankara’s main thoroughfares. People at the scene looked stunned, and journalists outside the cordon waited in silence.

Among the injured is Didem Tuncay, a former diplomatic correspondent for NTV, who had gone to the embassy to apply for a visa. Minister Guler said Tuncay is being treated at the hospital for an eye injury and that her life is not in danger.

Hours after the explosion, the scene remained crowded with Turkish police, and security had been visibly heightened in the vicinity of the embassy compound.

More details are emerging about DHKP-C, an extremist Marxist, anti-Imperialist terror group that is believed to have carried out the bombing.  A former American official tells Al-Monitor that "DHKP-C has actually committed some murders of US servicemen and an insurance agent during, and after, the First Gulf War. There was a schism in the organization in the mid - 1990s and after that. Their tradecraft was reportedly excellent, one of the better terror groups of their time."

Tulin Daloglu is a columnist for Al-Monitor's Turkey Pulse. She has written extensively for various Turkish and American publications, including The New York Times, International Herald Tribune, The Middle East Times, Foreign Policy, The Daily Star (Lebanon) and the SAIS Turkey Analyst Report. She also had a regular column at The Washington Times for almost four years. She tweets from @TurkeyPulse.