Plenty of hugs and kisses were exchanged on the first day of the newly sworn-in Knesset, yet the gaiety will be short lived as the battles will soon commence, writes Mazal Mualem. 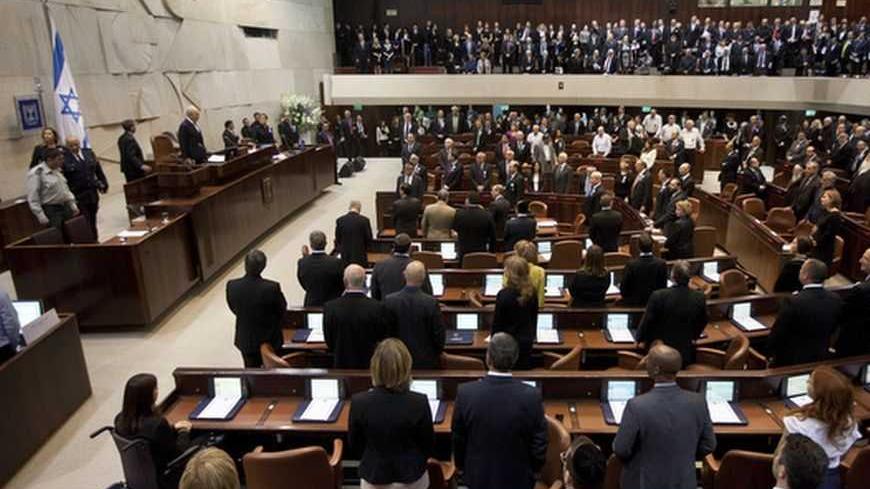 Many young faces — that's what gets your attention when you look at the 120 Knesset Members who, jubilant and excited, took their seats at the plenary hall on the first day of the 19th Knesset. Accompanied by their children, parents, spouses and grandparents, the newly-elect Knesset Members arrived at the parliament, where they hugged, kissed, shook hands and swore allegiance to the Knesset.

Here they are, Stav Shaffir and Itzik Shmuli, the heroes of last year's social protest. She is 27 years old, the youngest Knesset member, in a lovely dress. He is 32, wearing a suit and tie. A year and a half after becoming icons of the social protest, they are being sworn in as Knesset Members on the Labor Party ticket. At the moment it seems that they will serve from the opposition, as will Hilik Bar and Michal Biran from their faction, also both new Knesset members in their thirties.

The centrist Yesh Atid Party and the right-wing Habayit Hayehudi Party also sported a young look in the form of many new Knesset members — most of whom had to repeatedly identify themselves to Knesset ushers, who, will have to memorize the faces of no fewer than 48 new parliament members.

The rejuvenation of the Knesset is undoubtedly one of the outcomes of the social protest that killed the splintered, functionary-based Kadima Party, helping to build Yair Lapid's Yesh Atid party, which promised — and delivered — a politician-free party. Lapid handpicked a mixed bag of Ethiopians, mayors, academics, social activists, a former Shin Bet director, two rabbis and close personal friends such as journalist Ofer Shelah and judoka Yoel Razvozov.

Undoubtedly, the Yesh Atid slate is the most intriguing one because of its many new faces, as well as the tightlipped conduct championed by its chairman Lapid. For example, since the election and until last night (Feb. 4), the newly-elected MKs were prohibited from giving interviews to the media, and they obeyed. It would be interesting to see how Lapid handles signs of emerging independence by those he helped get elected. Knesset life is conducive to many such trials.

Meanwhile, Lapid appears to be investing quality time in his new ally, the chairman of the Habayit Hayehudi Party, Knesset Member Naftali Bennett. It's hard to overlook the chemistry between the two young chairmen who were the stars of the last election campaign. Their warm embraces and whispering in front of the cameras indicate that a new political power house is emerging before our eyes, one which has already started collaborating in a bid to prevent the Ultra-Orthodox Sephardic Shas Party from joining the government.

Two days ago they met at a private home in Tel Aviv to coordinate positions, and it seems that many feats are ahead of them. This is a fascinating combination. It is at least as fascinating as the hyped friendship between Haim Ramon and Knesset Member Aryeh Deri in the 1990s. All indications suggest that the Bennett-Lapid duo has the potential to champion a historic change in terms of sharing the burden.

This is a young, savvy "power couple" that at the moment serves as Benjamin Netanyahu's private headache. The prime minister — accompanied by Ms. Netanyahu, who wore a ballyhooed see-through black lace dress — gave Lapid a warm embrace, while giving Bennett a rather cold handshake. It is possible, however, that President Barack Obama's visit and his explicit message about the importance of diplomatic negotiations and the coalition required might dent the idyllic relationship fostered between Bennett and Lapid.

Either way, in view of these new leaders, the old-guard politicians of the Likud-Beiteinu and Shas parties seemed like old news. The Likud-Beiteinu had only one new Knesset member to show for: the ultra-right Moshe Feiglin. As for Shas, the slate remained almost unaltered — this is what change looks like.

The changed Knesset was evident in the smiling face of the defense minister of the last six years — Ehud Barak — who started his term in the previous Knesset as chairman of the Labor Party and ended it as chairman of the Independence Party, which became defunct only two years after its formation. Barak was the second half (with Benjamin Netanyahu) of the inseparable powerful duo of the outgoing Knesset. Now the defense minister is bidding the Knesset farewell to "devote time to himself." He looked relieved.

While dozens of new Knesset members are milling about excitedly, Barak preferred to stop by at the Knesset cafeteria, maybe for the last time. At a side table he shot the breeze with Minister of the Environment (for the time being) Gilad Erdan. With childlike enthusiasm, he described the plot of the movie "Lincoln," which he had seen during his last visit to New York.

For one day —  the first and probably the last time in the term — the Knesset donned a spirit of festivity and good will. Even the grandiose departure of Knesset Member Haneen Zoabi (Balad Party) from the plenary hall in order to avoid singing the national anthem did not put a damper on the mood. (Knesset Member Ahmad Tibi, who went as well, showed that you can do so quietly). We've simply grown accustomed to that.