15 Things Egypt Must Do To Step Back From the Brink

Bassem Sabry recommends how Egypt can de-escalate the current crisis. 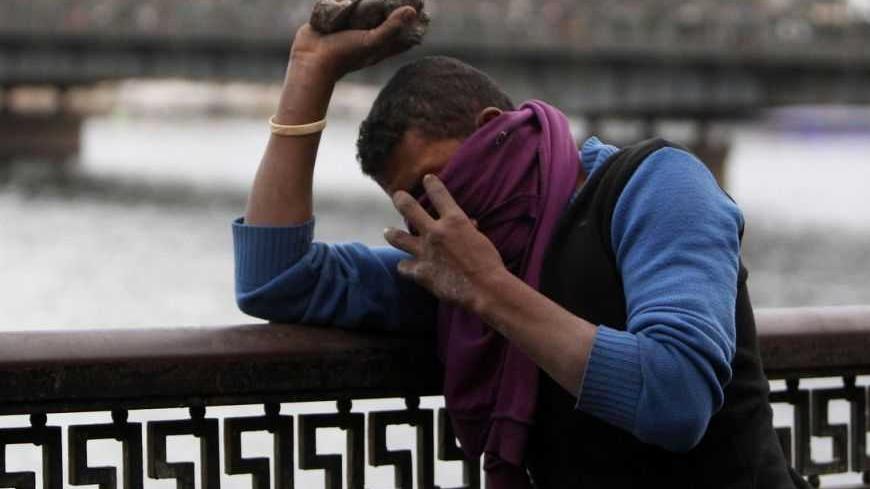 CAIRO — Nearly 40 Egyptians have died in clashes with security forces over the last few days, and more than 1,100 have been injured, according to official figures as of this writing. Three cities have been declared in a state of emergency and under curfew, protests continue in many parts of the country (the peak of which occurred around the second anniversary of the Jan. 25 revolution), clashes with the police continue, and the army has mobilized. Radical groups have appeared on the scene, including an anarchist-leaning group called “The Black Bloc” that made its presence quite visible.

A beleaguered President Mohammed Morsi has called for national dialogue during a speech in which he seemed shaky and exhausted, despite efforts to look defiant. The opposition has controversially refused to attend a dialogue without clear agenda - as they put it - and lacking in seriousness and commitment, and has set what some claim as too-difficult conditions for participating in dialogue, though still welcoming dialogue in principle.

In part, it’s troubling that these headlines no longer carry the shock value they should have.

Setting aside any positive elements of what might be happening in the Egyptian scene (such as more people feeling emboldened), it’s clear that the country cannot sustain its current course. Some radical moves and political courage need to manifest.

The country is in a state of deep trouble economically and socially, its once united revolution is divided upon itself with growing animosity on both sides, relatively more people (particularly youth) are becoming radicalized, and hopes for economic recovery and democratic progress are genuinely suffering two years after the revolution.

If the country’s political forces wish to attempt what could be a last minute miracle to save the promise of the Egyptian revolution and somewhat unite a painfully divided country, there are several steps that need to be taken. Here are some of them:

1. Restructure the police, fix the public’s relationship with them: The relationship between Egyptians and the police is possibly at its all-time low. The institution’s reputation had been incredibly tarnished since the days of Mubarak. In addition, almost all trials of protester murders and injuries since the revolution have ended with the acquittal of the police, causing outrage for many as well as successive violent clashes between protesters and the police. Abusive behavior and police brutality have also remained facts, despite areas and interludes of improvement. On one hand, Egypt now has an ineffective police force that sometimes has been afraid to use force when it could be justified in fear of backlash, rendering the general public angry at it for perceived shakiness. On the other, it's also loathed by the revolutionary street for continuing to be corrupt, abusive and seemingly protected from justice and for using excessive violence against civilians and protesters when it was not supposed to. Unless independent and trustworthy civilian watchdog elements are introduced into the management of the ministry, a significant non-partisan restructuring effort takes place, and a general feeling that justice has been achieved with regards to protester deaths and injuries, the police will remain an institution under continuous fire and heat.

2. Restore confidence in the legal system: Picking up from the previous point, almost all major judicial rulings with national significance since the revolution have been hotly disputed as potentially politicized and lacking in trustworthiness, including the trials of Mubarak, former regime figures, police trials, re-nationalization of companies, the NGO trial, and the increasing phenomenon of trial delays. Furthermore, the judicial corps has become in a more controversial spot now that the Judges Association has been taking a political role as of late, often in defiance of the presidency. As a result, much of the judiciary has substantially moved — partially by force of necessity — into becoming a political actor rather than an objective arbitrator. Wide national confidence has to be restored in the judiciary and its neutrality, and the first step would be for the president’s hand-picked prosecutor-general to leave office (as per the popular demand of even most of the prosecution corps itself). This would then be followed by ensuring sufficient transparency of major trials as well as a serious overhaul of the legal code.

3. Properly and transparently investigate recent violence: Successive rounds of postrevolution violence that have left scores dead or severely injured have been left without satisfying, transparent investigations. Egyptians have demonstrated more than once as of late they won’t let crimes go unpunished, and it's time authorities got the message. Whoever is responsible, no matter who he is, must be brought to justice.

4. Address the divide on the constitution: Besides its deeply controversial articles, the manner in which Egypt’s Constitution was drafted and rushed into referendum, including the national crisis involving the November Constitutional Declaration by the president, have deeply divided the country until today, and left a big percentage of it feeling that the country was being hijacked by a new regime of authoritarian intent. It also left more people feeling uninterested in the political process (low turnout in the referendum was a key indication.) The Islamists and the opposition need to achieve some sufficiently detailed immediate agreement on how to address their disagreements on the constitution and turn the document into one of sufficient national consensus. Unity on the new constitution is a key to getting the country on its feet.

5. Appoint a better, consensus-building government: The simple fact is the Qandil government has been unsuccessful. It has failed to be sufficiently transparent or consultative, has been shaky and hesitant too many times, and is generally failing to turn the country around or inspire confidence locally and internationally (although I recognize how local events are making its work harder). A new national consensus government is needed. If that government appears good enough, the approaching new parliament could keep it in power. A consensus government would also help Morsi and the Muslim Brotherhood in denying the opposition the capability of fully blaming them for what is going wrong in the country, and might help turn their image around a bit before the elections.

6. Establish a widely accepted electoral law and process: The next electoral law needs wide national consensus, no matter how long it takes. The process for supervising the elections and dealing with its violations has to be strong, neutral, well-monitored, trusted and have the power to enact punishment when it has to, which has not been the case.

7. Allow for a strong opposition: A political balance-of-power in this phase of Egypt’s history would do good for the country and in the establishment of a democratic culture in general, and especially within state institutions.The opposition continues to lack an attractive message and detailed alternatives to the policies it opposes. And the fact is that while many are increasingly angry at the Islamists, they are not necessarily growing fond of the opposition either. It’s true that the opposition has been trying to remedy its shortcomings as of late, including working together under the National Salvation Front banner and cooperating for the elections, but it needs step up its game.

9. Diffuse radicalism and sectarianism: Creating a political environment and effective mechanisms in which everyone can find accessible and peaceful mean to to after their aims and voice their grievances would be better than an environment in which more and more people feel they need to "take matters into their own hands." In addition, political groups need insist on the peacefulness of political action, avoid situations that would likely lead to clashes between their supporters (and avoid intentionally seeking them: MB members attacking the Ettihadeyya Palace sit-in was a catastrophe). Furthermore, the extent of sectarianism in Egypt — especially in the less urban areas of the country — has shown itself to be more alarming than once thought. A powerful and united national effort, with special strong involvement by Al-Azhar, needs to take place, and the rule of law needs to prevail rather than continuing to exclusively rely on informal reconciliation.

10. De-politicize Al-Azhar: While some have been happy with the relatively balanced political role that Al-Azhar has played since the revolution, the increased political and (now) legislative roles that it has played and is set to play will only mean harming the institution’s revered scholarly position and image, threatening dangerous internal rifts within it, and potentially putting it on course towards eventual clashes with either, if not both, political sides and the public.

11. Temporarily avoid some of the most deeply divisive issues: Both sides worry about controversial legislation, particularly of a social nature. The liberal opposition and factions of the population are generally more worried, with their fears more focused on potential conservative legislation affecting censorship, civil rights, tourism and more. A deal can be made between major political actors to agree not to bring up such heated issues for the coming parliamentary round, or at least for two years, unless there's consensus on certain reforms. Instead, focus can be made on urgent national reforms of a more technical nature (such as healthcare, development, transport, agriculture, etc.) that are less likely to start a profound conservative-liberal clash, and fixing the legacy of Mubarak on those issues will need a long time.

12. Protect the media and freedom of opinion: With heads of state media appointed by the Muslim Brotherhood-dominated Shura Council and the Muslim Brotherhood Information Minister, many have been worrying of an increasingly visible bias in their coverage and reports toward Morsi and the Brotherhood. An immediate dialogue on how to turn state media into fully neutral, independent and objective (and self-sustaining) news operations with a built-in neutrality mandate has to take place. Furthermore, archaic media crimes such as "insulting the president" continue to exist in the penal code. The body of media legislation has to be overhauled.

13. Address fears of social/political marginalization: Most particularly, women and Christian groups are worried of what they see as increasing marginalization by the Islamists. The new electoral law, for example, fails to guarantee women proper representation in parliament. The general atmosphere within the Christian community has also been more worried as of late, and reports suggest increased immigration. The president made matters worse when he reneged on a promise to appoint female and Christian VPs, before the position was eliminated altogether. He even caused the disappointment of many by failing to attend the new pope’s enthronement ceremony. The administration should make high level appointments that promote diversity without sacrificing capability, while the electoral law should give a degree of positive discrimination towards women. The last electoral law under Mubarak guaranteed women at least 64 seats out of nearly 500, while the post-revolution 2012 parliament had less than 2% women.

14. Get more youthful, fresh faces into politics: More and more fresh faces and youth should become a part of official political life, without totally neglecting the necessary role of youth groups (such as April 6th) as watchmen. To do so would require political will on the part of the government and the different political parties involved, but it would also require the involved youth figuring out an almost impossible formula to balance political realities and revolutionary puritanism.

15. Save the economy: A national consensus plan on how to save the economy, including tourism, is urgently needed as economic indicators continue to show bleeding. Political problems remain the key challenge to the economy, and a genuine reconciliation in itself would go a long way to fixing things. A consensus economic plan would be the second half of the puzzle.