Nasser Chararah considers Hezbollah's options in dealing with Syria and a potential military strike on Iran. 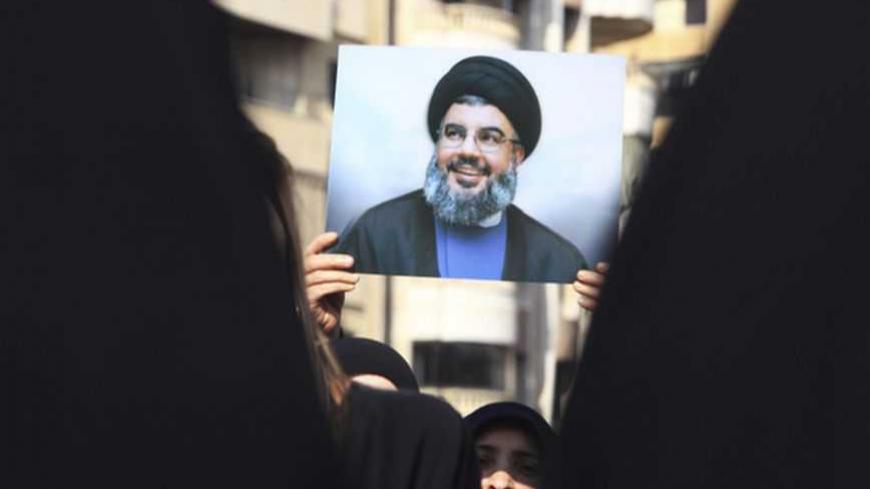 A Lebanese Hezbollah supporter carries a picture of Hezbollah leader Sayyed Hassan Nasrallah as she takes part in a ceremony marking Ashoura in Beirut's suburbs, on Nov. 25, 2012. - REUTERS/Khalil Hassan

Two valuable questions are hovering around regional and Western countries: Where would Hezbollah stand and how would it react if Assad were to depart, or if Israel or the West were to launch an attack on Iran?

Understandably, Westerners in particular do not hold a definite answer to that question. They are oblivious to the core secret of Hezbollah’s power and to the mindset of its leadership. The Shiite group is seen as secretive, casting not a single shred of light upon its structure and capabilities, while being shrilly reticent on the security and political level.

The Western impression is somehow accurate. However, the West did not provide Hezbollah with enough chances to be out in the open. Late Lebanese Prime Minister Rafik Hariri was amongst those convinced that Hezbollah should be brought to light so it could become less concealed and eventually less radical and more responsible for its own actions. Thus, Hariri encouraged bringing Hezbollah into the cabinet and the parliament.

The initiative of Hariri did not fully yield the desired result. Currently, Hezbollah is an integral part of Mikati’s government — to the extent that some observers consider it the government of Hezbollah. Nevertheless, the party has maintained its secrecy, showing to the public the less important while keeping the essential well hidden.

Hezbollah is using this lack of knowledge to its benefit, in particular the Western inability to predict the party’s reactions. As a result, psychological warfare plays a crucial role in Hezbollah’s conflict management with Israel and the West. Less than two months ago, Secretary General Hassan Nasrallah set forth the acquirement of a new missile arsenal, whose specifics were kept unannounced, in case Israel were to attack Lebanon. Nasrallah hinted that these long-range missiles could strike all of Israel’s territory, including the Negev Nuclear Power Plant.

Until this point, Hezbollah’s agenda remains cloaked, with the exception of a sole publicized plan. The party’s military strength aims at liberating the rest of the occupied Lebanese territories while standing ready to deter Israeli ambitions to seize Lebanon’s natural resources, in particular water.

Recently, Arab and Western political circles have said privately that Hezbollah may shift to offensive operations if Israel were to attack Iran or if pressures intensify over Syria that threaten the regime with demise. However, Nasrallah added during his last speech a third scenario that could incite offensive strategies: a new Israeli attack against Lebanon. Hezbollah will not be content with defense, rather it will attack the settlements near the Lebanese border.

Launching attacks against Israeli settlements is probably an exaggerated scenario that goes hand in hand with the party’s inclination to intensify psychological warfare efforts each time the Israeli threat beats the drums of a new war.

However, Hezbollah is treading a thin line between psychological warfare and real preparations for war. Those acquainted with the tactics of the party say that it continuously enhances its military powers and readiness, as if war were imminent. Yet, whether Hezbollah will launch a war against Israel — be it to save the Syrian regime or to support Iran if a Western or Israeli war is launched against it — is related to the party’s personal considerations and to the significant events that might change the current status quo.

The majority of opinions hold that it is unlikely that Hezbollah will attack Israel. In the same context, Imad Mughniyeh, whose strategic military views are still highly influential within the party even after Israel assassinated him, declared after the 2006 war: “This is the last war to take place between Hezbollah and Israel.”

Mughniyeh held the belief that the last war had settled a “balance of terror,” which deterred both parties from falling again into the trap of military fights, given the high costs of it. Nevertheless, some exceptional, weighty events might push Hezbollah to make a move, especially if Israel’s next target is Iran. The Shiite party has unbreakable ideological and military ties with Iran, also known as “the center,” and the decision on war in that concern might not solely be made by Hezbollah. The Army of the Guardians might have the upper hand since it controls and operates, according to many sources, the strategic missile arsenal of Hezbollah in Lebanon.

The decision of war is influenced as well by the fatwa, which gives the strategic decisions of Hezbollah a political and religious legitimacy. The fatwa is a juristic, religious and political concept that specifies what is permissible. The Supreme Leader of Iran, Sayyed Ali Khamenei, enjoys the privileges and rights to issue and repeal fatwas. In other words, Khamenei is the only person to decide whether or not Hezbollah shall take part in any war between Iran and Israel.

The expectations regarding Hezbollah’s stance towards the volatile political climate in Syria and Iran differ as its relationship with each country is different. Hezbollah has ideological, dogmatic ties with Iran while its relationship with Syria is that of an integrative strategic alliance. Thus, the first has more influence and deeper dimensions than the second.

A leak of information from the political backstage of Hezbollah — even though there is a shadow of doubt that it does not fully represent the party’s tacit stance — shows that the leadership sees the crisis in Syria as more dangerous than it expected. It currently believes that the crisis is long-lasting and that a decisive military victory cannot be ensured by either the regime or the opposition.

According to the source of the leaked information, Hezbollah is convinced that the crisis in Syria, if it were to remain intact, would lead to division between the main sects: Sunnis, Kurds and Alawites.

Hezbollah is still convinced at this point that the regime in Syria will not be toppled for international, regional and internal reasons. Nonetheless, the party is treading carefully due to a fear of a dramatic development of events that might lead to an unexpected loss of a strategic ally.

One such abrupt scenario is a Syrian presidential void. After such a status quo, it will be difficult to foresee the repercussions. Hence, Hezbollah has two options. The first is adopting the concept of “the fortress,” which means protecting its strongholds in Lebanon. This precautionary step will allow the party to face any tacit intentions from its rivals to exploit the collapse of its strong, strategic ally.

The second is leaving the “fortress” in order to deal with international powers. This option must be adopted in the event that Gulf and Western countries join forces to topple the Syrian regime and try to deal a similarly fatal blow to Hezbollah.

During a recent speech, Nasrallah said: “If we were attacked for disarmament purposes, we will point our weapons toward Israel and no one will be able to stop the fire that will erupt in the Middle East.” On the other hand, Iran keeps warning that any foreign attack against Syria will ignite the whole region.

In this concern, Iran and Hezbollah stand on mutual grounds. Together, they could possibly attack in case a plan is being formulated to bring about the demise of both powers in the aftermath of the overthrow of the Syrian Regime.

In between these two options, an opinion is lingering within Hezbollah that believes that the party is able to “adapt” to any new regime in Syria. It is seen that the new ruler might be compelled, since Syria plays a major role in the region and in the Arab-Israeli conflict, to maintain close ties with Hezbollah, whose power is entrenched throughout the Middle East. This movement within the party reiterates the necessity of not turning a cold shoulder to the Muslim Brotherhood in Egypt and instead calls for concluding a historical agreement with them under the flag of “the Renaissance of the Islamic nation” in order to avoid the “Great Sedition,” an expression that refers to the historical division between Sunnis and Shiites.