Tulin Daloglu writes that the recent murders of three PKK members in Paris may not derail the current initiative by Prime Minister Erdogan, but other issues might. 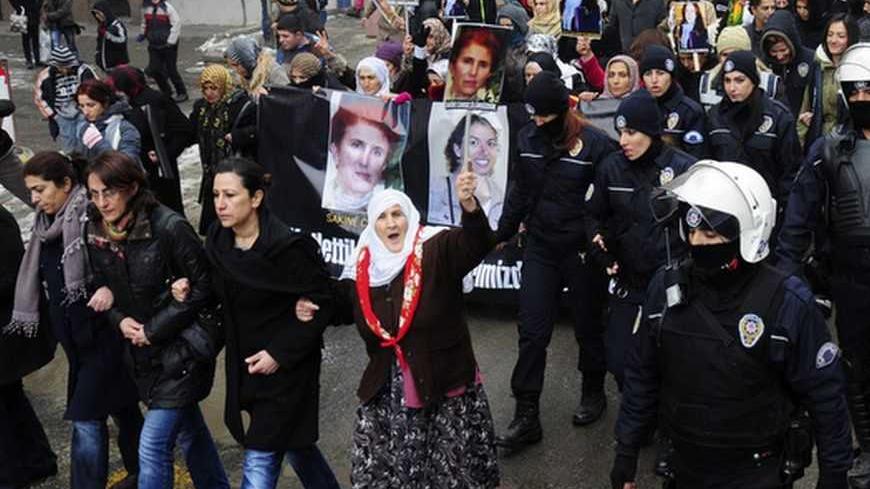 Many believe the murders of the three Kurdistan Workers Party (PKK) women on Jan. 10 in Paris were aimed to sabotage the Turkish government’s new efforts to find a peaceful solution to the long-lasting Kurdish issue in Turkey. While there is no doubt that these executions are going to have an impact, it is an exaggeration at best to claim that just one act can derail this initiative. Still, there are other serious potential challenges to this process.

First is the question of whether the public has been prepared for engaging directly with imprisoned PKK leader Abdullah Ocalan. Turkish Prime Minister Recep Tayyip Erdogan’s rhetoric on this issue seems contradictory.

When French President Francois Hollande admitted that he “knew one of the three women,” Erdogan exploded and demanded Hollande explain to the “French and Turkish public as to what he had discussed with this terrorist.” In response, Kemal Kilicdaroglu of the Republican People’s Party (CHP) and Devlet Bahceli of the Nationalist Movement Party, both opposition leaders, wondered what Erdogan would tell to Hollande “if he were to ask what he is discussing with the PKK leader.”

Kilicdaroglu and Bahceli argue that the Erdogan government has no clear strategy to address the issue and express distress over the ruling party’s political maneuvers that they say only aim to win votes in the elections.

For example, before the historic Sept. 12, 2010 referendum when a number of key articles of the Turkish constitution were put to a vote, there were widespread rumors in the media that the government was engaging in secret talks with the PKK.

“It’s at best dishonorable to suggest that any members of my party has sat down to talks [with the PKK]. No one in this party has ever done such a thing, or will ever do,” Erdogan said in August 2010. Only after the referendum did it come out that a meeting between the members of the Turkish National Intelligence Organization (MIT) and the PKK actually took place on Aug. 20 in Oslo, Norway.

While these lapses do occur regularly, some are more memorable than others. For example, the prime minister claimed in April 2012 that “as a political party, we have never engaged in talks with the terrorist organization," only to retreat from that position the following month, when he said, “I sent members of our National Intelligence Organization to Imrali [where Ocalan is imprisoned]. I will send them back again tomorrow.” And let’s be clear: Technically, MIT is no AKP, but no MIT chief would have the authority to engage in peace talks with the PKK if it were not to be authorized by the ruling party and the prime minister.

In the late 1990s, the position of the Turkish government was that it would not negotiate with terrorists under any circumstance. When Ocalan was put behind bars in a Turkish prison, though, many started to indulge in conspiracy theories. They worried that the state would miss opportunities to find a peaceful solution to this issue and that Ocalan will be released and even elected to parliament as a representative of Kurds. While that possibility still seems far-fetched, the government should know its own public and prepare it accordingly.

Moreover, the PKK has been pushing hard against the Turkish forces in the east and southeast of Turkey. They kidnapped Huseyin Aygun, a CHP deputy, in August and released him later unharmed, creating the image that they control certain parts of these territories. The PKK’s attacks on military posts escalated, and nearly a thousand people have died in acts of Kurdish terror in the past two years.

This is all taking place at a time when there is a heavy judicial clamp-down on Kurdish political activists. Kurdish activists claim there are nearly 10,000 Kurds in Turkish prisons today accused of being members of the Union of Kurdistan Communities, which the authorities say is the urban wing of the PKK. In November, the state prosecutor accused 46 lawyers who have represented Ocalan of passing on his orders to his members outside.

In brief, the Kurdish issue continues to boil with various dilemmas exacerbating one another, and the government needs to coordinate its steps if it is determined to bring this process to a successful completion. The mysterious Paris murders are just one element of the puzzle, and therefore should not be attributed a disproportionate importance. The Erdogan government still holds the key to making or breaking this process. One can only hope that they know what they are doing — for the sake of the whole nation, Turks and Kurds.