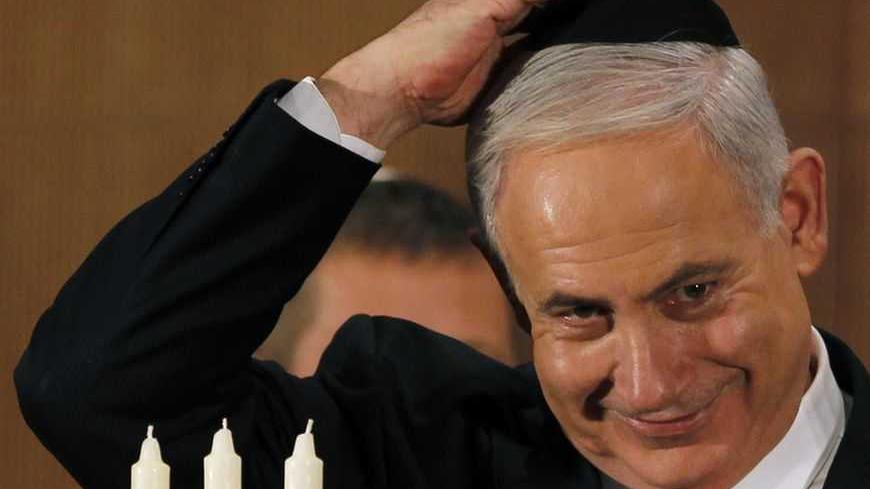 Israel's Prime Minister Benjamin Netanyahu adjusts his yarmulke as he lights candles for the Jewish holiday of Hanukkah after an address to foreign reporters in Jerusalem, Dec. 10, 2012. - REUTERS/Amir Cohen
January 2, 2013

Since the 1980s, it has become obvious that Israel has introduced another component to its “national security”: the preservation of the Jewish aspect of the statehood.

According to many Israeli researchers, this inclination came as a result of the shrill rejection of the Jewish identity on the part of Arab-Israeli leaders and academics, especially after the events of Land Day 1976.

The bloody clashes resulted in tensions between the Israeli political authority and Arab-Israelis, which have only grown over the three past decades.

The volatile climate is heading towards more escalation, ever since the political explosion between Israel and the Palestinians in 2000.

It is important, then, to bring to mind the essence of the analysis that was presented two years ago by Giora Eiland, which discussed the pertinacity of Israel’s self-definition as a Jewish state. The importance of this analysis comes from the fact that Eiland is currently one of the most prominent national security theorists, in addition to being a former major general in the Israel Defense Forces, and a former head of Military Intelligence (Aman) and the National Security Council.

Eiland believed that the demand of Prime Minister Benjamin Netanyahu, in which he said that a settlement freeze would only come about if the Palestinians recognized Israel as a Jewish state, has become a necessary condition for reaching a final settlement with the Palestinians (Yedioth Ahronoth 15/9/2010).

The first reason is related to the Israeli call to put an end to the conflict with Palestinians and to their prospective demands. The second is in relation with the status of Palestinians in Israel, the majority of whom believe that Israel must be a “state for all its citizens,” thus there is no need to preserve the national Jewish aspect of it.

If the Palestinian state to-be will not recognize Israel as a homeland for the Jewish people, then the possibility of Israeli Arabs recognizing this fact is very sparse. Hence, if Israel does not insist on this recognition, it might face a situation in two or three generations in which Palestinians demand equal rights. In that concern, violence might characterize their attempt to realize their demands. In case of such a scenario, there is no shadow of a doubt that the Palestinian state would give unbridled support to this demand, rendering it a pretext to breach the peace agreement with Israel. Therefore, in order to thwart this threat or to create at least a situation that would provide Israel with international support, an agreement must be signed that explicitly states state that Israel is a Jewish homeland.

A month after Eiland’s analysis, Aluf Benn, a political analyst and current editor-in-chief of the daily Haaretz, said that Netanyahu’s government, whose mandate began in April 2009, was directing its main effort at quelling the political and national aspirations of Israeli Arabs. He reiterated that the energy invested in achieving that goal is greater than that invested in the peace process or in warding off the Iranian nuclear threat (Haaretz 13/10/2010).

Benn revealed that the Israeli efforts in this concern are directed toward multiple fronts: legislative initiatives, changes in education system, symbolic acts and diplomatic moves whose target is to shore up Israel’s Jewish identity.

In parallel, the Arab community is required to surrender its demand in order to acquire a more “egalitarian” democracy.

Benn focused on the fact that internal tensions were directly related to Avigdor Lieberman, the leader of Yisreal Beiteinu, who was leading the struggle to quell the Arab community with the support of Ministers Eli Yishai and Yaakov Neeman. But they were only flag bearers. Netanyahu was hiding behind them as he was the initiator and instigator of that policy, though he kept a low-profile by merely expressing his views against Arabs. Netanyahu sees Israel as an inseparable part of the West and its culture and has not even a slightest interest or curiosity about the history, culture and language of the Arabs. Since he returned to power, Netanyahu has not visited even one Arab community. In addition, he has not held any dialogues with Arab minority leaders or any Arab intellectuals.

Netanyahu revealed his policy and motives toward Israeli Palestinians at the Herzliya conference on the Balance of Israel’s National Security in 2003, when he was finance minister in Sharon’s cabinet. At the time, Netanyahu was not in a decision-making position and his speech aroused little interest.

“We have a demographic problem, but it is focused not on the Arabs of Palestine but on the Arabs of Israel. We do not intend to control Palestinians. The declaration of Independence depicts Israel as Jewish and democratic, Jewish in the first place and then democratic. In order to stop democracy from wiping out the Jewish nature of the country we must insure the Jewish majority. The relation between the Jewish majority and the Arab minority has two faces. The first is that of the ability to integrate this minority into the state, the economy and the society. The second is that of numbers. If the Arab residents become well-integrated and their numbers reach 35% to 40% of the total population, the Jewish state will be canceled out and become a binational state. If their number remains around 20% as it is today, or even declines, but relations stay harsh and contentious, then, too, the democratic fabric of our argument will be impaired. Thus we have to adopt a policy to balance between both, but first we have to insure a Jewish majority in the state of Israel,” said Netanyahu.

As a prime minister, Netanyahu’s attitude has not changed. From his point of view, Israel is first a Jewish state and only then it is democratic. The state project to restore heritage sites, which Netanyahu is so proud of, neglects Arab heritage and directs all the focus on Jewish and Zionist sites. Moreover, the minister of education, a close associate of Netanyahu, expunged the Nakba from curricula. In addition, loyalty laws are finding their ways into the law books without any notable obstacles.

Above all, Netanyahu demands the Palestinians recognize Israel as “the state for the Jewish people,”, a recognition that seems to him a shield against future demands for autonomy in Negev and Galilee. In exchange for the oppression of Arab aspirations, Netanyahu proposes “internal economic peace” since he is aware that it will be difficult for Israel to grow if Arabs do not become part of the work force, on the basis of their relation with the state, not the homeland.