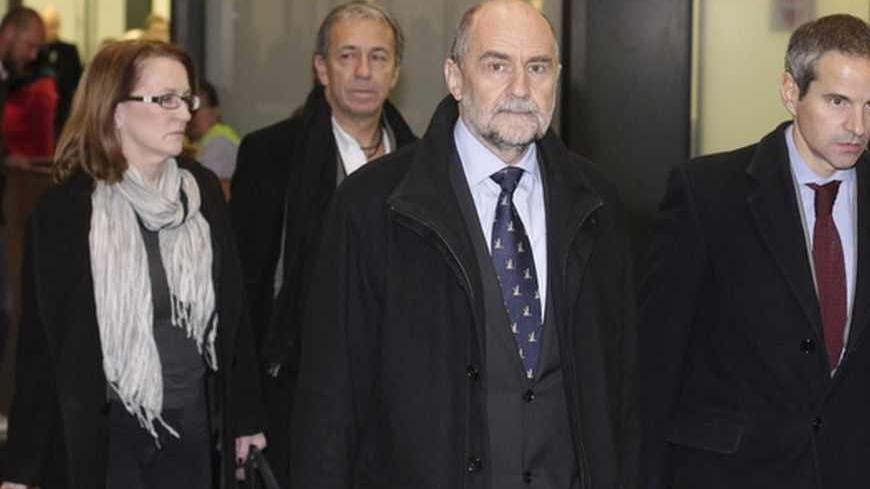 Herman Nackaerts (C), head of a delegation of the International Atomic Energy Agency, reacts at the airport in Vienna after arriving with his team from Iran on Dec. 14, 2012. - REUTERS/Herwig Prammer

The next six to 24 months are going to be the most vital period for Iran-US relations on both the nuclear dilemma and US-Iran relations. Eleven years of diplomatic negotiations on the Iranian nuclear dossier have failed. While the world powers and Iran are working on the next meeting to happen soon, the most critical question remains as to whether a feasible deal is plausible? Under President Obama’s leadership, the most comprehensive sanctions and punitive measures have been imposed on Iran, while Iran, in response, has accelerated its nuclear program. Iran has now accumulated over 7 tons of low enriched uranium, increasing the concerns of the West that if further enriched, it would enable Iran to build nuclear weapons.

The latest visit to Tehran by the IAEA on Dec. 13, 2012 — the first since August 2005 — provided an optimistic outlook for an agreement to resolve the IAEA’s remaining technical ambiguities on the Iranian Nuclear program. After returning to Vienna from Tehran, Herman Nackaerts, the deputy director general of the IAEA, stated: “We were able to make progress … We expect to finalize the structured approach and start implementing it then shortly after that … More talks are due with Iran on Jan. 16.”

The signals from the United States similarly indicate a more positive note, with Hillary Clinton commenting that “We are deeply engaged in consultations right now with our P-5+1 colleagues, looking to put together a presentation for the Iranians at the next meeting that does make it clear we’re running out of time, we’ve got to get serious, here are issues we are willing to discuss with you, but we expect reciprocity … we have, from the very beginning, made it clear to the Iranians we are open to a bilateral discussion.”

The Europeans are likewise hopeful for an agreement. Following talks with the Iranian counterpart, the EU’s foreign policy chief, Catherine Ashton, issued a statement affirming, “We hope that agreement with Iran can soon be reached on how to continue the talks and make concrete progress towards addressing international concerns and finding a diplomatic solution.”

The increased optimism has been attributed to Obama’s freer hand following his successful reelection bid, coupled with recent talks between Tehran and Washington. Despite the recent positive views and increased optimism on the Iranian nuclear dossier — I am more concerned than ever.

First issue is to recognize the fact the IAEA’s mandate is technical in nature, while the Iranian nuclear dossier is a political issue. Therefore, as I have mentioned before, a political agreement between P5+1 and Iran is needed first and foremost before the IAEA’s visit to Tehran. As I have been made aware, the next probable meeting between P5+1 and Iran is set for Jan. 15, 2013, while the IAEA’s planned visit to Tehran is scheduled for the next day. This timing signals that if the P5+1 and Iran can agree on a package at this meeting, Iran subsequently would be able to reach a deal with the IAEA on Jan. 16 — this would be an extraordinary breakthrough that everyone has been looking for all these years.

Second, Iran and the P5+1 need to prioritize and reach a compromise on the enrichment issue, prior to discussing the alleged history of Iran’s weaponization activities.  The IAEA’s Possible Military Dimension (PMD) issues are related to the past — this should not block the future. As long as the P5+1 is fixated on past activities, Iran would assume its nuclear file is being used as an instrument to advance their political agenda rather than seek resolution of the current crisis.

Third key point is about reciprocity. To break the current deadlock, both parties should present proportionate reciprocity. It is encouraging that diplomats from P5+1 have agreed to “update” the May 2011 package previously presented to Iran in Baghdad. That package asked Tehran to stop production of 20% enrichment, close the Fordow facility where such work is done and ship its stockpile out of the country; in return they would provide spare parts for Iran’s civilian planes. I likened the Western strategy to one of "peanuts for diamonds."

As it stands, the draft package prepared by the US and the EU contains slight alterations to the failed package presented to Iran in Baghdad last May. This is the reason that the Russians are insisting on a more realistic, significantly revised and generous package to be presented to Iran at the upcoming talks. By simply repackaging the previous proposal, the stalemate will continue.

If the next P5+1-Iran talks fail, it will deal a deathly blow to Iran-IAEA relations, marking the beginning of an end to Obama’s engagement policy. This in turn provides the warmongers in Tel Aviv and Washington an opportunity to demand more crippling sanctions against Iran and push the US to launch a military strike on the nation of 75 million people.

There is an urgent need for progress in upcoming talks. All parties have a historical responsibility to resolve the dispute over the Iranian nuclear dossier through diplomacy within a year. Based on my experience, the following elements can bring about a breakthrough in the upcoming talks between Iran and the P5+1.

First, Iran agreeing to place limits on its enrichment program. Iran can halt enrichment at 20% and cap its enrichment at 5% at a level that meets its domestic needs. This step from Iran, a measure beyond the requirements of the NPT, is a major condition of P5+1 and would go a long way toward reducing tensions with world powers. In addition, Iran can go even further and agree to the “Zero Stockpile Initiative,” either exporting or converting its excess enriched uranium beyond its domestic needs. This would provide the P5+1 with ample objective and measurable guarantees on the non-diversion of Iran’s nuclear program. To achieve positive momentum, the P5+1 should reciprocate appropriately. In my opinion, the EU should lift unilateral sanctions on the Iranian Central Bank and the oil industry.

Second, if Iran accepts the implementation of the Additional Protocol and Subsidiary Arrangement Code.3.1, it signals its commitment to the maximum level of transparency that exists internationally. This is a major IAEA and UNSC requirement and is an important confidence-building measure. Based on legislature passed by the Iranian parliament, the P5+1 would need to recognize Iran’s legitimate right to enrichment under NPT and in return Iran would provide the maximum level of transparency through the additional protocol.

Third, Iran agrees to address the IAEA’s Possible Military Dimension (PMD’s) issues, a key requirement of the P5+1 and the IAEA. This would require Iran to provide the IAEA access to facilities that are beyond NPT and the additional protocol — a step no other NPT member state would be ready to accept. In return, the P5+1 should suspend UNSC sanctions and ultimately aim to normalize the nuclear dossier once all of the IAEA’s technical ambiguities are resolved.

Fourth, Iran agrees to limit the capacity of its enrichment in line with Russian commitments to provide fuel for the Bushehr Power Plant. By voluntarily limiting its enrichment capacity, Iran will be making an unprecedented gesture of goodwill that is once again beyond the requirements of the NPT. In return, the US and the West should lift their unilateral-nuclear related sanctions.

In my opinion, this would constitute a genuine “More for More” initiative, ensuring a “Face Saving Solution” and a “Win-Win” outcome for Iran and the world powers. If all parties have good intentions, they would be able to devise a “Step by Step Plan” out of the four elements described above toward a peaceful end to the Iranian nuclear crisis.