Bassem Sabry analyzes Egypt’s progress on the two-year anniversary of the revolution that led to the removal of Hosni Mubarak from power. 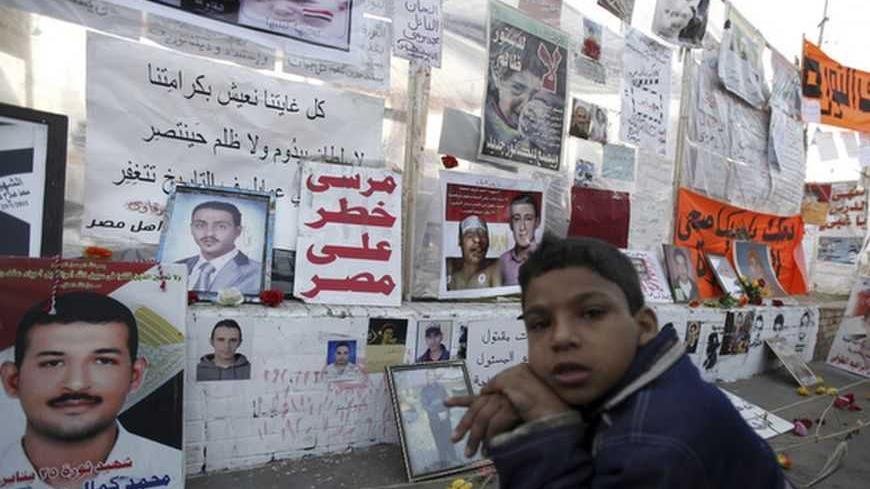 Mahmoud, 9, sits in front of a "Revolution Museum," dedicated to protesters killed during Egypt's uprising, set up by protesters against Egypt's President Mohammed Morsi at Tahrir Square in Cairo Dec. 17, 2012. - REUTERS/Amr Dalsh

I recently attended a comedy show in Cairo. In the opening act, a stand-up comic asked a mostly young and affluent crowd how excited they were that the second anniversary of Egypt’s January revolution was just in a manner of days. A deafening silence ensued for a few seconds, then limited, low-key and somewhat embarrassed laughs followed. The comedian then suggested (with gestures) that people will celebrate with self-flagellation this year, and the room erupted with laughter, defusing the tension. But there was a sombre tint in a few faces that the laughs could not fully mask.

While around this time last year many people were also quite angry and exasperated about how things stood in the country, the situation generally feels much bleaker this time around, and everyone is even more exhausted. To begin, the economy is genuinely suffering, the central bank has recently warned of Egypt’s reserves reaching critical levels (the governor and the deputy governor have also resigned) amid an influx of Qatari money in debate-stirring support, the pound has been losing value to the dollar, foreign investment and tourism continue to struggle and many locally are now abstaining from what they see as risky long-term investments. Egypt has been negotiating economic assistance with the IMF and international partners over roughly the same amount of time it takes to actually repay some loans.

Moreover, the current government has been widely accused of being non-transparent and non-consultative (a few observers have, not entirely falsely, suggested that the military was relatively more transparent while running the country), shaky and often going back on its often sudden decisions, lacking in vision and failing to manage the country or inspire confidence. The previous governments since the revolution have also either lacked vision or guts, or simply held onto the somewhat understandable restraining belief that they were nothing more than caretaker governments. The result has been that in nearly two years, no government has tried enough to do what was structurally necessary, or tried to do so in a proper, transparent and consensus-building way.

Furthermore, the country’s political forces have, over those two years, lost virtually every opportunity for consensus throughout Egypt’s transition to democracy. In fact, they could not even agree on a road map to such a transition from the start. The result has been an increasingly polarized and hostile political environment, with successive and increasing political sparring that recently culminated in fatal street clashes between supporters of the Islamists and the opposition. Their leaderships, and even some lower ranks on both sides (particularly the Islamists) are now locked significantly in a worldview that sees the other side as actively trying to destroy and even (re-)imprison them, if possible. The result is a destructive and ultra-confrontational political environment that can only bring the country down.

The reasons for this inability to reach a consensus have been manifold. On one hand, it was the disunity, unclear vision and relative failures of the secular-leaning opposition that often made them seem somewhat easy prey for the country’s better organized and well-rooted Islamists. On the other, in what has been revealed to be a deformed understanding of democracy, the country’s Islamists — particularly the Muslim Brotherhood — largely see democracy as nothing more than a form of majoritarianism wherein today’s ballot-box majority can pretty much do anything it wants.

The Brotherhood seems to have suffered a significant loss in credibility locally and abroad over these two years since Mubarak fell, despite the wider sympathy that many held for them back then. Originally hoping from the onset of the transition to be seen as a moderate and consensus-seeking force that is filled with competent professionals and academics who can lead a nation, the current image is increasingly instead one of a power-hungry group that has failed thus far in managing the country and has reversed most of its critical promises, including not running for the presidency (they fielded two candidates), not running for all seats of parliament, not attempting to overpower other participants in the political process in this post-revolution phase and others.

Another breaking point for them, of course, was the Islamists’ domination of the Constituent Assembly tasked with writing the constitution, which eventually led to the walkout of whatever opposition members who had not boycotted the (second) assembly from the start, as well as the church and other organisations represented in the assembly. To be sure, nonetheless, the decline in public appeal might not necessarily be reflected equally in the parliamentary elections due to the popularity of some of their individual candidates within their districts as well as what still appears to be an insufficient nationwide opposition presence, and direct personal appeal to the voters rather than just being “the alternative to the Islamists.”

And unlike the character void that appeared to exist a couple of years ago, Egypt’s political arena has grown crowded with new or reinvigorated politicians and presidential candidates. But many of them, astonishingly, lost much (if not all) of their appeal almost as fast as they appeared, leaving a more cynical void behind them and a thirst for even newer faces. Some who started out with significant appeal have instead become widely loathed. The country’s youth, said to be responsible for the revolution, have regrettably not made it into the political arena. Some remain focused on the street, while some have tried and failed due to being too Puritan or radical for real political work. It remains a country run by old men, and very few women.

Mohammed Morsi, the country’s first freely elected president, has also experienced a bit of a fall from grace. After a relatively successful start and a more moderate reconciliatory tone, climaxing with a rise in his local and international stature for a calm and pragmatic handling of the Gaza crisis and cease-fire, the president — almost overnight in November — was dubbed “Mursilini.”

Morsi’s failure to keep many of his more important promises (such as the appointment of Coptic and female VPs and reforming the Constituent Assembly), his moves to grant himself temporary absolute powers and freedom from judicial oversight to ram through a controversial constitution in a referendum when few had a real chance to properly discuss the final document, a confrontation with the judiciary, a turn to the Islamist base as well as his vague warnings of internal and external conspiracies against Egypt all have damaged his his attempts to project the persona of a determined, genuine consensus-builder who is adamant on bringing the country together.

On the subject of the constitution itself, there is regrettably much to disappoint in Egypt’s long-awaited and much-anticipated new charter, if we use the progressive narrative that surrounded the Arab Spring as a reference point. The new constitution, while bringing some welcome additions, ostensibly rolls back some religious freedoms, often contradicts its commitment to social and civil rights, retains military trials for civilians, could theoretically allow punishments for crimes not explicitly mentioned in the penal code and worse. For the country’s liberals and progressives, the document has been a true letdown. Still, amending the constitution is officially item number one on the next parliament’s task list.

Egypt’s media is growing. The private media is bolder, but it is also facing several threats, including legal challenges that result from still-existing archaic laws that condemn crimes such as “insulting the president” and “insulting the army,” as well as a host of contempt-of-religion charges. The country’s state-owned media is a bit better than the days of Mubarak, but numerous reports point to an increasingly tight control by the Muslim Brotherhood-affiliated minister of information over state television, while Al-Ahram’s print version seems to be turning into a mouthpiece for Morsi, with headlines and images deeply reminiscent of the days of Mubarak. Alternatively, the media — though filled with great analysts and bright new minds and faces — has also become filled with crude conspiracy theories and extreme and foul-mouthed religious evangelists, all of whom add to the general negative air and tension that has pervaded as of late.

Perhaps most disheartening, yet somewhat natural in the course of revolutions, is a growing alternative look at Mubarak. While acknowledging that he was in no way saintly, the narrative argues that he was still a “great patriotic leader” who managed to grow and lead such a complicated country, and that he was right when he said “either myself or chaos.” A less flattering version of the narrative begins by positioning him as a corrupt despot, but as one who “knew how to feed his people.” And many of those same people have recently expressed hopes over social media that the army — which no longer holds an official political role as of last August, though it remains a powerful and independent entity — would actually take back power. Some of those people were, by their own description, liberal.

Of course, it is not all bad. In fact, I began the year with an article explaining why I still see an incredible amount of hope in Egypt, and why I feel the historic momentum is still largely on the right side. There is a resilient private media, an increasingly aware and sophisticated society, more people getting deeply involved in politics, impossible courage and determination, a strong movement to grow civil society despite the hurdles, an opposition that is finally working together, an explosion of creativity and free expression and a growing realization by everyone that vacuous slogans and mere political positioning will not guarantee you political power.

Democracy, in many ways, is still showing signs of forcing itself — apparently against the will of some — to be born. A recent theory claimed that all revolutions go through a critical year-two point at which things look bleak, and indeed this is not where Egyptians hoped their country would be two years after their revolution. Still, it could all be saved, and I see many reasons to stay optimistic and resilient. I genuinely believe that.