While there is speculation and anticipation about the possible end of the regime of Syrian President Bashar al-Assad, Turkey’s challenges in Syria are far from over, writes Semih Idiz. 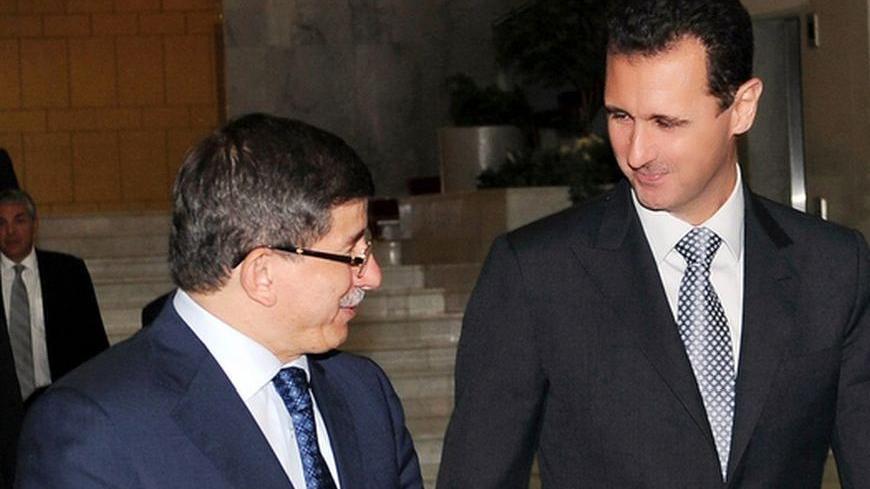 Speculation may be increasing about the nearing end for Syrian President Bashar al-Assad. Yet his future and that of his regime remain as uncertain as ever for Turkey, despite Foreign Minister Ahmet Davutoglu’s prediction in August that “Assad’s days are numbered, not by years, but by weeks or months.”

Recent remarks by Syrian Vice President Farouq al-Sharaa (considered in Ankara to be a moderate Sunni member of the Baath regime) are not encouraging either with regard to Davutoglu’s forecast. Talking to the pro-Assad Lebanese newspaper al-Akhbar earlier in the week Sharaa pointed to a deadlock in his country.

"The opposition cannot decisively settle the battle and what the security forces and army units are doing will not achieve a decisive settlement" Sharaa said, according to a translation of his remarks carried by the BBC. He went on to declare that what was needed for Syria was a “historic settlement” that involves a “national unity government.”

The government of Prime Minister Tayyip Erdogan, however, had initially placed all its bets on a military victory by the Sunni lead Syrian opposition. At times it even seemed that both Erdogan and Davutoglu had staked their political reputations on this outcome.

Ankara, however, has little choice now but to lend credence to Sharaa’s remarks given the unexpected staying power Assad and his regime, have demonstrated since the Syrian crisis first erupted. In short, it is unlikely at this stage that what lies in Erdogan’s and Davutoglu’s heart-of-hearts for the future of Syria will come about.

In fact, hardly any of Davutoglu’s Syrian predictions have come to pass, a fact that has tarnished his credibility given his often repeated claim to understanding the Middle East better than most. Ending up having to rely on NATO for Patriot batteries against a missile threat from Syria is clearly not where Davutoglu expected to be when he and Erdogan first embarked on their anti-Assad campaign.

On the other hand, it is also becoming increasingly clear to government circles that Ankara’s Syria woes will not end even if Assad should disappear tomorrow unless certain political steps are taken today. Foreign Ministry circles contacted by Al-Monitor are talking about the very real possibility that the country will slide deeper into civil war along sectarian lines if the regime collapses in a disorderly manner.

This is why Sharaa’s idea of a "national unity government” is not something that the Erdogan government can afford to brush aside anymore, even if it is uncomfortable with the idea. Put another way, there is increasing recognition in Ankara that elements of the present Syrian regime, and from among its backers in the country, will have to be incorporated into any settlement for the sake of future stability.

The sticking point for Erdogan and Davutoglu is whether their personal nemesis, Assad, will somehow remain or not. As far as they are concerned there is no place for him in Syria’s future. Yet Assad continues to cling on, with overt political support from the Alawite community, as well as Russia and Iran.

This fact, combined with fears for Syria’s future, especially if it is divided along ethnic and sectarian lines, is forcing the Erdogan government to come up with fresh proposals aimed at retaining Syria’s political unity.

According to a recent report in Radikal newspaper — which has not been officially denied — Ankara has apparently proposed to Russia that Assad step down in the first quarter 2013 in order to facilitate a transition process by the opposition National Coalition, which has been recognized as the representative of Syrians by Arab and Western states.

Given Russia’s reported interest in this proposal, it seems that Ankara is also coming around to acknowledging Moscow’s insistence about working with the regime in Damascus, a fact that has become a Russian “sine qua non” for any solution the crisis.

Ankara’s proposal also shows, of course, that Turkey is coming around to accepting the fact that there can be no military solution to the Syrian crisis, and that it is the political track that should be concentrated on now.

Ankara also appears to be trying to pull itself to the middle ground after months of giving the impression of backing the Sunni opposition against the regime supported by Alawites, and with scant interest in the fate of the Kurds, or other ethnic or religious groups in that country.

Talking to a recent gathering of Syrian Turkmen in Istanbul, Davutoglu insisted that Turkey was not supporting a specific group in Syria but was concerned with the fate of all Syrians be they Turkmen, Kurdish, Sunni, Alawite, Christian or otherwise.

“They are all our brothers” Davutoglu said, denying any suggestion that Turkey had provoked one element against another in that country. It is unlikely, however, that the Alawites, who continue to back Assad, or the Kurds, who are wary of Turkey’s intentions and have therefore cooperated with the Assad regime, will have been convinced.

There is of course no evidence to suggest that Assad — who still holds the reigns of power and commands the army — will accept Turkey’s proposal for a transitional government. As for reports in the Turkish press citing unnamed Turkish diplomats who say Moscow is trying to get Assad to leave for Venezuela, this is more likely to be wishful thinking at this stage.

The point however is that the Erdogan government is now seen to be working more closely with Russia for a political settlement to the Syrian crisis, after months of having blasted at this country for using its veto in the Security Council to block all possibility for a military intervention against the Assad regime.

That is a change of tack for Ankara even if its latest proposal for a political settlement falls by the wayside. By refusing to absent himself the way in line with Erdogan and Davutoglu’s desires, Assad has thus far proved that he has the capability of thwarting Ankara’s plans for a Syria run predominantly by Sunnis that are friendly towards the AKP and its Islamist leanings.