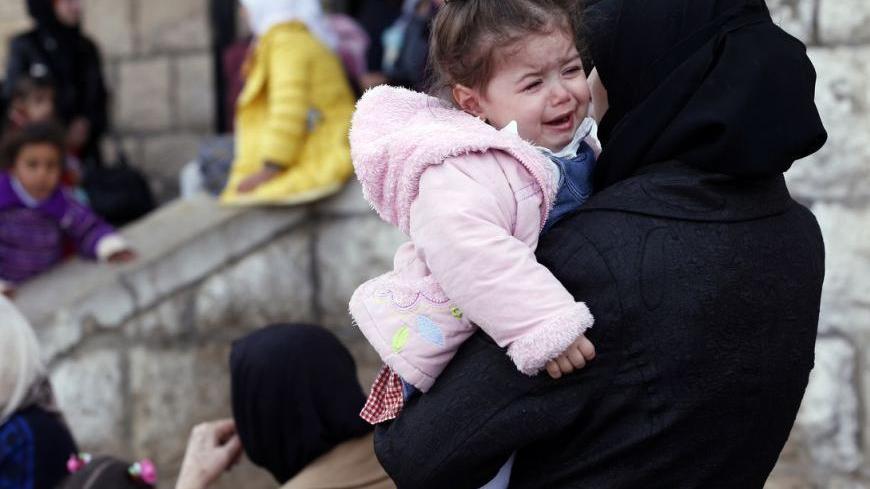 Palestinian women, who had been living at Yarmouk Palestinian refugee camp in Syria, wait outside the Lebanese immigration authority to have their papers stamped at the Lebanese-Syrian border, Dec. 18, 2012. - REUTERS/Jamal Saidi

According to the 2009 records of the Ministry of Interior’s Directorate of Palestinian Refugees, about 475,000 Palestinian refugees live across Lebanon’s six governorates. They live inside and outside of Lebanon’s 12 refugee camps that were created after the catastrophe of 1948, the displacement of 1967 and Jordan’s Black September of 1970. At the beginning of the 1970s, the official number of camps in Lebanon was 15, however between 1974 and 1976 three of them (Al-Nabatiyah al-Tahta, Tel al-Zaatar and Jisr al-Basha) were destroyed by Israeli shelling and the Lebanese Civil War. Only 12 now remain, and they include the following:

1.     Rashidiyeh houses 29,000 refugees and is located seven kilometers south of Tyre. Being the closest camp to Palestine, it was repeatedly exposed to Israeli shelling, especially during the Israeli invasion of 1982. The government of the French Mandate established the camp in 1939 to house Armenian refugees. However in 1948, it began accepting Palestinian refugees. In 1964, refugees began flowing in from Gouraud Barracks in Baalbek, coming mainly from the district of Safed and Haifa city and its environs.

2.     Burj al-Shamali was created in 1955, and is located near the village of Burj al-Shamali, three kilometers to the east of Tyre. Its total population is estimated at 19,000 people, and most of the refugees are from the villages of Hula and Tiberias. In 1994, Lebanese citizenship was granted to the former residents of 25 villages of the Hula district, and many of them live in this camp. In recent years, the population has declined resulting from increased migration to Scandinavia. The camp was exposed to a terrible massacre which occurred at the Hula Club shelter in 1982 during the Israeli invasion of South Lebanon, which claimed 100 lives.

3.     Al-Bas is located at the eastern entrance of Tyre and houses a population of about 12,000 people, a large part of which come from non-Palestinian backgrounds. Most of the refugees come from villages in the districts of Acre, Nazareth, the Hula and Galilee. The camp was established in 1939 to house Armenian refugees, and in 1948 it turned into a Palestinian refugee camp.

4.     Ain al-Helweh is located 5.1 kilometers to the southeast of Sidon. It has a population of roughly 70,000 people, the majority of whom trace roots back to 13 Palestinian villages spread over the districts of Acre, Galilee and Hula. In 1974, large numbers of refugees from the Nabatiyeh Camp transferred to this camp, as well as from the Beddawi and Nahr al-Bared camps in Tripoli in 1983, and from Beirut-based camps in 1985. With these successive waves of new residents, Ain al-Helweh became densely populated and the largest Palestinian refugee camp in Lebanon in terms of population. It is also the largest in terms of area, despite not exceeding one square kilometer. The camp was founded in 1949 by the International Red Cross, and management switched hands to the United Nations Relief and Works Agency for Palestine Refugees in the Near East (UNRWA) in 1950. The camp is a microcosm of the Palestinian political spectrum, encompassing all factions from the PLO, the National Alliance to Islamic jihadist cells. These forces continuously compete for influence and power, sometimes resulting in bloody and confusing clashes within the camp.

5.     Mieh Mieh is located on a hill about four kilometers to the east of Sidon, and has a population of about 6,000 people which mainly came from the villages of Safed. This camp was formed in 1954 and a section of it was destroyed during the Israeli invasion of 1982.

6.     Shatila was founded by the UNRWA in 1959 and had previously housed some 12,000 refugees, but today only about 5,000 remain. Many left during the waves of migration of the 1982 war on the heels of the Sabra and Shatila massacre, and during the 1985-87 war of the camps. The population steadily declined because of the migration of young people, who were later replaced by many undocumented Syrians, Egyptians, Lebanese and Indians who primarily worked as cheap laborers. Residents of this camp came from the villages of Upper Galilee. The camp is often linked with Sabra because of the massacre of 1982, even though Sabra is not technically a refugee camp, but rather a Lebanese neighborhood adjacent to the Shatila camp. The overlap between the two has caused them appear as one common zone.

7.     Bourj el-Barajneh was established by the International Red Cross in 1949 and is located just east of the road linking Beirut and the international airport. The total population is 16,000 refugees, half of whom are from the villages of western Galilee and the other half from the villages of Acre, and it houses a handful of Lebanese families. However, this number is decreasing because of the emigration of young men to Gulf and Scandinavian countries which makes the actual number of residents less than the figure mentioned above.

8.     Mar Elias is the smallest of the Beirut-based camps and was established in 1952 on land owned by the Greek Orthodox Church. It absorbed Orthodox refugees from Haifa and Jaffa. Despite that the camp surviving the horrors of the Lebanese wars, most of the original inhabitants emigrated to Canada and the United States, and were replaced by Muslim refugees. The camp gradually became the political center for the offices of the various Palestinian factions.

9.     Dbayeh is on a hill overlooking the town of Dbayeh 12 kilometers north of Beirut. Most of the inhabitants of this small camp are Palestinian Christian Catholics who came from the villages around Galilee. The camp owns the land of the Monastery of St. Joseph in Dbayeh. During the 1950s, a number of the camp's residents were granted Lebanese citizenship. During the 1970s, wars destroyed nearly half of the camp forcing the majority of its inhabitants to leave for areas in West Beirut and emigrate to Canada and the United States.

10.  Al-Jalil is close to the city of Baalbek. It was originally a French military barracks called Wavel, and it is occasionally still referred to as such. Refugees came to the camp in 1948 and its population is estimated to be approximately 7,000 people. This camp has experienced the highest emigration rates compared against that of other camps, with about 60% of its people emigrating to Denmark, which has since been dubbed “Camp Denmark.” A large portion of its population, approximately 3,000 refugees, trace their origins back to the districts of Nazareth and Galilee.

11.  Beddawi is five kilometers to the north of Tripoli. It houses a population of about 16,000 refugees, which primarily came from villages of the Safed and Acre districts. They had initially settled in one of the caravansaries north of the city of Tripoli, however the Abu Ali River flood in 1955 forced UNRWA to set up the camp to house the victims. The camp’s population increased after inhabitants of the Nahr al-Bared camp fled to it following the war of 2007 in the Nahr al-Bared camp.

12.  Nahr al-Bared is 16 kilometers to the north of Tripoli on the international highway leading to Syria. The number of residents of the camp gradually increased until it reached 30,000 in 2007, and most of them came from villages of Safed and Acre. It was founded in 1949 and had enjoyed economic prosperity due to its proximity to both the sea and the international highway. It experienced to two catastrophes, the first of which occurred in 1983 when it was heavily bombed during the skirmishes that had erupted between the members and dissidents of the Fatah movement. The second occurred when Fatah al-Islam gained control of the camp and clashed with the Lebanese Army, ultimately leading to the near-total destruction of the camp.

These camps came into existence mainly to fill the demand for labor, especially in Basatin Al Janub, and the following are considered the most prominent of these camps:

1.     Al-Mashouq, between the Al-Bas and Burj al-Shamali refugee camps, houses some 3,500 people who originally came from Acre and Safed.

2.     Shabriha, near the town of Shabriha to the north of Tyre, houses about 5,000 people, most belonging to nomadic tribes and small farming communities.

3.     Al-Qasimiyah, at the mouth of the Litani River 13 kilometers to the north of Tyre, has a population of about 3,000. The residents of this camp are mainly Bedouin Palestinians from the Safed village of Al Khalis.

4.     Abu al-Aswad, 16 kilometers to the north of Tyre, is a small camp whose population does not exceed a thousand inhabitants and are mainly Suitat and Samniya Arabs.

Over many years, several Palestinian residential clusters were established in the regions of Tyre and Sidon in a quasi-random manner. These clusters continued to be ignored by the relevant organizations until some of the inhabitants organized protests demanding access to healthcare and educational centers, and the UNRWA responded positively to some of their demands. The following are the most prominent of these clusters:

4.     At`aniyah is near Al-Wasta and its population does not exceed 300 people.