Khalil al-Anani examines how Egyptian President Mohammed Morsi’s personality, worldview and career in the Muslim Brotherhood have influenced his recent actions as president. 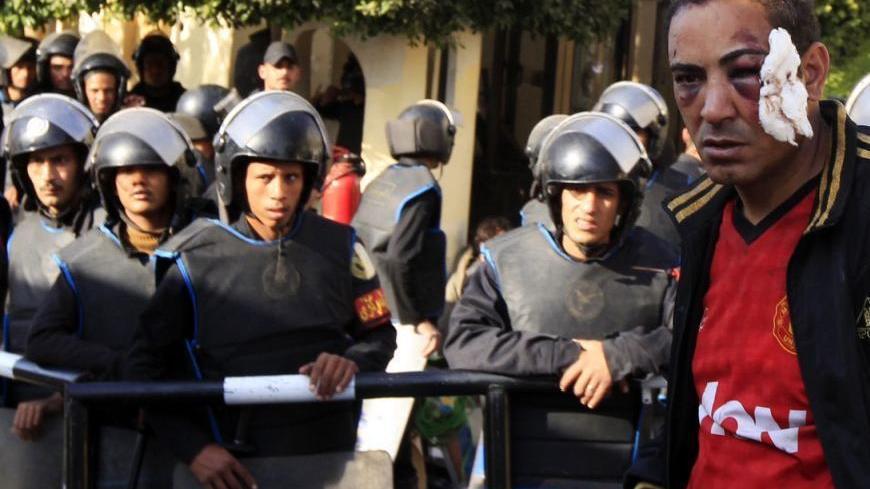 A protester who was injured during overnight clashes between supporters and opponents of Egyptian President Mohammed Morsi, is detained by the Republican Guard in front of the presidential palace in Cairo, Dec. 6, 2012. - REUTERS/Mohamed Abd El Ghany
December 6, 2012

Is President Mohammed Morsi an autocrat or a theocrat?

He may be neither or both.

Judging the Egyptian president’s ruling style should not be based on his ideological or theological background, as some accounts have argued, but rather on his politics and personality.

Morsi’s decisions as president reveal a desperate need to prove himself as a “strong” president. So far he has only proven the opposite. The recent deadly clashes between pro- and anti-Morsi supporters recall the confrontation between Mubarak supporters and protesters at the beginning of the revolution. The only difference is that this happened only three months after Morsi took power, not three decades as it was the case with Hosni Mubarak.

Despite his power grab, Morsi has shown weakness, not strength. Morsi thought that his decree could reshape transition dynamics to fit with the Muslim Brotherhood’s interests. He ended less powerful and his movement became more isolated.

To understand the underlying factors behind Morsi’s latest decree, one needs to discern his personality and  worldview.

Indeed, the story of Morsi in power resembles his journey within the Brotherhood. He has strived to portray himself as a “self-disciplined” leader with serious character. He is not a “smiling” politician. It was part of his political persona.

Politically speaking, Morsi always acted like a “man-on-a-mission.” He was one of the average members in the Brotherhood, but became a self-made success, and, as we know, is now president of Egypt.

A hard worker and devotee to the conservative wing that has controlled the Brotherhood since the end of 1990s, Morsi in a few years (2000-04) proved himself as a trustful and loyal cadre to the Brotherhood leadership.

He was always ready to deliver and do the jobs that others might resist. Surprisingly, yet understandably, he became the Head of the political division of the Brotherhood at the expense of the shrewd and politicized figure, Essam al-Eryan, who was alienated and marginalized.

Morsi was also responsible for accommodating and containing discontent among the Brotherhood youth that surfaced in 2007 and '08.

From 2005 to 2010, Morsi exemplified the most resilient and resistant character of the Brotherhood in the face of the Mubarak regime, which gave him added power and confidence.

After the revolution, Morsi’s ikhwani career became more visible. He was selected to be the head of the Brotherhood’s Freedom and Justice Party (FJP).

Morsi, and not the Supreme Guide, represented the Brotherhood in negotiations with Omar Suliman only a few days before the downfall of Mubarak.

Ironically, the promotion and emergence of Morsi reflected his organizational commitment and acquiescence to the Brotherhood leadership and objectives.

After becoming president, Morsi maintained his style as a “man-on-a-mission.” For many, he is acting as the Brotherhood’s man in the presidency, rather than the president for all Egyptians.

Morsi’s ruling style can best be described as an autocrat under construction.

He seems to believe that solidifying power should go through usurpation, not negotiation. His success in kicking out the military from politics encouraged him to do the same with the judiciary, which revealed a lack of shrewdness and questionable political skills. Mubarak was astute enough to co-opt and accommodate judges in a way that neutralized, if not spoiled, them in the political arena.  Instead of accommodating the judges, as Mubarak did for 30 years, he added another layer of opposition.

Moreover, despite his religious appearance and rhetoric skills, Morsi could not completely convince Egyptians that he was the “faithful” president. Indeed, his overt religious behavior and appearance irritated many Islamists and provoked ultraconservative and jihadi Salafists who dismiss his religious credentials.

Additionally, over the past two weeks, Morsi has been the key target of the opposition’s attack and media mockery.

Since he took power, Morsi has tried to consolidate his rule by adopting "populist" rhetoric at the expense of taking any genuine decisions that could foster the democratic transition in Egypt. He has displayed neither the sensibility nor skills to be a “neutral” president. He has taken the strongman route.

Contrary to his aims, Morsi has exposed, very early, his autocratic disposition by issuing a totalitarian decree, and, unless he changes course, may end up to be the shortest-lived president in Egypt’s history.

Khalil al-Anani is a scholar of Middle East politics at the School of Government and International Affairs at Durham University and a former visiting fellow at the Brookings Institution in Washington. He can be reached at: kalanani@gmail.com. On Twitter:  @khalilalanani