For the first time, Iran gave a point-by-point response to an international proposal on halting its 20% enrichment activities on June 18 in Moscow. But international diplomats said the presentation only made the diplomatic challenge of narrowing the gaps between the two sides in the near term more daunting. 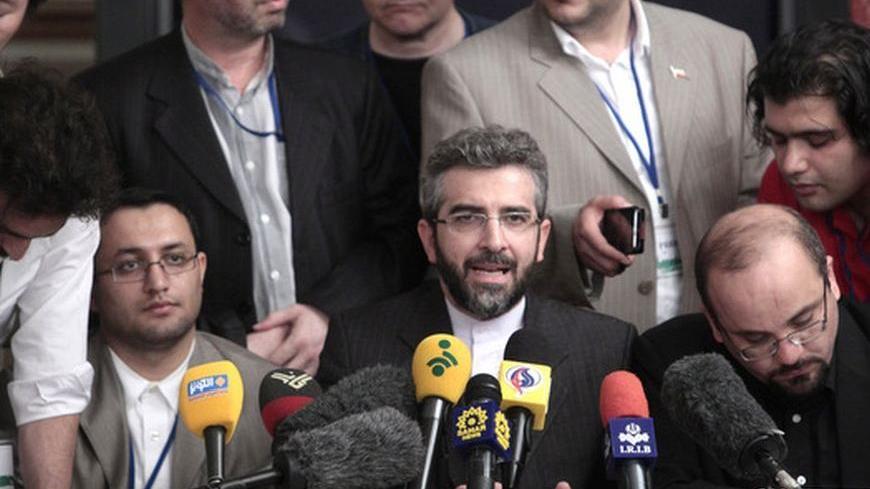 Iran for the first time on Monday, June 18, gave a point-by-point response to an international proposal on halting its 20% enrichment activities. But international diplomats said the presentation, replete with PowerPoint slides, if anything only made more daunting the diplomatic challenge of trying to narrow the yawning gaps between the two sides in the near term.

“We had an intense and tough exchange of views today,” Michael Mann, spokesman for European Union foreign policy chief and lead international negotiator Catherine Ashton, told journalists at the conclusion of the first day of international Iran nuclear negotiations in Moscow Monday.

The Iranians “responded to our package of proposals from Baghdad but, in doing so, brought up lots of questions and well-known positions, including past grievances,” Mann said. “We agreed to reflect overnight on each others’ positions.”

“It’s not enough, it’s not close to enough,” a diplomat at the talks said later on condition of anonymity, and that the lengthy Iranian presentations Monday did not strike him as signaling Iranian seriousness about negotiations on confidence-building steps.

Then again, the Russians would not want the Iran diplomatic process to “break down” on their turf, he surmised. Some stray hopes for progress rested on the fact that lead Iran negotiator Saeed Jalili had a dinner meeting Monday night with his Russian counterpart, Nikolai Patrushev, the secretary of Russia’s national security council and former FSB chief, although no results from it were yet known that night. “We’ll see what happens tomorrow,” the official said.

The lead Russian negotiator at the talks acknowledged wide gaps in the two sides’ thoughts on how to structure and sequence a work plan for easing international concerns about Iran’s nuclear program and accumulating stockpile of 20% enriched uranium.

“The difficulty here is not only quite a distance between the positions but also the sequencing … what comes first, what comes next, what this reciprocity means,”  Deputy Foreign Minister Sergei Ryabkov told journalists upon leaving the meetings, at a hotel near Moscow’s Foreign Ministry and famed Arbat pedestrian boulevard. “The logic of the negotiations is extremely complicated.”

Diplomatic observers cautioned that these high-stakes multiparty talks tend to have an ebb and flow, and things that look irrevocably stuck at one point sometimes got unstuck a few hours later. Sometimes.

“Give this some time,” a European diplomat said late Monday. “We can’t judge the talks every five minutes.”

Mann’s statement that the parties had agreed to “reflect overnight” seemed to be a code for the Iranian negotiators to take an opportunity to make calls back to Tehran for further consultations and instructions. (The point at which it becomes evident that things can’t move further until Iran calls back home occurs in every such meeting, diplomats have said.) There were likely some calls back to Washington and European capitals Monday evening as well.

Iran’s negotiating team, for its part, seemed more upbeat as talks concluded for the evening, portraying as positive its opportunity to expand on an Iranian proposal it raised at a meeting last month in Baghdad. In an unusual move, Iran’s deputy negotiator Ali Bagheri, briefed journalists at the conclusion of the first day of talks Monday.

But western negotiators, stressing the need for Iran to take “concrete steps,”  didn’t seem to have warmed much to the plan, which calls for operationalizing the Supreme Leader’s fatwa against nuclear weapons through the IAEA and recognition of Iran’s right to enrich to 3.5%, among other points.

Iran analysts said Iran’s negotiating behavior made it hard to know if it was seriously considering a compromise, holding out for a better deal or still unsure.

“Tough talk can of course indicate that Iran is ready to compromise,” Alireza Nader, an Iran analyst at the Rand Corporation, told Al-Monitor by email Monday. “But tough talk also might mean that Iran has made the decision that negotiations are fruitless. Hard to tell, but if that’s the case there is a good chance the talks might collapse.”

“Part of me fears that despite the economic pressures, the Islamic Republic has chosen to continue on its current course:  A high risk gamble that may entail great economic hardship and war, both of which the regime has endured in the last three decades, in exchange for a nuclear-weapons capability,” Nader added.

“We should not be surprised by the Iranian reaction since it was completely predictable,” Trita Parsi, president of the National Iranian American Council and author of a book on Obama’s Iran diplomacy, A Single Role of the Dice, said.

“They don’t play a complicated game, just a very simple tit-for-tat,” Parsi said. “There was a backtracking from the US side on the enrichment issue between Istanbul and Baghdad, so the Iranians are backtracking to their usual unhelpful rhetoric and speeches.”

Amid their evident exasperation, diplomats acknowledge that Iran is at long last engaging in sustained discussions on the nuclear issue, as it has not done before. It has also seemed to be trying in recent months to become more responsive to international requests for how to engage more constructively at these meetings, at least stylistically (witness the PowerPoint presentation). What remains unclear is if the wide gaps in worldviews and expectations can be narrowed in sufficient time, and if Iran can be convinced it needs to take the first step on curbing its 20% enrichment — probably without upfront promises about sanctions relief or recognition of its right to enrich to 3.5%.

Western diplomats were more firm Monday that there was almost no prospect for averting EU sanctions on the import of Iranian oil set to go into effect at the end of the month.

On Tuesday morning, Iran's deputy negotiator Bagheri held a bilateral meeting with Russia's chief negotiator Ryabkov, before diplomats from all seven nations went into a series of plenary talks. Russia was seeking a compromise that could let the parties find a "reasonable" workplan going forward, Iranian and western diplomats said. One that would, at least, avoid talks sputtering to an uncertain finale in Moscow.
In the meantime,  President Barack Obama, meeting with Russian President Vladimir Putin on the sidelines of the G20 talks in Los Cabos, Mexico Monday, expressed the two countries' support for a diplomatic resolution to the Iran nuclear issue.
"Our common goal remains a comprehensive negotiated settlement based on the principles of a step-by-step approach and reciprocity, and we look forward to constructive engagement with Iran through the P5+1 process," they said in a joint statement.
Talks are due to resume with a plenary session at noon Tuesday, Mann said, adding that the morning had been left open for possible bilateral meetings, should Iran agree to any.