Egyptians Turn Out in Droves On Election's First Day

Despite the high turnout, the long lines stayed generally calm and organized on the second day of the Egyptian presidential. Although former prime minister and candidate Ahmed Shafiq was pelted with shoes and stones at a polling station Wednesday, disruptions remained minimal for such a charged event. 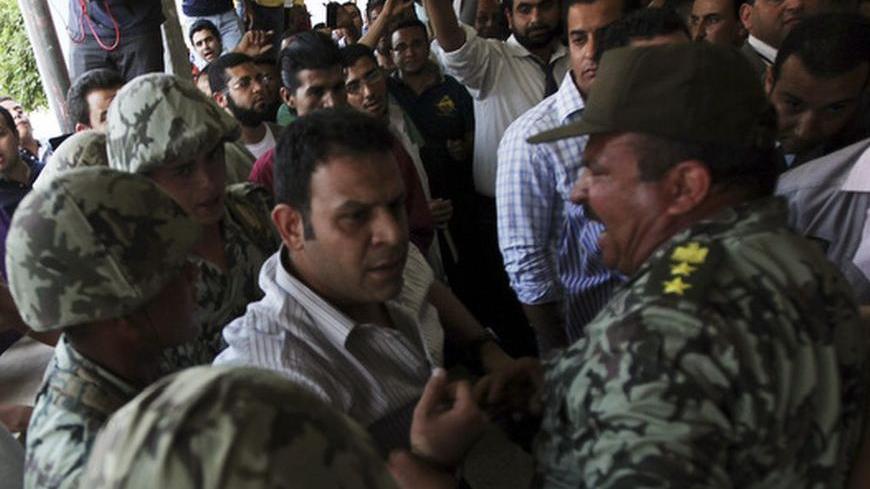 Army soldiers hold back a protester who tried to attack former prime minister and presidential candidate Ahmed Shafiq as he is leaving a polling station, after casting his vote in Cairo May 23, 2012. - REUTERS/Amr Dalsh

As voting continues in the second day of Egypt's presidential election, the air of celebration continues much as it was reported Wednesday [May 23, 2012] by Sophie Claudet:

In Maadi, a mixed posh and lower-middle class southern Cairo suburb, people queued up as early as 6 am, though voting stations didn't open until 8. Some openly discussed politics in the long line.

A fully veiled, niqab-clad woman told her friend she couldn't possibly vote for the Muslim Brotherhood: “They will take over the country. They already control parliament.” A young woman swore only Mubarak’s former prime minister and air force commander, Ahmed Shafiq, can restore peace and stability. Some around her voiced their disagreement. “I’m happy, but mostly scared,” said a middle-aged woman. “I’m 90 percent scared that the poll will be rigged as it’s always been in the past, and I’m 10 percent scared my candidate won’t be elected and we’ll get a foloul instead,” she told me, referring to the remnants of the old regime. “You know, Amr Moussa and Ahmed Shafiq, Mubarak’s old allies.”

At 8:15, a polling station set up in an elementary girls’ school, hadn’t opened yet. The crowd, only women in this particular spot, was growing impatient. I didn’t see many youths — it was early, perhaps they were sleeping. A man tried to make his way through carrying a large crate bearing the name of a popular chips brand — ballots, I was told. Ten minutes later, another man arrived with a brown suitcase he carried on top of his head, ballots too. Several women burst into laughter.

The doors opened at last. Voters proceeded, one by one, strangely and suddenly calm. Most proudly lifted their ink-soaked fingers on exit with a wide smile. A woman cried; it is happiness, she says.

Downtown Cairo, mid-day. Men and women formed in two separate lines, but there weren't many young people. Did they oversleep on Egypt’s historic day? Did they boycott the poll, as many said they would?

Overheard conversations. “At least for the first time in our lives, we won’t know the winner beforehand! I hope we’re not in for a bad surprise, though,” said a woman to her friend. I heard fear and concern, too, that the polls could be rigged. Rumors that in another location, supporters of Abul-Fotouh were campaigning in front of a polling station. Rumors that bribes were being distributed to voters.

Again, there were many, many happy faces once people voted. A woman lifted her two fingers, one ink-stained, in a victory sign — that of the revolution, she told me. Her name is Butheina Kamel, she almost ran for the election; she would have been the first woman ever to run in Egypt. She came up short of 10,000 signatures to be endorsed. “I have no regrets, but I do worry about the outcome of the election. We can’t have the old Mubarak clique back, yet again,” she said.

Later I went to check with Shayfeecom, an organization of volunteers manning a hotline which people can call to report fraud. There were many young people this time. They’ll vote tomorrow, they tell me. “So far, so good. A few reports of rigging but really very few. We’ll send out people to check,” said a girl sitting on the floor with her laptop on her crossed knees. People frantically checked and updated their Twitter accounts. The TV was on, the sound muted, with a ticker reporting a “modest but healthy” turnout.

At 2pm, Egyptians had another 6 hours to cast their ballots. But it didn't look like the polling stations would be closing any time soon.