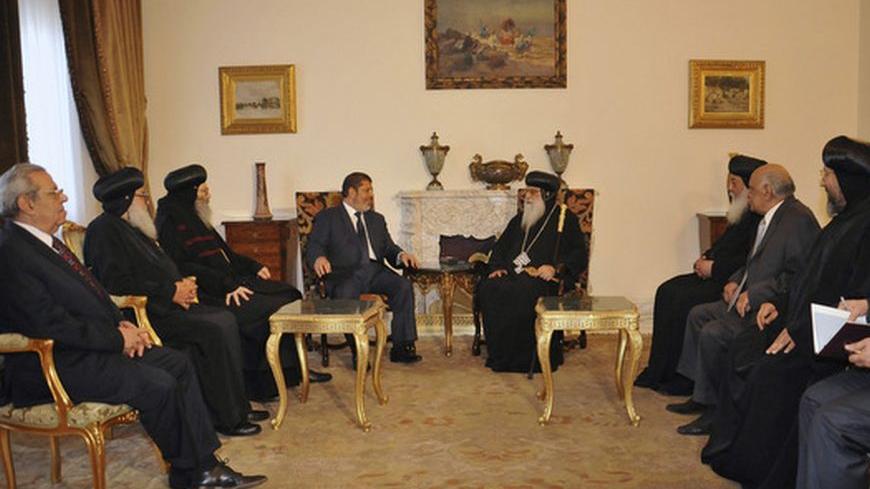 Egypt's President Mohammed Morsi meets with a Christian delegation headed by the caretaker pope of the country's Coptic Church, Bishop Bakhomious, at the presidential palace in Cairo June 26, 2012. - REUTERS/Handout
August 5, 2012

CAIRO — In a tradition dating back almost 2,000 years, Egypt’s Coptic Church has begun the laborious process of selecting a new pope amid a transitioning political landscape that throws into question the role Copts will play with Islamists now dominating the government.

The selection process, expected to yield results in November, comes four months after the death of Pope Shenouda III, leader of the Coptic Church for 40 years. The field of candidates includes 17 bishops and monks, all older than 40 and with at least 15 years in monastic life. Almost 2,600 voters have been designated, from clergy to laity, across the dioceses in Egypt and around the world. More than one-fifth of the voters are members of the Christian church abroad, an unprecedented count by this ancient institution, signaling changing times.

“Traditionally, the church has had a fine line to balance: on the one hand aiming to serve the interest of the Copts, while at the same time keeping up workable and viable relations with the state,” said Vivian Ibrahim, author of The Copts of Egypt: Challenges of Modernization and Identity. “The new pope will have to play a balancing act with a new government: for the first time since 1952, the president is a non-military man and a conservative Islamic leader.”

One of the oldest and largest Christian communities in the Middle East, Copts have been in a fight for liberty and survival in recent years, with issues including intimidation, job discrimination and tougher church-building restrictions fueling tensions. The group has been specifically threatened by al-Qaeda and targeted in several attacks, including a New Year’s Eve bombing in Alexandria, just three weeks before the Egyptian Revolution, leaving 21 people dead. The Alexandria bombing sparked a wave of national and religious unity in Egypt that lasted through the earliest days of the revolution. However, sectarian strife arose again last October, when the demolition of a church in Upper Egypt sparked clashes between predominantly Coptic protesters and the military in front of Maspero, the national television station, killing 28 people.

Sectarian strife continues; the latest incident, just last week involved a Christian dry cleaner who allegedly burned the shirt of a Muslim man, sparking riots in a town near Cairo that have killed at least one person. Another 16 people were injured, according to news reports.

For many Christians in Egypt, the worst-case-scenario unfolded with Islamists rising to power, first in parliament, then later, with the victory of President Mohammed Morsi of the Muslim Brotherhood, potentially jeopardizing efforts to maintain a secular, civilian state. Copts, who represent roughly 10% of Egypt’s 82 million-strong population, have traditionally held a low representation in government, but Islamist gains are causing some to fear total alienation.

“Now that the wall put up by the Mubarak regime is gone. Many – Christians and non-Christians – are considering participating in politics,” said Emad Gad, a Christian member of Egypt's recently dissolved lower house of parliament for the Egyptian Social Democratic Party. “The new pope, even if he tries to get involved in politics, will probably find some opposition because Christians are increasingly looking to have a voice from a secular, civil standpoint, not a religious one.”

The late Pope Shenouda III was a steadfast supporter of former President Hosni Mubarak, despite a few minor hiccups in their relationship: Shenouda was placed under house arrest by President Anwar Sadat for his public opposition to Sadat's policy of Islamization, and remained there for four years after Mubarak’s succession. While Copts revered Shenouda as a spiritual leader, the revolution drove many to re-evaluate the relationship between the church and state. In one example, a group of Coptic Egyptians dubbed “Right to Life” unsuccessfully challenged the church’s strict anti-divorce policy, claiming it was a civil issue that should be handled by the state.

During his last Christmas sermon, Shenouda thanked the ruling Supreme Council of the Armed Forces (SCAF) for its role in safeguarding the nation, sparking fury among many Copts as it followed the deadly clashes at Maspero. His intention, says Ibrahim, was to assert the traditional “lip service,” hedging his bet against the Muslim Brotherhood's rising power.

Morsi has already made some minor gestures of outreach to the Coptic community, including a promise to select a Coptic vice president. But many here are skeptical, particularly as Morsi’s power struggle with the SCAF sidetracks many other state affairs. Copts were deemed supporters of Morsi's opponent, Ahmed Shafiq, and the community as a whole is believed to be apprehensive of a Brotherhood-led government.

“If the new pope comes from a younger generation, he may well adopt a more confrontational approach with Morsi — one that insists, for instance, on the prosecution of those who engage in sectarian violence,” said Paul Sedra, an associate professor of history at Simon Fraser University and a specialist on Christian-Muslim relations. “Whether or not the new pope comes from a younger generation or from Shenouda's generation, though, he will certainly face greater pressure from Copts both in Egypt and in the diaspora to stand up for Copts' rights of citizenship.”

As the political ambitions of the Egyptian populace are increasingly realized, a major question for the new pope is whether he represents an exclusively religious institution, or one that involves itself in state affairs. Many Copts participated in the revolution to overthrow Mubarak, despite Shenouda’s support of the regime. Copts include conservatives, leftists, secular voters and non-participants, but this is not often highlighted, and the group is commonly lumped into the single category of “Christian.”

“One of the most interesting approaches his successor could take would be to open the church up to greater input from 'ordinary' Copts,” Sedra noted. “The pressure on the Patriarch to incorporate more voices into his decision-making will be great, and it will be an enormous challenge for him to do so while still retaining his authority over the community.”

Vivian Salama has spent much of the past decade reporting in the Middle East for Bloomberg News, BusinessWeek, Time, Newsweek, The Washington Post, and USA Today, as well as academic journals. She also has appeared as a commentator on the BBC, France24, Bloomberg TV, TV New Zealand, CBS News, among other outlets. She covered the recent revolutions in Egypt, Libya, Yemen, Bahrain and Syria.