A roundup of Arab media reaction to President Obama’s re-election. 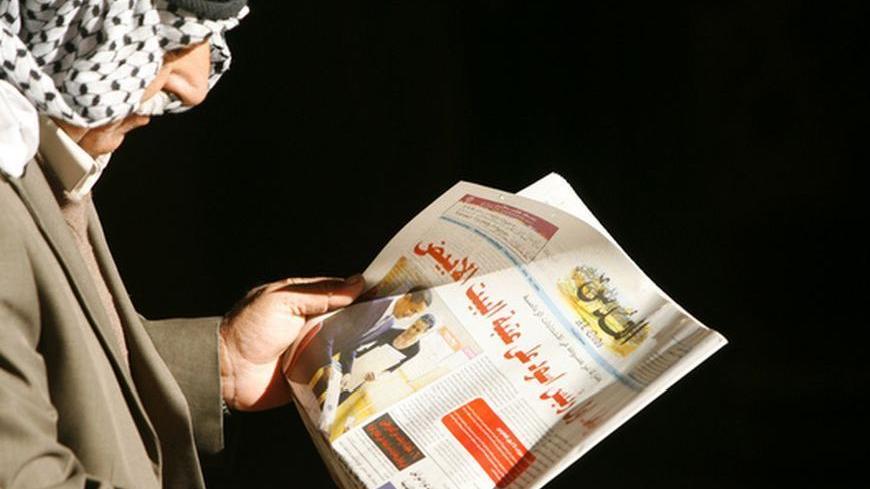 A Palestinian holds a newspaper, depicting US President Barack Obama and his wife Michelle, in the West Bank city of Ramallah November 5, 2008. - REUTERS/Fadi Arouri
November 8, 2012

The main question that As-Safir’s editorial covers is: “Will [President Obama's] main concern be the US economy, or will he become more stringent in US foreign policy and national security?” As-Safir believes that the US president will be freer in dealing with foreign-policy challenges during his second term.

The editorial adds that the latter will be obvious when covering “issues from Syria, Iran and Palestine alongside China and Russia, as well as the Arab Spring states and Sudan, Mali, Pakistan and Afghanistan and when dealing with the terrorism files."

The opinion piece from Al-Ayyam stresses that “if there were to be a change in the US approach to the peace process and negotiations, the first immediate test will take place within a few days, when the Palestinians submit their request to the United Nations.”

The author goes on to state that “there is yet room for another test, which is the level and nature of intervention and US impact in the upcoming elections in Israel, as some bet that President Obama might work to support the opposing alliance of Likud-Yisrael Beiteinu.”

The Al-Khaleej writer said, “After having Obama win his second mandate, the mere talk about change, or giving further attention to the issues of the Arab region in general, and the Palestine cause in particular, seems to be farfetched […]”

“It is up to the Arabs in general and the Palestinians in particular to look at their relations with the US through their issues and interests if they want to achieve a real change in US foreign policy and its orientation toward the region. They should also know that betting on the victory of X Democratic candidate or Y Republican one is a game intended to divert their attention and to cover up the tragedies they had suffered as aresult of such bets.”

Al-Hayat’s editor-in-chief, Ghassan Charbel, stated that the US elections are not only limited to US citizens but to “the global citizens in their economy, security and stability. The number of people who object to or dislike US policy is higher than its supporters. Nevertheless, this fact does not put into question the weight of this country that could win World War III without firing a single bullet.”

He concludes his article by saying: “It is clear that we are facing a long-term test. The key challenge is to improve people’s lives through their jobs, dignity, opportunity, mutual respect and by empowering women. Perhaps the main perspective is to pay attention to our schools, universities and curricula in order to modernize and update them. Otherwise we will follow US elections every four years and the Arab Spring will simply be false hope that quickly faded."

Al-Hayat’s columnist Hassan Haydar presented a more skeptical view of President Obama’s re-election concerning Syria and Iran. “.. the old/new administration will not change its position pertaining to the arming of the Syrian opposition.” He notes that the president is not convinced that changing the balance of power in Syria is a US responsibility and does not feel that he will intervene directly in this crisis. The author further adds: “President Obama’s strategy is based on the principle of withdrawing from areas that will drain its power without any hope of final victory.”

When mentioning Iran, he says that “Tehran is happy with Obama’s re-election because it will rule out, to some point, the military choice that Israel is promoting.” He goes on to add that “Obama will face a difficult choice after he has stated that Iran will never possess a nuclear weapon and that the economic-sanctions policy is the best way to achieve this goal.”

Siham Boursouti interviews Dr. Mustafa Kamel al-Sayyed, president of the Center for the Study and Research of Developing Countries, who said that: “The policy of re-elected President Obama will not change and will continue as is," describing it as positive. He further adds that his re-election “will serve the Arab and Middle East region.”

Kamel explained that “the most important challenge is his ability to end the Iranian nuclear program without resorting to war," and that President Obama will be more firm when dealing with the Syrian crisis, adding that "he will avoid military intervention so as not to cause the collapse of the system and a civil war between the various Syrian minorities, and in order to avoid Islamists coming to power.”

The columnist for Al-Hayat said that “Now that the president has achieved what he wants, and will be with us holding his new title, 'leader of the free world,' until 2016, we expect to see the real Obama, not Obama: prisoner of the elections.”

He adds, “Concerning Arabs and Muslims, the greatest failure of the Obama administration in the last four years was the non-execution of his promises in his famous Cairo 2009 speech. And in the United Nations in 2010, where I heard him say that he wanted to see Palestine seated as a new member of the UN General Assembly the following year.” The author goes on to highlight that in 2011, President Obama led a campaign against Palestine’s membership.

She says in her article that “Obama's victory will put him in a challenging position, to lead a movement toward Syria, be it through a dialogue with Russia regarding a possible solution or not.”