Shlomi Eldar writes that post-Assad Syria will be a vast campaign of retaliation. 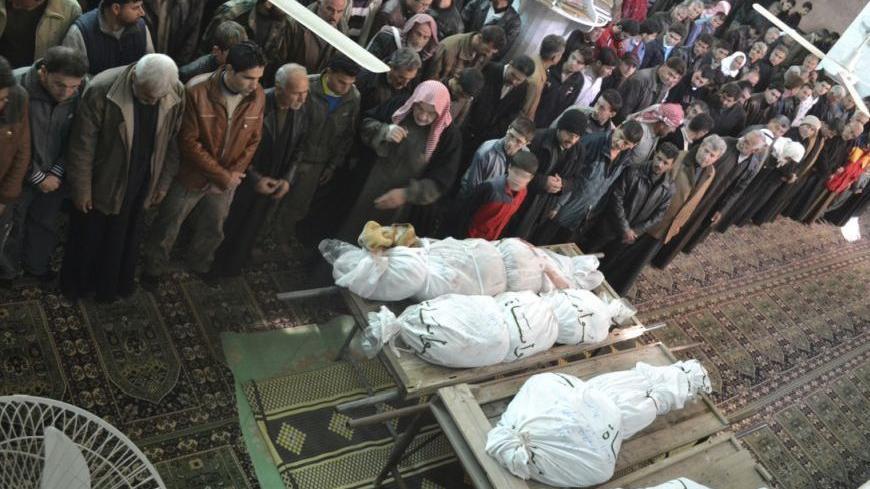 Residents pray near the bodies of people whom activists said were killed during fighting with forces loyal to Syrian President Bashar Al-Assad at Marat AL-Numan, Dec. 26, 2012. - REUTERS/Raed Al-Fares/Shaam News Network/Handout

When the Asharq Alawsat newspaper reported that the U.S. and Russia had reached an agreement that [Syrian President] Bashar al-Assad's term in office would soon end, Russian Foreign Minister Sergey Lavrov was quick to refute the news. “Assad isn’t going anywhere,” he announced, “and it doesn’t matter what anyone says.” By “anyone,” he most certainly meant China and Russia.

He was right, of course. Assad really isn’t going anywhere unless he is led away by force because, just like Louis XIV of France, Assad rules under the conviction that L’état, c’est moi. Like other despots in the region, he sees this bitter battle as more than just a personal struggle to survive. Assad believes that the life and future of an entire nation is at stake, and that he bears the ultimate responsibility for that nation’s future. Then again, [Former Egypt President] Mubarak also thought that his fate was inextricably linked to the fate of Egypt, and he continued to believe that even as he was borne on a stretcher to the defendants’ cage in a Cairo courtroom. [The Libyan ruler Moammar] Gadhafi remained convinced that the people loved and esteemed him, like children who love and esteem their father, even while those same children were tearing him to shreds. It should, therefore, come as no surprise that Bashar al-Assad is still convinced that he is “a lion, the son of a lion.”

Yet Assad’s ability to survive longer than Mubarak or Gadhafi does evoke a sense of awe. By the way, it is probably worth noting that politically, Assad has survived even longer than retiring Israeli Defense Minister Ehud Barak, who predicted over a year ago that Assad has just “a few weeks left in power.”

Nevertheless, it now seems certain that by this time next year Assad will no longer be clinging to the presidency he inherited from his father, Hafez, like a lion gripping its prey between its teeth.

I have no idea whether the rebels will eventually capture and lynch him. He may yet flee the country with the help of what remains of his army, so that he and his wife, Asma, ever the consummate shopper (including online shopping, when possible), can find some other place, somewhere in the world, where he can live out his life in luxury. Only one thing is certain. The shy grin of a scolded child spread constantly across his face — the expression of a man telling everyone around him that, “I’m only here because of my father. The truth is, I have no idea what I’m actually doing here”— will twist and contort into a look of terror.

I am the first to admit that regardless of whether then images show his capture or his harried escape, with loyal Republican Guards firing in every which way to save not only his skin but theirs, I will be glued to my TV set. It doesn’t even matter how harsh and graphic those images are. I did not turn away from the shocking photos from Homs, Daraa and Aleppo, where countless corpses lined the streets in a horrific procession of death.

Assad will go, and he will leave the people of Syria — Sunnis, Druze, Christians, and even Alawis — bleeding or buried in mass graves. That mortal son of Syria will be gone, and a new era will dawn upon the county: the era of revenge.

It is a mistake to infer that what happened in Egypt will repeat itself in Syria once Assad is gone. Syria’s saga is completely different. Certainly, Egypt was in turmoil after the Revolution. The Muslim Brotherhood faced off against the Salafis, and they both faced off against the young liberals, who saw their hopes shattered as the Revolution was stolen out from under them. But Egypt is different. Despite the turmoil, the Land of the Nile was able to maintain a basic semblance of order, based on a deep sense of patriotism and a profound concern for the country’s fate.

Egypt experienced an ideological, political, democratic and religious revolution that culminated in the approval of the country’s new Constitution on Saturday [Dec. 22]. Syria experienced — and continues to experience — a brutal war waged by one man, the scion of a single Alawite family, who was willing to do whatever it takes to maintain his grip on power.

Assad is the son of a man who showed no mercy on the 20,000 people of Hama, slaughtered in February 1982 because they rose up against his solitary rule and protested the favoritism that he showed to his own ethnic group, at their expense and the expense of the rest of the country. Hafez al-Assad (whose name means, “Guardian of the Lion”) sent his army to teach Hama a lesson. He wanted to intimidate the rest of the population by showing them the cost of daring to oppose him. As for his son Bashar, the apple did not fall far from the tree.

The “Guardian of the Lion,” Hafez al-Assad, is gone, but he left behind an “Evangelist” (the meaning of the name Bashar) to share his gospel with the next generation. This younger Assad may have taken the Hippocratic oath, which enshrines the supreme value of life, but he found his comfort zone in the service of death. Maybe it is because the practice of death, like a medical practice, is accompanied by the sobs of infants and children and the groans of broken men and women.

Syria did not get caught up in a civil war. It collapsed beneath the burden of jackbooted troops loyal to Bashar al-Assad alone. They were willing to fight against their own people, because they feared losing their positions of power more than they feared God Himself.

One question remains: How does anyone go about rebuilding a country where more than 40,000 of its people (according to opposition figures) were slaughtered in cold blood … and the blood continues to flow? How does anyone deal with the tens of thousands of people who were injured, the tens of thousands more who are missing, and the hundreds of thousands who are now homeless refugees? How does one comfort an entire generation of young people that experienced the bombardments and witnessed the Shabiha (as Assad’s bloodthirsty thugs are known) conduct their massacres. An entire generation is left scarred, physically and emotionally.

We’ve already seen the splintered Syrian opposition with all its different factions hold endless meetings in Turkey and in Cairo. At these meetings they proved unable to put their basic differences aside and agree to the wording of even some terse press release or other. What will happen when they fight over the decrepit inheritance left behind by the “Son of the Guardian,” once he has forfeited his own legacy? What will happen to the land that once stocked the larders of the Levant with the finest produce and goods? What can come of its bleeding and defeated corpse, now that all these different factions are locked in struggle over who will inherit the best shares?

If the world watched in silence when thugs slaughtered children in the rebel-held neighborhoods, it is likely to remain silent once again.

The world remained silent because events in Syria did not send a tremor through the global economy. The pistachios of Aleppo were no match for the oil wells of Ras Lanuf in Libya, and neither the fruits and vegetables nor the cotton irrigated by the Orontes River are worth much to a world that sees itself as a global village, but where estrangement and cold personal interests continue to dominate.

Next year the rebels will seize power in Damascus, and Mother Russia, which once bore the weight of both the Lion and his son the Lamb, will lose the foothold that it had in Syria since the 1950s. [Russia's President] Putin will try to arm the new regime with the latest weaponry. His foreign Minister and lapdog Sergey Lavrov will certainly apologize and explain that all that Russia really wanted was to reach an agreement that was acceptable to all the feuding parties. Syria’s problems would have been better served, Lavrov will go on to say, if the solution came from within, rather than being the result of foreign intervention. But Putin will not be easily forgiven. The Syrian people will long remember how he extended the life of the raging lion and contracted deals signed with their blood for his own sake and for the narrow interests of his superpower.

Nor will Iran be pleased with the new government, which is unlikely to forgive her for the companies of Revolutionary Guards that settled in Syria to advise and train its armed forces, and which provided the devastating weaponry launched against a vulnerable population. Similarly, Assad’s ally [Secretary-General of the terrorist group Hezbollah, Hassan] Nasrallah will be forced to dig a deep pit, where he can either hide or be buried.

And who will assume the leadership of Syria? Will the country undergo a natural process in which the Muslim Brotherhood will rise to ensure religious rule and social renovation, just like it did in Egypt? That is very doubtful.

All things indicate that the day after Assad falls will see the emergence of a vast campaign of retaliation. Never before will the Middle East have witnessed a settling of accounts of this scope against those who killed and those who cause grievous bodily harm, between those who raped and those who robbed. It will even encompass all of those who simply watched from the sidelines but did nothing to defend the sanctity of human life.

The once clear waters of the Orontes River have since been dyed blood red. They will continue their slow progression to the sea, but their ruddy complexion will prevent anyone from forgetting the call for bloody vengeance. For thousands of years the Orontes granted God’s gift of fertility, produce and life itself to countless generations. Its waters will continue to stream through Hama, but even that will not be enough to wash away the traces of the crimes committed there. That will take considerably longer than a single generation.

“The sons and daughters of our beloved Syria” will be forced to wait for some other time before a new leader will rise from the ruins. He will be a strong but merciful leader, whose main message will be that human life takes precedence over the life of a ferocious lion. Let’s hope that the Syrian people don’t have to wait too long for such a leader to arrive.