Iran's state media outlets have released a video of Alireza Akbari allegedly confessing to his crimes a day after his death sentence was upheld by the country's Supreme Court. 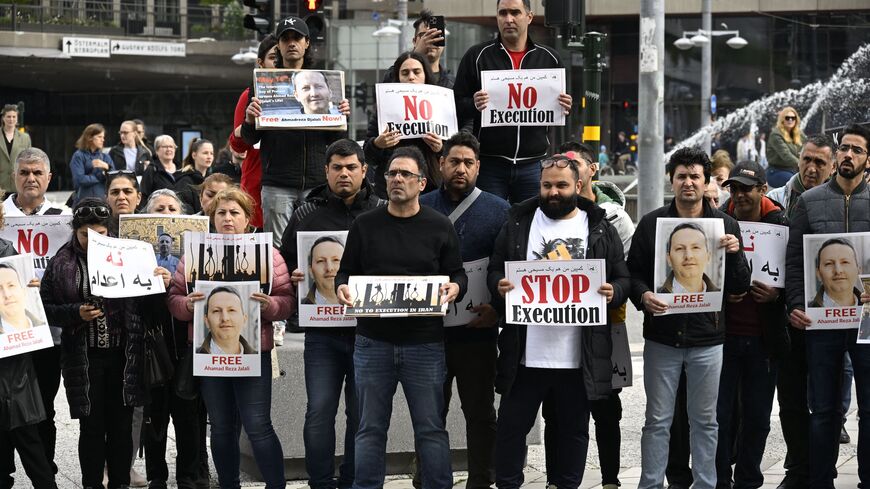 Demonstrators hold posters with a portrait of Swedish-Iranian doctor and researcher Ahmadreza Djalali (Ahmad Reza Jalali), who is imprisoned and sentenced to death in Iran, during a protest on May 14, 2022, in Stockholm, Sweden. - ANDERS WIKLUND/TT News Agency/AFP via Getty Images

Iranian state media published a video on Thursday claiming that British-Iranian national Alireza Akbari, who is facing execution for alleged spying, played a role in the 2020 assassination of Iran's top nuclear scientist.

The 10-minute video posted on government-linked outlets showed Akbari speaking in different interview settings. In it, he recounts how he was initially approached years ago by an unnamed UK ambassador in Tehran as well as MI6 agents. He is then seen explaining vaguely how he was requested to pass on information concerning top Iranian officials involved in the country's controversial nuclear and missile programs. The video alleged Akbari was involved in the murder of prominent Iranian military scientist Mohsen Fakhrizadeh, assassinated in an attack right outside Tehran in 2020.

Captions note that Akbari was arrested for espionage in 2008 but was released on bail before relocating to the United Kingdom, where he was granted British citizenship. The circumstances under which he was rearrested remain unclear, but it appears that the former official had frequently traveled back and forth between the two countries.

Akbari, 61, who holds dual British citizenship, was sentenced to death by Iran's judiciary for espionage for the UK government, according to Iranian media reports.

His arrest and the investigation, proceedings and even the initial court ruling were all kept away from the public before the news of the final sentence and videos of his "confessions" surfaced on Thursday.

Hours after the release of the video, at least two state-affiliated outlets claimed that Akbari had already been hanged that day.

In an audio file obtained by BBC Persian, Akbari dismisses all the allegations leveled against him. He says the Iranian Intelligence Ministry possesses "absolutely no evidence" to prove its claims. "They are taking revenge on a third country, whose nationality I hold, because they are in a state of tension with that country."

The ex-official has over the years also been a close associate of Ali Shamkhani, the current secretary of Iran's Supreme National Security Council. In the audio file, Akbari says interrogators "have accused me of giving a bottle of perfume and a T-shirt to Shamkhani in exchange for top state secrets." Akbari's wife has attested that he was tortured and held in solitary confinement.

The London-based Iran International quoted informed sources as saying that the verdict was pushed by the Islamic Revolutionary Guard Corps (IRGC), which is aligned with the Iranian judiciary and the sitting administration of hard-line President Ebrahim Raisi.

The verdict coincided with flaring tensions between Iran and the United Kingdom, which is reportedly planning to designate the IRGC as a terror organization. British news reports have said the move is a response to the IRGC's arrest of several UK-linked individuals during the ongoing anti-government unrest in Iran.

At least three other dual nationals, Ahmad Reza Djalali (Sweden), Habib Chaab (Sweden) and Jamshid Sharmahd (Germany) are currently known to be on death row in Iran for similar espionage and security convictions.

Iran has long been criticized by Western states for its practice of taking dual and foreign nationals hostage on weak allegations as a pressure tactic to elicit concessions and advance its own foreign policy agenda.

As recently as Tuesday, Belgian aid worker Olivier Vandecasteele was handed 40 years in prison by a Tehran court, a verdict widely seen as the Islamic Republic's measure to force the release of an Iranian diplomat serving time in Belgium on terror-related charges.