The European Parliament adopted a resolution calling on the European Union to blacklist Iran's Islamic Revolutionary Guard Corps and to sanction the Iranian leadership. 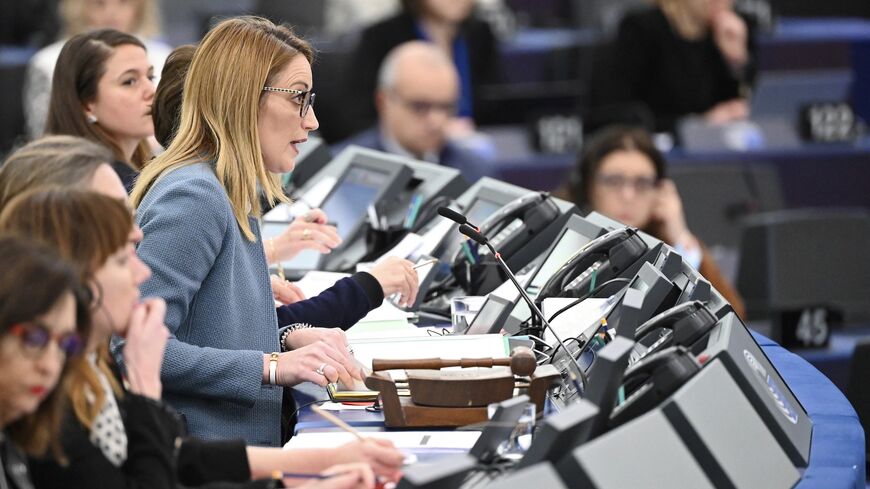 PARIS — The European Parliament passed a resolution on Thursday that calls for designating Iran's Islamic Revolutionary Guard Corps (IRGC) as a terror group.

The blacklisting would include the IRGC and its subsidiary forces, the paramilitary Basij militia and the Quds Force. The resolution, sponsored by some 60 parliamentarians from different wings of the parliament, was adopted with a large cross-party majority.

The vote was by a show of hands with an overwhelming majority supporting the resolution. It follows the adoption of a measure on Wednesday backing the effort.

Meeting in Strasbourg, France, the parliament also called on the European Union to expand its sanctions lists to all individuals and entities responsible for human rights violations in the country, including Supreme Leader Ayatollah Ali Khamenei, President Ebrahim Raisi, Prosecutor General Mohammad Jafar Montazeri, Iranian charity organizations (Bonyads) linked to the IRGC and the 227 members of the Iranian parliament who called on the judiciary to make use of the death penalty. IRGC members or affiliated individuals would be banned from any economic and financial activities on European soil.

In the resolution, the European Parliament welcomed British preparation for the inclusion of the IRGC on its list of terrorist organizations and called on all like-minded countries to do the same.

The resolution reiterates previous condemnation of the rapidly deteriorating human rights situation in Iran, calling on the Iranian authorities to respect ethnic and religious minorities and the LGBT population's fundamental rights and freedoms. It condemns arbitrary detentions, torture and execution of demonstrators.

Iranian Foreign Minister Hossein Amir-Abdollahian warned on Wednesday EU foreign policy chief Josep Borrell against that the EU would ''shoot itself in the foot'' by blacklisting the IRGC.

On Tuesday, parliament members discussed six motions for a resolution on the EU’s response to the protests and executions in Iran. The proposals were submitted from across the political spectrum. An open letter in support of action was signed by 117 European legislators from across the political map and published last week. After discussing the six motions, the factions negotiated the resolution's final text.

Croatian parliament member Tonino Picula said at Tuesday’s debate, “We have to continue to strongly support the Iranian people. It’s crucial to call for a decisive European Union response. The Revolutionary Guards must be put on the list of terror organizations. Our message to the regime must be loud and clear: Stop killing your people!"

A senior Israeli diplomat expressed satisfaction over Tuesday’s debate and Thursday’s vote, and told Al-Monitor that while a resolution by the European Parliament isn’t binding, it reflects growing public awareness of the Iranian threat. For left, center and right parties in the European Parliament to agree on such a topic is not trivial, and could certainly influence a decision by the EU leadership next week on more sanctions against Iran.

Another Israeli diplomatic source told Al-Monitor that several factors were responsible for the shift in the European position. The first was the military rapprochement between Iran and Russia. Tehran has been supplying Moscow with attack drones used against Ukraine. The second was the crackdown in recent months on Iranian demonstrators and Tehran's repeated human rights violations, which have generated very strong reactions from Brussels and EU member states. Then, the source said, there was a realization in the West that a new Iran nuclear deal cannot be expected in the near future. Several senior American officials, including President Joe Biden, have indicated as such in recent weeks.

All these developments, said the source, have created a new situation in which the Israeli and European stances on Iran have become much closer.

A well-informed source in Jerusalem told Al-Monitor that the European foreign ministers will advance a fourth round of sanctions at their next meeting in Brussels on Jan. 23. Still, the source said that the ministers will probably not ask the European leaders to blacklist the IRGC, at least not for the moment. Instead, the ministers will advance more sanctions against specific Iranian figures suspected of human rights violations, including travel bans and freezing of assets.

EU leaders are expected to meet in Brussels for an extraordinary summit on Feb. 9-10.