Iranian women are leading the protests in Iran that began after an Iranian Kurdish woman was allegedly beaten to death over her head covering. 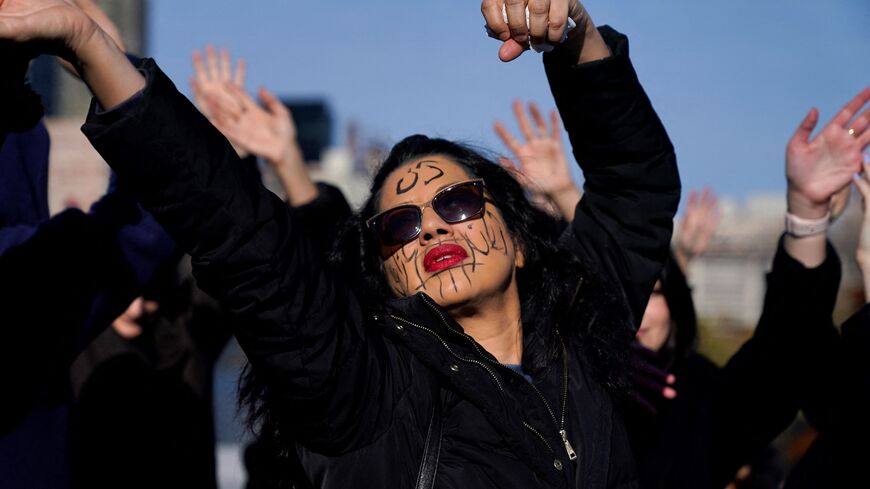 People pose for a photo as artist JR, in partnership with For Freedoms, Vital Voices, and the Woman, Life, Freedom global coalition of Iranian women leaders, holds one of his participatory performances on the lawn of Four Freedoms Park on Dec. 4, 2022, on Roosevelt Island in New York. - TIMOTHY A. CLARY/AFP via Getty Images

The US magazine TIME named on Wednesday the women of Iran, who have been protesting against their government policies and repression, as “heroes of the year."

The New York-based magazine has been naming a “person of the year” for decades, but in recent years it has also started naming “heroes” for their contributions to humanity.

This year, the magazine depicted on its cover a photo of three unveiled young Iranian women, locking arms in defiance of the country's rulers. Wearing the head covering is mandatory for women in Iran.

“The movement they’re leading is educated, liberal, secular, raised on higher expectations, and desperate for normality: college and foreign travel, decent jobs, rule of law, access to the Apple Store, a meaningful role in politics, the freedom to say and wear whatever,” wrote Moaveni.

Iran’s protests began in September following the death of Mahsa Amini, who died after being held in police custody for wearing her head covering improperly. Her death sparked widespread protests and riots throughout Iran, in addition to a violent government crackdown that has left at least 200 people killed and thousands arrested, according to human rights organizations.

Numerous videos on social media have shown Iranian women taking off and even burning their hijabs in protest. A Kurdish-language slogan, “Women, life, freedom,” has become the rallying cry of the demonstrators.

Many Iranians on social media shared the image of the Time cover in celebration.