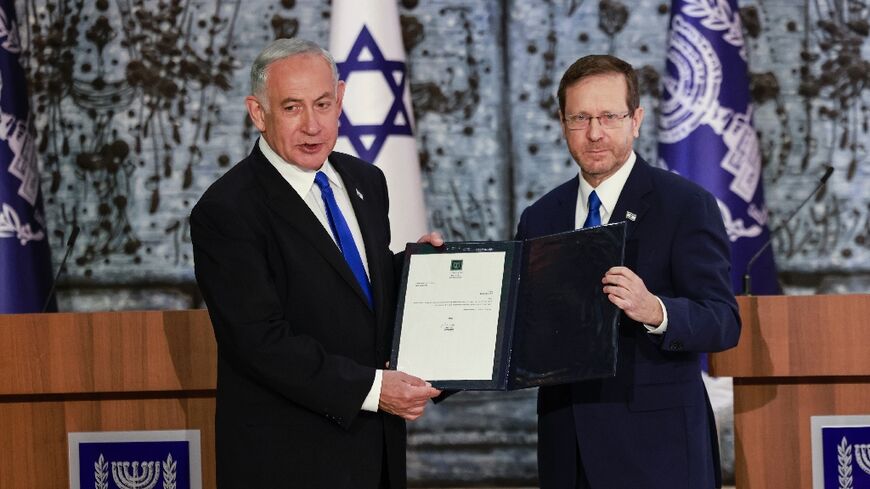 Israel's prime-minister designate Benjamin Netanyahu asked Thursday for a two-week extension in forming a coalition government with his ultra-Orthodox and extreme-right allies, days before the initial time frame elapses.

The November 1 election put former premier Netanyahu in a position to form a stable, right-wing government, ending an unprecedented period of political deadlock that forced five elections in less than four years.

President Isaac Herzog on November 13 tapped Netanyahu to form a government with the backing of factions representing 64 out of 120 lawmakers in Israel's parliament.

"We are in the midst of negotiations and have made much progress, but judging by the pace of things, I will need all the extension days provided by law in order to form a government," Netanyahu said in a letter released by his office.

By law, the president can grant up to 14 additional days for negotiations.

But the agreement with Shas and another ultra-Orthodox bloc, United Torah Judaism, are provisional, not binding coalition agreements.

Additional pacts will be required before a government is announced, the parties have said.

"There are still issues that have not been resolved regarding the allocation of positions," Netanyahu wrote in his letter to Herzog, noting the premature nature of the Shas and United Torah Judaism agreements.

While some Israeli political analysts had forecast Netanyahu would move to announce a government days after receiving the mandate, coalition talks have proved complex.

Netanyahu was forced to give sensitive portfolios to controversial figures, including extremist Jewish Power leader Itamar Ben Gvir, who is known for anti-Arab rhetoric and is set to be national security minister in charge of border police in the occupied West Bank.

And Netanyahu's allocation of portfolios to members of his own party has also yet to be finalised.

Another complication is that Shas leader Aryeh Deri has been convicted of tax offences, which, according to Israel's attorney general, bars him from serving in cabinet.

Israel's parliament, where Netanyahu and his allies now control a majority, may seek to pass legislation allowing Deri to serve in cabinet before firming up a coalition deal.

Under the provisional Shas-Likud agreement, Deri will be both interior minister and health minister in Netanyahu's next government, in addition to being named deputy prime minister.